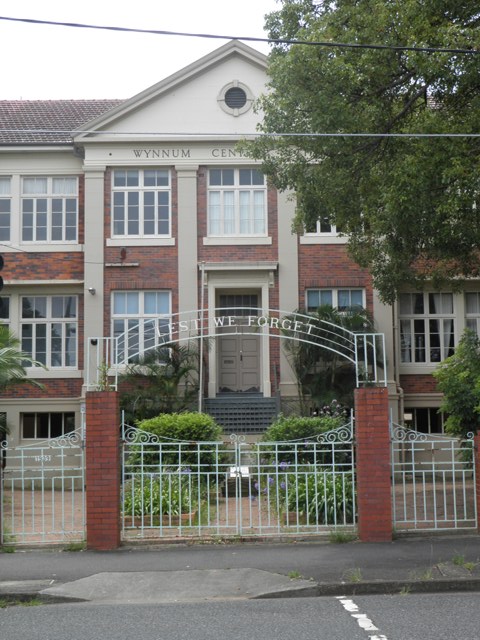 Wynnum Central School opened as Wynnum State School in February 1896, providing a centrally-located educational facility for the growing Wynnum-Manly area. A timber classroom building fronting Charlotte Street was constructed for the school in 1895, partly funded by the local community. Additional classrooms were built in 1901, 1907, 1917 and 1919 and the school was renamed Wynnum Central State School in 1910. The site includes an imposing two-storey brick building, erected in 1949 (with additions in 1953) and designed in the Georgian Revival style favoured at the time. Striking War Memorial gates were added in 1954 but have since been removed from the site. In January 2011 Wynnum Central State School was closed when it was amalgamated with Wynnum North and Lindum to form Wynnum State School and the students moved to a different site.

The suburb of Wynnum was first settled by Europeans in the mid-nineteenth century with the first land sales occurring in the 1860s. Settlement was fairly slow until the railway was extended out to Cleveland in 1889.  This not only encouraged an increase in suburban development, but also provided greater access to the sea for Brisbane residents. By the late nineteenth century Wynnum had become a seaside resort town where Brisbane city dwellers would come to spend their weekends. This, in turn, became an impetus to further commercial and residential development in the area.

As the area grew, the need for local educational facilities arose. Prior to the establishment of the school at Wynnum, the closest school available to the district was at Lytton. This was a concern to the Wynnum and Manly residents as it was difficult for the smaller children to travel there every day. It was felt that as the district’s population was expanding a local school was required. At a public meeting in 1892 a committee was appointed with the task of finding an adequate site for a new school. Later that year a petition was sent to the Department of Education requesting a new school for the Wynnum and Manly area. The Department refused the request and stated that they would not “erect a new school while Lytton State School was in existence”1.

Although disappointed by this, the community did not give up. In 1894 another request was given to the Department of Education. This time a case was presented that showed that from 1890 “the number of residences in the Wynnum Division had increased from thirty-seven to 134, and eleven were then in course of construction”1. Thus, the construction of a new school could be justified. Once again the Department of Education refused the request, concerned that if a new school was built at Wynnum the Lytton school would be affected with low enrolment numbers and ultimately be closed. This would have a negative impact on the Lytton community.

Finally, in 1895 after further lobbying from the Wynnum and Manly community, the Department of Education approved the request for a school to be established in the Wynnum district. The new school site was pegged out in July 1895 by the Works Department’s chief draftsman, Mr. Pye. A timber classroom (Building A, teacher’s residence, fence and toilets were constructed by A.W. Herd in 1895 at a cost of £730. Funds were provided by both the government and the community. The new Wynnum State School was officially opened on the 24 February 1896 with the capacity for 125 students. The official student enrolment number was 89.

In 1900 a play-shed was constructed in the grounds. In 1901, with enrolment numbers increasing, a new timber wing was added to the original timber school building (Building A). In 1902, a community funded gymnasium was established in the grounds and a flag-pole erected; the flag was given to the school by the Department of Public Instruction. By 1907 the accommodation at the school was becoming increasingly crowded, the Brisbane Courier reported “the Wynnum school was overcrowded, and the children had to remain out in the playshed and in the space under the school”1. As a consequence of this overcrowding an additional wing was added to the original school building (Building A) in 1908. By 1909 the number of enrolled students had reached 343.

In 1917 an open-air timber annexe building (Building B) was constructed beside the original school building (A) that provided further classrooms as well as a teacher’s room.  In 1919 another timber classroom building was erected to the west of the original building that provided more classrooms. This building was relocated to Lota State School in 1951. In 1923 a War Memorial commemorating those who died in the First World War was erected in the school grounds along the Charlotte Street frontage. This memorial was a drinking fountain and was designed by respected Brisbane architect E.P. Trewern.

Enrolment numbers at the school continued to rise in the interwar period and by the close of the Second World War it was apparent to the parents and teachers at the school that radical improvements were necessary. In 1944 the Parents and Citizens’ Association applied to the Department of Public Instruction for the construction of a new school building. In 1945 the Department recognized this need and in the same year extensive plans for a two-storey, plus basement, brick school building were drawn up by the Department of Public Works’ architect, E. Cooper. In 1946 an article in the Courier Mail stated that “Wynnum Central is to have a new State primary school, estimated to cost £25,000. It will be one of the most modern in Queensland…It is proposed to build one section for a start. This will contain nine class rooms with accommodation for 400 pupils”1.

The first phase of construction was completed in 1949 and officially opened in February that year. This first wing of the brick school building was the eastern wing as well as the entrance and front stairs (Building C-a). The second phase of the construction, the western wing, was completed in 1953 (Building C-b). While the majority of brick schools constructed in Queensland date from the 1930s, a number were constructed during the war and in the post war period. This is one of the later, large and impressive brick suburban schools to be constructed. The design of the impressive brick and masonry building follows the Georgian Revival style, popular for civic buildings at the time.

In 1953 a set of Memorial Gates were constructed at the Florence Street entrance, outside the brick building (Building C). The gates were a memorial to those who lost their lives in the Second World War. These gates have since been removed from the site. The First World War memorial fountain, originally fronting Charlotte Street was moved behind the Memorial gates in the 1950s. Only a stone plinth within a small garden at the front of the brick school building remains.

as it is an early school developed for the education of local children in 1896, and subsequently expanded to meet the requirements of the growing population of the Wynnum district.

as the nineteenth century timber school building and the Georgian Revival style two-storey brick building, incorporated education and design philosophies of the time of their construction.

as it has a longstanding connection with local residents, generations of whom received their education there.