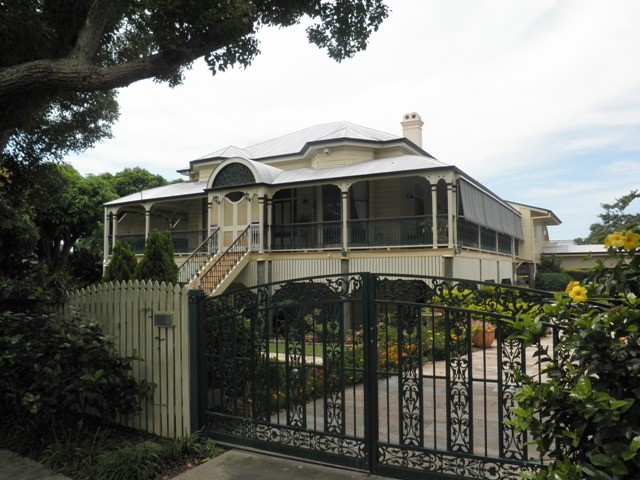 ‘Tingalpa’ or ‘Stratford Villa’ was built by 1916 for Alfred Charles Jeffery, former chairman of the Wynnum Divisional Board (1894-1905). The house was sold to the Paton family in 1916 and remained in the family ownership until 1980.

‘Tingalpa’ or ‘Stratford Villa’ sits on land that was originally part of seventy-two acres bought by a Brisbane investor for £72 in 1861. Although it passed hands several times, the site remained undeveloped in the nineteenth century, which was not uncommon for land in Wynnum. Land sales had commenced in the 1860s and large swathes of land were sold, often to wealthy Brisbane residents, who left much of it vacant or used it for agriculture. The region grew in a limited way after the extension of the railway line to Wynnum in 1889 and to Wynnum South in 1898. Schools, churches, hotels and some residences and boarding-houses were established, primarily clustered around the foreshores and the railway line. The proximity to both central Brisbane and the bayside made Wynnum an appealing holiday destination, though there were relatively few permanent residents.

The site was acquired by Alfred Charles Jeffery in 1897. A Queen-street accountant, Jeffery had also been elected to the Wynnum Divisional Board in 1894 and also served on the Wynnum Shire Council from 1901-05, including a time as Chairman of the Council. Up until 1905 Jeffery appears to have been residing at ‘Kingscliff’, the residence of his employer TW Thomason of Thomason, Charter Limited.

Jeffery sold the property in February 1916 on leaving for England where he was married. It went to auction where it was described as ‘a splendid residence property with magnificent views’. The 3 rood property contained ‘Stratford Villa’ which the advertisement stated was ‘a substantial and well-built Villa Residence, containing 44 large and lofty rooms, with 5ft Hall right through, Smoke-room, Kitchen, Servant’s room, Pantry, and Bathroom, with Enamelled Bath and Wash Basin, 8ft Veranda front, side and back, 3 1000-gallon tanks, gas throughout, D. Brick Chimney, Darkroom under house.’

The residence was acquired in the name of Eliza Jane Paton, wife of William Paton. Paton, a well-known Brisbane contractor, had worked on a number of major Brisbane projects including the General Post Office.

By the time the Paton family acquired ‘Stratford Villa’, Wynnum had become a well-established locality and was on the cusp of greater development. The proclamation of Wynnum as a town in 1913 enabled the Wynnum Town Council to focus on civic improvements, including recreation reserves and bathing facilities on the Moreton Bay foreshores. A building boom in the early 1910s saw Wynnum’s growth accelerate, so that by 1920 the area featured a School of Arts, gas works (enabling the supply of public lighting and reticulated gas), theatre, bowling club, golf course, shopping precinct and several parks and churches. Heritage-listed buildings constructed in this decade include the Mount Carmel Convent (1915) and Guardian Angels primary school (1914).

The Patons resided in the house from around 1916 until the early 1940s, celebrating their golden wedding anniversary at the residence in 1931. Eliza Jane Paton retained title of the land until her death in September 1940, when the property passed to Alice Jessie Paton and Lillie May Paton. William Paton passed away in 1941. Some alterations to the house are believed to have been made during the 1940s.

When Alice Paton died in 1980 the property came into the ownership of Perry and Heather Panos, who subdivided it in 1988, selling this residence to Colin and Yvonne Dell in 1989. Architect Gregg Winkle oversaw the renovations that were done during this ownership.

as a large residential building developed in the pre-Depression era.