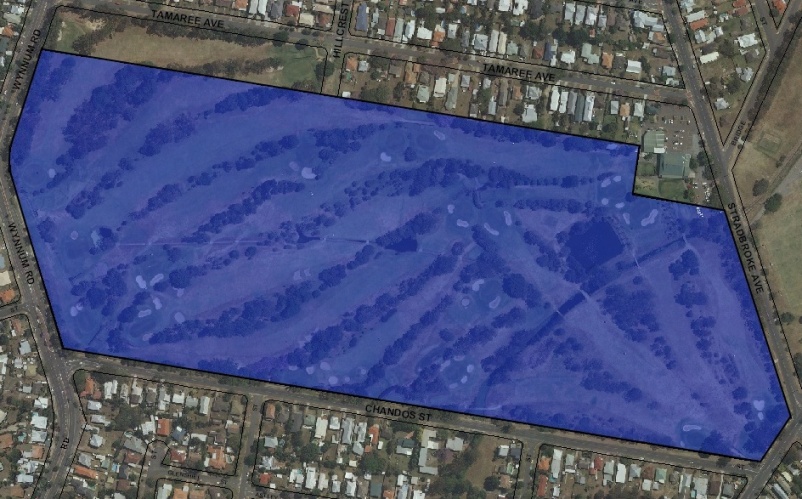 As only the third metropolitan golf course established in Brisbane, Wynnum Golf Course is important for its association with the development of golf as a popular recreational sport in Brisbane. As a purpose-built playing field for the playing of the game of golf together with associated clubhouse and other structures, Wynnum Golf Course is important in demonstrating the principal characteristics of a golf course. As a designed landscape distinguished by distinctive perimeter plantings, a meandering watercourse, wooded areas, a pattern of weaving parallel fairways and distinctive mature trees, the course is an important visual element in the streetscape. The course is important as a place for the local and wider community to play and engage in organised sport and to meet and relax informally. Managed and developed by the members and associates of the Wynnum Golf Club, the course is important for its association with the Wynnum Golf Club.

The area now known as Wynnum was surveyed by James Warner in 1859 and the first land auction took place in 1860. The Bayside suburbs of Wynnum and Manly were known as Oyster Point and Wyvernleigh and most of the initial settlement was concentrated in the Wynnum North region. The arrival of the railway in 1889 ensured that the area surged ahead and Wynnum developed as a popular seaside holiday location, with many guesthouses and camping sites.

In 1902 the Wynnum Shire Council was created and in 1913 it became the Town of Wynnum and was amalgamated in the Greater Brisbane Council in 1925. The area has gradually developed as a series of dormitory suburbs of Brisbane, with the local industries of fishing, boating and other activities associated with the Port of Brisbane. The district is conveniently linked to the city, and its cool sea breezes, bay views, and friendly “country town” atmosphere are highly valued by its residents and visitors.

GOLF HISTORY
The origin of the game of golf is uncertain. However, it is generally thought that the game was being played in Scotland around the 15th century but did not gain wide acceptance outside Scotland for sometime. It was not popular in England until the second half of the 19th century.

Between 1870 and 1890, the number of golfing organisations in the United Kingdom increased from 34 to 387. The Victorian era in Great Britain coincided with an extended period free from major conflicts and, coupled with the development of its colonial empire, brought great prosperity to England and the growth of the middle classes of society. As golf was a social game providing the opportunity for extending the range of personal and business contacts, the newly prosperous merchants and industrialists were attracted to golf and could afford the cost of developing new courses. In addition, the invention of the grass mower made course management easier. Much cheaper that the old feathery ball, the introduction of the gutty (guttie) ball around 1850 brought the cost of the sport within the reach of a wider cross section of the population.

The major expansion of the game around the world began in the late 1880s and early 1890s with the migration of British players taking their equipment with them and forming clubs in their new lands.

The earliest record of a golfer in Australia is of Alexander Reid, who played at “Ratho” in Bothwell, Tasmania in 1822. In subsequent years, golf was played sporadically in various places in the southern Australian colonies. Royal Melbourne Golf Club was founded on 2 May 1891 and is the oldest club in Australia with a continuous playing history.

The establishment of the game in Queensland lagged behind that of the southern states. Queensland was settled more slowly than the south and was less wealthy. It is generally accepted that the Ivory brothers were the first to have played the game, laying out holes on their Eidsvold station during 1880s. The first golf club established in Queensland was the North Queensland (now Townsville) Golf Club, formed 4 January 1893. Toowoomba Golf Club was the first club founded in southeast Queensland holding its initial meeting in August 1896.

The pioneers of the game in Brisbane were immigrants from Scotland, England and Ireland. In the mid-1890s, the arrival of the new colonial Governor and keen golfer, Lord Lamington, was a boost to the popularity of the game in Brisbane. Organised golf began in Brisbane 4 November 1896 with the formation of The Brisbane Golf Club. Lord Lamington was the first president and his regular participation in the Club’s competitions ensured golf was seen as a socially desirable game to play. It was 24 years before another metropolitan club was formed – (Royal) Queensland Golf Club was formed 19 August 1920.

The intervention of the First World War delayed the formation of metropolitan clubs but also appears to have stimulated interest in the game among a wider section of the population as evidenced by the number of new clubs formed during the 1920s.

Generally, the cost of equipment and the restricted access to relatively expensive club membership had kept golf as a preserve of the middle and upper classes of the community. This changed with the improved economic conditions experienced during the relatively buoyant 1920s. Golf flourished in Brisbane in the 1920s and into the 1930s and Brisbane clubs formed at this time were Wynnum (1922), Sandgate (1922), Goodna (Gailes) 1924, Indooroopilly (St Lucia) 1925, Oxley (1928) and Nudgee (1929).

However, with the Depression of the 1930s and then the Second World War, many clubs struggled to attract new members and retain existing membership. Membership and attendances fell, petrol and liquor rationing affected income and new golf balls were unobtainable. Course maintenance suffered with enlistment in the services and engagement in war related work leaving few able bodied men available for such work. Membership fell across all metropolitan clubs. At Wynnum membership was 131 in 1939 and had fallen to 94 in 1944; Ashgrove had a membership of 120 in 1939 and 45 in 1944; Victoria Park, the only municipal course in Brisbane, had a membership of 360 in 1939 which had fallen to 228 by 1944.

The game of golf has seen many changes during the 20th century. Some of the mystique and romanticism has been lost with the change from names like brassey, spoon, cleek, niblick, mashie to the modern numbering system for golf clubs; early sets of 6 or 7 clubs were easily carried in a light weight canvas or leather bag in contrast to the 14 clubs now towed on a buggy; improvements in the equipment – club shafts have changed from hickory to steel to graphite and balls have been greatly improved for durability and distance – have encouraged committees to lengthen and tighten their courses. The introduction of water hazards, bunkers, mounds and undulating greens are all attempts to offset the advantages the improved equipment has given the modern player. Advances in course machinery and equipment, grass propagations and course watering have greatly improved course presentation.

Due to the cost of establishing private clubs, few have been formed in and around Brisbane since the Second World War. However, numerous resort courses have been developed in the coastal tourist areas. Demand for membership of existing clubs has generally been strong during the 1990s and golf continues to be a popular sport in Brisbane.

WYNNUM GOLF COURSE
Golf in the district of Wynnum began when Wilson Kerr and A.G. Oliver laid out a nine-hole course near the Wynnum North railway station in the early 1920s. The Wynnum Golf Club was formed at a meeting in the Wynnum Town Hall 19 July 1922 with the mayor, J.W. Greene, accepting the role of first president. Wynnum Golf Club was the third metropolitan golf club in Brisbane (after Brisbane Golf Club, 1896 and Royal Queensland Golf Club, 1920). A membership of 91 was enrolled in the first year.

An offer was made and a deposit paid for a parcel of land known as Lovekin’s Estate in Wynnum. The Club failed to raise the balance required for purchase and the Wynnum Town Council took over the contract granting the Club a 21 year lease over the land. Several adjoining small lots were acquired and a number of roads closed to provide a total area of 71 acres. This leasehold arrangement continues for the course. The Club owns the freehold title to the land upon which the clubhouse, workshop, proshop and car park are located.

The first nine holes of the course officially opened for play 28 March 1924, although they had been in use since the previous year. Play at the Wynnum North site then ceased. Work on the second 9 holes began in 1927 and the 18 holes were formally brought into play 15 September 1928. By this time membership had risen to 240. As for all Brisbane golf clubs, the Depression and war years were difficult times but donations and working bees by the dedicated membership ensured survival of the Club and the Course. Purchases of additional land were negotiated in 1939 and 1951 and an extended layout completed by 1953.

The course has been extensively improved over the years with changes to the layout, addition of new greens, installation of major drainage schemes and automatic watering. In 1985 the Club was one of the first Queensland clubs to convert greens to Bermuda 328 grass.

A two-storey clubhouse was opened 14 February 1925. Improvements and extension have been undertaken over the years with major work occurring in 1966 and 1997.

Wynnum Golf Course is an 18-hole golf course constructed on an irregular wedge of land bounded by Wynnum Road, Chandos Street, West and Stradbroke Avenues and private properties fronting Tamaree Avenue. Wynnum Creek crosses the Course from a point about two-thirds east along Chandos Street and two-thirds north along Stradbroke Avenue. An open drain with associated ponds runs through the middle of the Course from the 2nd green to the 15th green.

Holes 1 to 9 and 10 to 18 play out and back to the clubhouse and the tree-lined parallel fairways play across generally flat terrain. The Course is distinguished by clumps and lines of trees which include mature eucalypts and melaleucas. A number of trees stand as distinctive features in the landscape including the tall hoop pine west of the 3rd green. The perimeter plantings to Wynnum Road and Chandos Street mark the boundary of the Course and are a picturesque contribution to the streetscape for the surrounding suburb.

The Course is fenced around the perimeter with a number of gates allowing pedestrian access. Most of the neighbouring properties to the north boundary of the Course have access gates from their backyards directly onto the Course.

The main entrance to the Course and clubhouse is off Stradbroke Avenue. The clubhouse for the Wynnum Golf Club stands to the northeast corner of the Course. Overlooking the Course to the east and south, the spacious two-storey clubhouse with a verandah to the south offers particular views down the 10th, 18th, 9th and 1st holes. A well-stocked proshop and large equipment shed stand to the northeast of the clubhouse. A bitumened carpark runs along Stradbroke Ave and turns into Tamaree Ave.

A brief inspection of the Course reveals that it is generally in a satisfactory condition.

as one of the earliest golf courses established in Brisbane.

a purpose-designed playing field for the game of golf together with associated clubhouse and proshop.

a landscaped parkland distinguished by wooded areas, a meandering watercourse and a weave of fairways.

valued by the local and wider community as a place for playing and engaging in organised sport and for informal recreation.

as the course managed, developed and played on by the members and associates of Wynnum Golf Club.