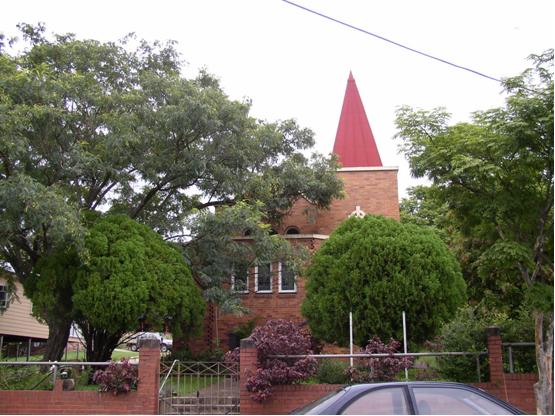 This building, constructed in 1930, was originally known as the Yeronga-Moorooka Presbyterian Church Hall and was built to serve the needs of Yeerongpilly’s growing residential population. The hall was later converted for use as the Yeerongpilly Presbyterian Church and was extended in the 1950s. Following the amalgamation of the Presbyterian, Methodist and Congregational Churches in 1980 the building was taken over by the Uniting Church and renamed St Giles Uniting Church. After operating as a centre for religious worship and social life for the local church community for almost 70 years, the building was converted into a private dwelling soon after it was sold in 2000.

The former church at 53 Nathan Terrace, now a house, was built in 1930 to serve the needs of a growing residential population in Yeerongpilly. The pressure for residential development started with the South Coast Railway passing through the district in 1886.

In 1928 a voluntary committee was formed to raise funds to construct the church. The land was purchased for the sum of 475 pounds and the building was erected as a hall at a cost of 900 pounds. The hall was designed by the architect, Arnold E Brooks and the building was constructed by H Taylor. Seating arrangements were undertaken by Blair Cunningham.

The church was initially known as the Yeronga-Moorooka Presbyterian Church Hall, and later as the Yeerongpilly Presbyterian Church. It was opened on 8 February 1930 by the Moderator of the Presbyterian General Assembly, the Reverend John Sinclair. Reverend Sinclair praise the “zeal, courage and faith of the congregation which had culminated in the building of the beautiful and commodious hall in which they were gathered.”

The building was described in the Brisbane Courier as “an imposing building with roughcast walls and a red roof. The woodwork both inside and out, is either stained or painted brown, and the windows are partly of soft-tinted cathedral glass, and partly in the form of shutters, to allow a greater flow of air than could normally pass through the windows apertures were they limited to the size that was necessary to adequately light the interior of the hall. The interior of the hall itself is tinted to match the windows, with stained wood batons, and stained swing back benches. A silky oak pulpit stands to one side of the platform which crosses entirely the upper end of the hall, and beyond this is a large vestry.”

Built during a time of severe economic depression, the erection of the church hall represented a substantial commitment by the new congregation to have its own place of worship. The church became a sanction charge in 1936.

A 1946 aerial photo of the site shows the presence of the rear extension. This section may have been built at the time or shortly after construction of the church hall in 1930.

In the 1950s St Giles was enlarged with a brick frontage.

This building is located on the northern side of the site close to the site boundary.

Due to the gently sloping site, the building is elevated at the front but can be entered from ground level at the rear and on the southern side.

The building is rectangular in form, timber-framed with a brick perimeter wall and sitting on brick piers. It would originally have had timber stumps.

The exterior walls from floor level have been sheeted with fibrous cement and coated with stucco render.

The original building has timber casement windows, generally in a branch of 3 with internal casement containing 6 panels of obscure glass while each of the outside casement windows are made up of 2 panels of unequal size.

Windows to the rear section of the building are sets of double casements.

The set of casements nearest the front on the northern side has been converted to contain stained glass. Possibly donated as a memorial.

The steeply pitched roof is sheeted in corrugated iron running down to eaves gutters. The eaves are lined with tongue and groove boarding.

The newer brick front section constructed in the 1950s has a flat roof and three leadlight casement windows.

The main entrance doors are located on the front right-hand side of the building. A tower block over the entrance is capped with a spire sheeted with ribbed metal.

Concrete steps enclosed in brickwork with plain steel balustrading lead up to the porch.

as a religious building constructed to serve the spiritual needs of Yeerongpilly's growing population during the interwar years.

as a place of worship and community activity for the Yeerongpilly community for almost 70 years.