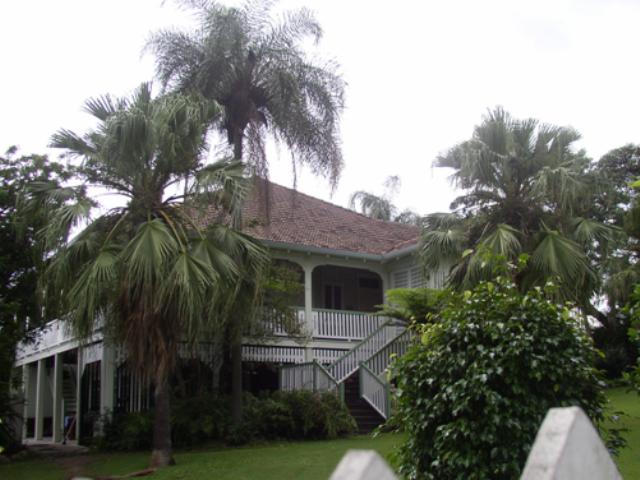 Constructed when Yeerongpilly was beginning to develop as a residential suburb, this large federation styled house was completed sometime between 1913 and 1915 for Samuel and Lillian Roberts. It is significant in demonstrating the pattern of development in Yeerongpilly and is also significant for its aesthetic value.

The rail line to Brisbane had been established by 1884. In the early 1890s the Yeronga district became fashionable as an address for wealthy Brisbane residents and a number of large homes were constructed. In general, residential development in the area in which this house was slow however, impeded by a lack of public transport within the district. The development of Yeronga began in earnest about 1912 and reached a peak of activity after the First World War.

The allotments that the dwelling is located upon were offered for sale as a subdivision by the City Property Realization Company of Queensland Limited. The sale of these allotments took a considerable time and some were still being sold after First World War. George Edward Driver made the initial purchase of allotments 11 to 17 in August 1912. In October 1913 the property was transferred to Lillian May Roberts, wife of Samuel Roberts. The Roberts family built the house soon afterwards and retained ownership until around 1944 when it was purchased by John Aboud. Aboud sold some of some of the allotments (subs 11 & 12) in the early 1950s giving the block its present configuration.

This dwelling presents as an imposing federation styled Queensland dwelling constructed of timber, with a terra cotta tile roof.

The dwelling is of bungalow design and has an “L” shaped verandah with a gabled porch/front stairs entry. Additional features include multi-paned French doors and a flat-top chimney

Situated on a central location on the 4 allotment the residence is designed to make the most of its Crichton and Tees Street frontages and full use of the surrounding grounds as a buffer zone to highlight the residence’s setting. This residence makes a significant contribution to the streetscape.

as it is a large federation styled house constructed in Yeerongpilly prior to the First World War at a time when the suburb was emerging as a residential area.

as it is an outstanding example of a federation styled Queensland house featuring a terracotta tiled roof and restrained detailing.