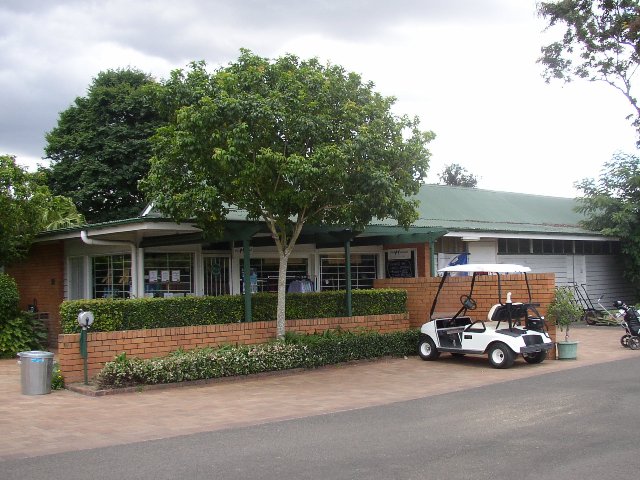 The Brisbane Golf Club was the first golf club to be established in Brisbane, initially at Chelmer in 1896 and then relocated to Yeerongpilly in 1903 following the purchase of roughly 110 acres of land. By 1904 it was the first full-length course in Queensland. The current clubhouse designed by Hall & Dods was constructed in early 1910 and has retained its distinctive Federation-era features, despite being extended over the years. During World War Two the grounds were the site of Camp Tennyson and the First Australian staging camp.

On Wednesday 4 November 1896 a group of eight people assembled at the AMP Chambers in the city to express their interest in forming the first golf club in Brisbane. It was the third in Queensland after North Queensland (now Townsville) and Toowoomba Golf Clubs.

The meeting was chaired by the Rev. George Frodsham and a course was planned for land adjacent to Chelmer railway station that was leased from J. L. Cardno. The first clubhouse, which remains extant at 115 Honour Ave, Chelmer was built in 1897 and designed by noted Brisbane architect Robin Dods - an innovative and influential architect who made a major contribution to the development of housing design in Queensland. This was the beginning of Dods’ long association with the club which continued until his death in 1920.

By 1899 the golf club had grown to such an extent that a larger clubhouse was required. As the land at Chelmer was only leased and urban development was surrounding the course, it was decided to investigate options for a new site for the course. Some years of considering options followed until in 1903 about one hundred and ten acres were offered for purchase at Yeerongpilly. The new site had the advantages of being near permanent water and a railway station for golfers travelling further than a buggy ride distance as well as being available for purchase rather than lease, giving the club security of tenure and future development options. Funds above the £1430 already promised were raised through the issue of £10 debentures to members as well as a bank loan for £1,000. These were substantial sums of money at a time when the club’s bank balance stood at £14/8/4.  The club was one of the few golf clubs in Australia at that time to own its course. Additional land was bought over the years to amass 150 acres.

At a meeting held on the site near an old wattle tree on 6 December 1903 Dods was asked to design a new more commodious clubhouse that was able to be extended. A stand of bougainvillea marks the site along with a plaque commemorating its significance. The design, as illustrated the cover page, was completed in February 1904 and a tender for £516 from De Grant and Smith was accepted for its erection. The clubhouse was completed in May 1904 and the use of the Chelmer course ceased. The first sixteen holes, designed by Carnegie Clark were brought into regular play on 18 June 1904. A garden party to officially open the Yeerongpilly Golf Club was held on 6 August that year. Dods joined the Golf Club committees responsible for greens and link development and as the Club’s Honorary Architect until his death in 1920 made significant contributions to the development of the club. In 1908 the clubhouse was upgraded including being built in underneath and extended.

On 29 July 1909 the clubhouse was destroyed by fire. The cause was attributed to rats chewing on wax matches left in a locker.  Greenkeeper John MacDonald and his family tried unsuccessfully to save the building. A temporary shed was erected immediately and an insurance claim lodged. An extraordinary general meeting a week after the fire determined that a new building, again designed by Dods should replace the old one. As Dods was overseas, his partner Francis R. Hall drew up a more commodious building similar to the previous structure and a tender from J. Miller for £1109/3/6 for its construction was accepted. The insurance claim for £1093/15/- was paid immediately and members did not seek redress for their personal losses so that all the money could be spent on rebuilding. The new clubhouse was completed in 1910.

In 1911 the Golf Club convinced the Railway Department that some trains (on the Corinda line) should stop opposite the clubhouse on holidays and weekends. A permanent platform was constructed in 1912 as well as an earth bank and a wicket gate providing access from the rail line to the golf club. The golf club gate was in use as a stop up until the mid 1950s. To facilitate road traffic a bridge over the rail line was built in 1916. Following World War One, club membership again boomed and the clubhouse required extensions. About this time a building for professional members was also constructed to Dods’ design. The Pro Shop now standing is a substantially extended and altered version of Dods’ building. Following the death of Robin Dods in 1920, prominent architect Richard Gailey became the Club’s new architect.

During the interwar years including the Great Depression major reconstruction works were undertaken on the course and new machinery purchased to assist with course maintenance. During the Second World War when all golf clubs were forced to close golfers made use of another golf club started on the banks of the river at Yeronga in the 1920s. This course was known as the Depression Links as during those stringent years those who could not afford the fees of the Brisbane Golf Club were able to play. The Australian Army took possession of the short course in 1942 and established the 17th Australian Personnel staging camp, and later the 1st Australian Personnel Embarkation Issue Depot. Part of the Yeerongpilly course was the US Tennyson Army Camp built in 1943 under the direction of the Allied Works Council. The fees from this occupation somewhat offset the fall in revenue caused by wartime shortages of liquor, equipment and personnel.

In the postwar years membership expanded and the club prospered. Shower rooms were added to the clubhouse in 1960 and a store and shop added in 1963. $16,000 worth of additions and alterations were made in 1965 and a balcony was added in 1968.

Since 1983 the club has completed extensive earthworks to improve the flow of Moolabin Creek through a re-alignment to eliminate low-lying areas which previously limited play during a wet season. The course has moved from being the wettest course to the best all-weather course. The course is an outstanding open area situated amongst the industrial or commercial operations on all boundaries.

The club’s honour boards list trophies dating back to 1898, which are the oldest in Australia.

The timber and tin clubhouse, dating from 1910 retains core features of its Hall & Dods’ design. The roof form and mitred weatherboards are significant elements and characteristic of Dods’ designs. The nearby Pro Shop is not significant.

as it is illustrative of the development in Brisbane of specialist sporting and recreation facilities in the early twentieth century; and as the first full length golf course in Queensland.

as the golf course retains areas of relatively undisturbed land and is the site of a number of demolished buildings and a wartime staging camp. It may contain archeological remnants of previous uses.

as it is a golf club that has been in operation since 1896 and therefore has an important and longstanding association with the golfing community of Brisbane.

as a clubhouse designed by Hall and Dods, the latter designing previous clubhouses and extensions prior to his passing. R.S. (Robin) Dods was the Brisbane Golf Club's Honorary Architect and Committee member from its earliest days in 1897 until his death in 1920.