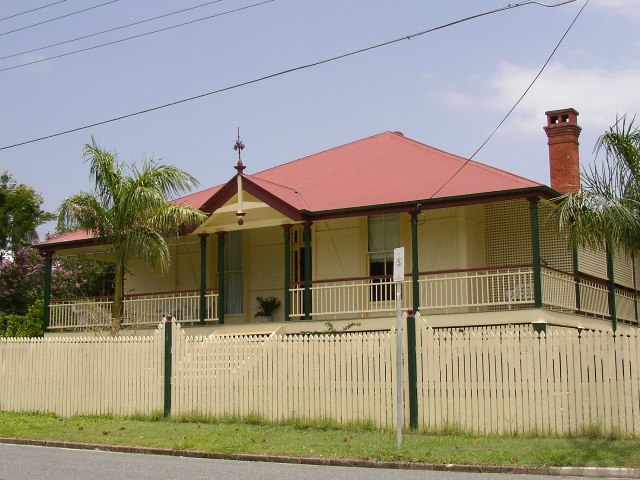 This fine, Federation era bungalow style house was constructed circa 1901 for Alexander Vaughan Dodwell and his family on the Killarney estate which was subdivided for sale from the 1860s. Yeronga was established as a desirable suburb in the late nineteenth century and by the early 1900s was characterised by large, fine homes such as this one. ‘Shottesbrooke’, as the house was named by the Dodwells, remained in their family for more than fifty years.

‘Shottesbrooke’ was built for Alexander Vaughan Dodwell, managing director of the Canada Cycle and Motor Company, in about 1901 on land previously owned by his father. Dodwell’s parents, George William and Josephine Mathilde, and some of their nine children subsequently occupied this family. GW Dodwell was a well respected resident of Yeronga who was active in community affairs in the area.

‘Shottesbrooke’ reflects the prestigious residential development of Yeronga at the turn of the century following the opening of the South Brisbane rail line to Corinda in 1884 and Yeronga Railway Station in 1885. As early as 1906 Yeronga was attracting fulsome praise as potentially ‘one of the best residential areas in Southern Queensland’ with ‘delightful residential nooks’ and houses.

The land on which the house was built was  part of the Killarney Estate  advertised in the Brisbane Courier as ‘the Village of Killarney’ in the 1860s. The Killarney Estate was bounded by Park Road and Yeronga Park along the eastern side, the railway line to the west, Killarney Street and portion 148 along the southern side and undivided Portion 150 at the northern end. The name ‘Killarney Estate’ was used in the 1880s building boom years to designate a single portion of land – about 3.6 hectares – which was offered for auction in subdivided lots.

In 1889 George William Dodwell, businessman, purchased two subdivisions from Patrick Crowe, a land and mining agent who owned a substantial amount of the Killarney Estate. A family birth notice in the
Brisbane Courier in September 1862 indicates that the Dodwell family had a previous house in Brisbane also called ‘Shottesbrooke’.

The land at Yeronga on which ‘Shottesbrooke’ was built was transferred from George Dodwell to Alexander Vaughan and Robert Hammont Dodwell in 1897. Alexander became sole owner in 1900 and took out bank mortgages in 1901 for £350 and further advances with the Commercial Bank of Australia and £1,000 with the Royal Bank of Queensland in 1905.

According to Post Office Directories, A V Dodwell was listed as living in Yeronga from 1903 to 1906 before being listed at New Farm.

He was the Managing Director of the Canada Cycle & Motor Company and was reputed to be one of the first residents in Yeronga to own a motor vehicle. A photograph of family members sitting in their Darracq parked outside ‘Shottesbrook’ was reproduced in the Brisbane Courier in 1906. As motor transport was only in its infancy at this time, few roads were surfaced. The Canada Cycle & Motor Company went into liquidation in the financial crisis of 1929.

The streets of the Killarney Estate around Yeronga Station are particularly narrow with distinctive Irish names – Dublin, Cork, Killarney – as well as having a number of substantial late nineteenth century houses with mature garden trees which support the identity of the area. Yeronga-Yeerongpilly became characterised by large homes of the well to do like ‘Shottesbrooke’.

This Federation era dwelling, located on the corner of Dublin and Cork Streets, has a sweeping roof incorporating verandahs on three sides. These verandahs feature the triple-railed dowel balustrading characteristic of the Federation era, which were in the original design.

The wrought-iron finial on the house’s entrance pediment and the flat-topped double chimney are also typical features of the era. The more recent picket fence is modern but built in the original style.

The house, occupying a prominent corner location, is a good example of its type.

as evidence of Yeronga's pattern of residential development in the late nineteenth/early twentieth century and its emergence as a desirable area for the professional middle class.

as a good example of Federation era bungalow residence.