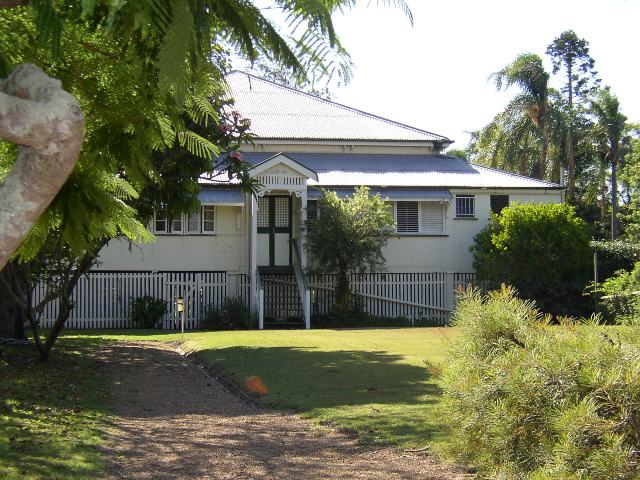 This 1880s residence is significant as one of few remaining properties in the area reflecting the first wave of prosperous suburban settlement of Yeronga following the opening up of the railway line in the mid 1880s. The house is also significant for its long association with Edward Denny Day, prominent Brisbane citizen and leading member of the Yeronga community.

‘Avoca’ reflects the prestigious residential development of late nineteenth century Yeronga with the subdivision of large rural estates. The catalyst was the opening of the South Brisbane rail line to Corinda in 1884 and Beenleigh in 1885. Yeronga Railway Station was opened in 1885. The house is illustrative of the nature of Brisbane’s first generation of suburban rail commuters – principally the affluent middle class.

Being situated in mid-block position between Avoca and Feez Streets, the house was situated before roads were developed around it. As a consequence, Avoca Street was named after the house. This is confirmed by early street maps of the area. According to Mrs Murphy, the current owner, it was originally called ‘Avoca’ by Frederick Stewart Brown.

The area was characterised by prestigious homes on large blocks like this residence. It was most likely built in the mid 1880s for Frederick Stewart Brown, a Queen Street stockbroker. Land titles show that he had taken out a ₤900 mortgage with the Queensland Investment and Land Mortgage Company in 1885 which was released in 1889. He then took out a mortgage in the same year with the Royal Bank of Queensland for ₤2000. An Estate Map dated circa 1888, identified the house along with the residences of C H Buzacott, E G Scriven and A McNab.

Brown subsequently went into liquidation in 1892, a victim of Queensland’s 1890s Depression. The property was acquired by the Royal Bank of Queensland, a major financial institution involved in the development of colonial Queensland. The bank owned the property for about 27 years from 1892 until it was sold to Harry Green in 1919.

During the Bank of Queensland’s ownership of the property it was mostly occupied by Edward Denny Day, the bank’s General Manager from about 1896 onwards. Day was a well known local identity, being first president of the Yeronga Bowling Club in 1912. In 1913 he received an illustrated plaque from the Residents and Property Owners of Yeronga District. The plaque has a picture of ‘Avoca’ and an illuminated address expressing appreciation for services rendered by him to the Yeronga community.

‘Avoca’ was featured in an article in Queensland Country Life in May 1902. It was described as one of the leading residences in the area and the home of well known general manager of the Royal Bank of Queensland. The article described ‘Avoca’ as a ‘high-set’ residence with a ‘great verandah’ and views of the D’Aguilar Range.

‘Avoca’ had a number of owners following Day’s occupancy. The property was transferred to Gregory Bernard Vincent Murphy and Mary Murphy in 1953. It was their family home from that time. Mary Murphy, the current owner, has occupied the house for over 50 years.

This late nineteenth century timber residence is situated in the middle of a large block with entrances to Avoca and Feez Streets.

It is a mid set dwelling with a pyramid roof. A 1949 Detail Plan of the house shows separate verandahs on all four sides with steps leading up to each verandah. A 1906 photo of the house shows wrap around verandahs. Although all the verandahs have been enclosed the house has maintained its basic integrity. According to Mary Murphy there were alterations to the house in the 1960s to accommodate their large family of seven children.

A carriageway leads up to the house from the Feez Street entrance. The house is situated in extensive grounds with mature trees making a significant contribution to both streetscapes.

as a late nineteenth century residence built during the first wave of suburban settlement in Yeronga after the opening of the railway.

as a fine example of a late nineteenth century dwelling with a simple double roof form, encircling verandahs and set in spacious grounds.

as the home of prominent local citizen Edward Denny Day for over 20 years.