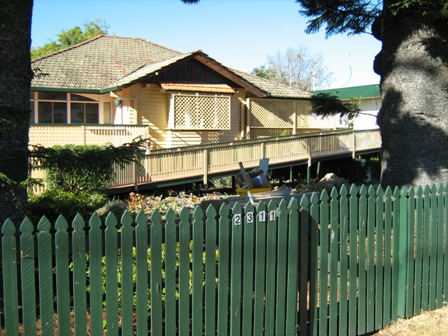 This substantial home was the residence of the former Wynnum and Greater Brisbane Mayor, John William Greene and his wife Phyllis. The Greenes were actively involved in the public life of the local community and professional organisations, and hold a place of significance Wynnum's and Brisbane's history.

‘Cooroona’ sits on land that was originally part of sixty-three and a half acres bought by Brisbane investors for ₤63 10s in 1862. The land was subdivided to an area of 20 acres 3 roods 29 perches in 1895. After passing through the hands of a number of owners the almost 21 acres was bought by John William Greene in 1913.

John William Greene and his father, also John Greene, were building contractors in Wynnum from the turn of the century. At this time Wynnum was an established and popular seaside township. The Greene family was to make important contributions to its development. Prior to this John Greene was a contractor in South Brisbane while two Misses Greene operated two private schools in the area.

The house, known as ‘Cooroona’ in 1952, was constructed in the middle of the land’s frontage to Wynnum Road soon after Greene purchased the property. Built entirely of hardwood, by experienced and respected carpenters (the Greenes) the house was described in 1930 as epitomizing a residence of “very charming and worthwhile people”.

In 1915 John William Greene enlisted and fought in World War One, returning after being wounded in 1918. He was elected to Wynnum Town Council in 1921 – the year that voting was extended to all male adults rather than just ratepayers. He was Mayor of Wynnum from 1921 until 1925 when Wynnum was amalgamated into the Greater Brisbane local authority. As Mayor, Greene served on the Finance, Works, Legislative and Health Committees that oversaw the modernisation of Wynnum with the introduction of electricity and the development of roads and bridges, picture theatres and bathing facilities.

Greene’s wife, Phyllis Mary Fairfax Greene, was a very popular Mayoress of Wynnum maintaining a very active public role while raising their three children. Mrs Greene was President of the Women’s Auxiliary of the RSSILA, and of the Wynnum branch of the Queensland Women’s Electoral League. She founded the local Country Women’s Association and was Secretary in 1930 when the Truth newspaper profiled the family and house, complimented her on maintaining a ‘dignified and comfortable home’ that welcomed visitors.

In 1930 the Grand Council of Progress Associations nominated John William Greene to be Lord Mayor of the recently formed Greater Brisbane. He was elected as alderman for Wynnum in 1931 as a non-party candidate and was elected as Lord Mayor by thirteen votes to seven in a secret ballot of aldermen. Greene served as Lord Mayor from 1931 to 1934 during the worst years of the ‘Great Depression’. During that time local councils administered relief work that kept hundreds of men in work on infrastructure projects such as the distinctive rock retaining walls and foreshore tidal swimming pool at Wynnum-Manly.

In 1933 Wynnum Reserve was renamed Greene Park in honour of the family's contribution to the development of Wynnum. John Greene's brother, Sam Greene represented the Wynnum Ward of the Brisbane City Council from 1937 to 1940. The Misses Greene founded Moreton Bay Girls High School in 1900 - which continues today as the prestigious Moreton Bay College.

John William Greene continued to live at 'Cooroona' transferring just over one and a half acres, containing No. 2333 to his sisters, Alice, Helah, Elsie and Hilda in 1946. At this time the two houses were the only houses in this part of Brisbane (now Wynnum) Road. He subdivided and sold land adjoining the houses throughout the 1950s. He died on 7 October 1959 just as Brisbane's centenary celebrations were at their peak.

In excess of fourteen and a half acres acres of the original property passed to his widow. In 1960 fourteen acres and nine perches were resumed for Wynnum North school. Two further subdivisions were sold and the house was converted to a Convalescent Home by R. and B. Logan in April 1961. It was sold with almost seventy perches to Wynnum Lands Pty Ltd in 1962. Further alterations and extensions to the Nursing Home were made during the 1960s and in 1976. Despite the addition of necessary ramps and facilities for its new role, the house is still recognised as the fine home that John William Greene constructed and lived in during his service to the local area and Brisbane during their formative years.

Built in Federation Bungalow style, this high-set house is constructed of a hardwood frame and clad externally with hardwood weatherboards with mitred corners. The hipped roof, prominent gable extensions and bay windows are covered with ‘Marseilles’ pattern terra-cotta tiles.

The originally open corner verandahs have been glazed behind the timber posts and curved arch frieze. The under-storey is enclosed with diagonal timber battens in opposing directions. While the original substantial grounds have been reduced at the sides and rear, the original form of the house presents to Wynnum Road behind a free-standing complex of ramps associated with its former Nursing Home use.

as the home built by and lived in by John William Greene and his wife, Phyllis Greene, Mayor and Mayoress of Wynnum, and Lord Mayor and Lady Mayoress of Brisbane.