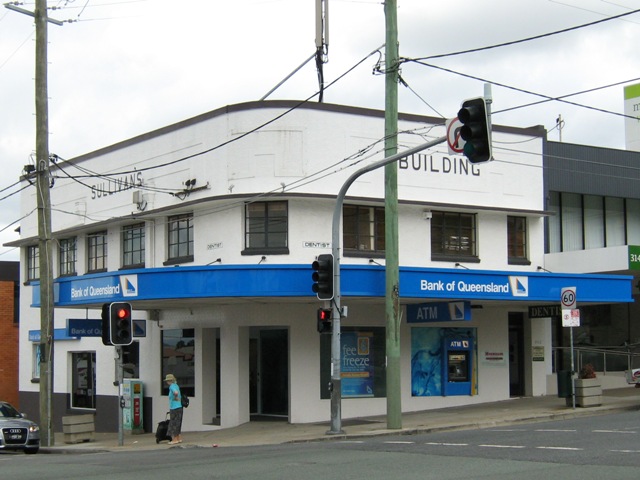 The Sullivan’s Building is situated on the prominent north-eastern corner of Cavendish and Old Cleveland Road and as a two storey, rendered masonry commercial building it has significant landmark qualities and as such is important to the Coorparoo area. Built in 1952 by James Sullivan, the Sullivan’s building is a rare example of early 1950s Functionalist architecture.

One of the important Coorparoo roads became Cavendish Road with its plethora of hilltops. This road developed into an elite address for a small number of wealthy local residents. By the 1890s, there were six such families living along Cavendish Road between Old Cleveland and Chatsworth Roads and in 1914 this number had increased to ten. They built their large houses on acreage sites, employed domestic staff and had such amenities as kitchen gardens, orchards, fowl houses and tennis courts.

The interwar period heralded a period both of residential expansion and developmental consolidation in Brisbane. With the extension of tramlines, suburbs such as Greenslopes, Camp Hill and Coorparoo experienced major increases in residential development throughout the 1920s and 1930s.

Immediately after the Second World War, Australia experienced a severe building material shortage. With this came tight governmental controls on building sizes and styles. These restrictions were not lifted until 1952. Significantly the Sullivan’s Building was constructed during this period and is important as an example of the post-war commercial development that occurred in the Coorparoo area.

Prior to 1952 James Anthony Sullivan owned a butchers shop at 334 Old Cleveland Road, Coorparoo. In 1952 Sullivan built the two storey rendered masonry building as an investment property. It was originally designed to accommodate a dental clinic on the first floor and retail premises on the ground floor.

Only eight years after the Sullivan’s Building was constructed the Coorparoo Myer building was opened on the opposite corner of Cavendish and Old Cleveland Road to Sullivan’s, thus establishing this part of Coorparoo as a retail and commercial centre.

The Sullivans Building is a two storey rendered masonry structure in the Inter-War Functionalist style. The building's roof is concealed by a parapet with simple geometric motifs and the words "Sullivan's Building" in raised block lettering. The rounded corner of the building is repeated in the horizontal cantelevered hood above the band of upper floor windows. The cantelevered footpath awning also has a round corner addressing the intersection. The upper floor casement windows appear to be original, and the original "dentist" signs are located above the footpath awning. The lower floor facade contains recent aluminium shopfront glazing.

as an early 1950s rendered masonry commercial building it reflects the way in which this part of Coorparoo developed as a retail and commercial centre in this period.