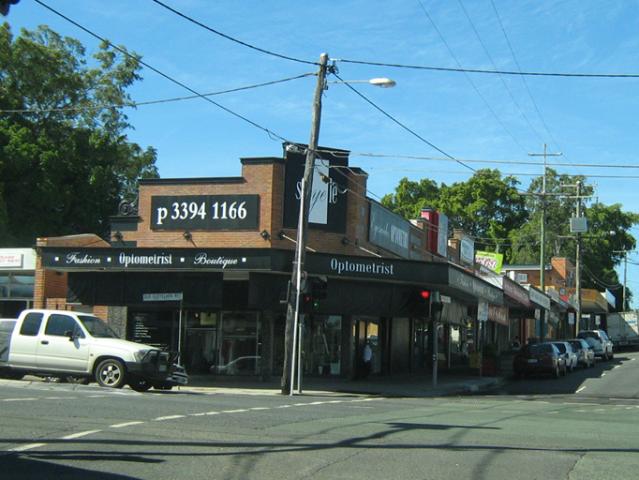 The set of three brick shops on the corner of Cavendish and Old Cleveland Roads was built in 1927. Originally a grocery store in the late nineteenth century, known as Faust’s Grocery, the corner site building was replaced by the brick building designed by E. P. Trewern. The interwar period in Coorparoo was one of increased development reflective of the population growth in the area, this set of shops demonstrates this.

One of the important Coorparoo roads became Cavendish Road with its plethora of hilltops. This road developed into an elite address for a small number of wealthy local residents. By the 1890s, there were six such families living along Cavendish Road between Old Cleveland and Chatsworth Roads and in 1914 this number had increased to ten. They built their large houses on acreage sites, employed domestic staff and had such amenities as kitchen gardens, orchards, fowl houses and tennis courts.

The interwar period heralded a period both of residential expansion and developmental consolidation in Brisbane. With the extension of tramlines, suburbs such as Greenslopes, Camp Hill and Coorparoo experienced major increases in residential development throughout the 1920s and 1930s.

The set of three brick shops situated at the corner of Cavendish and Old Cleveland Roads reflects the growing residential popularity of the suburb of Coorparoo in the interwar period and the increased need for retail facilities. In 1915 Peter Joseph Faust established a grocery store on the corner site and began a commercial tradition. In 1926 the property was sold to David Young. Aware of the commercial potential of the corner, Young’s plans were for the building of a set of shops to maximise his investment returns. In May 1927 plans were approved for the construction of a set of three brick shops on the corner. The building was designed by renowned Brisbane interwar architect, E. P. Trewern and built by W. R. Gaskell and Son.

Victorian trained Eric Percival Trewern established his Brisbane architectural practice in 1920 at an address in Queen Street, Brisbane. The practice continued until Trewern’s death in 1959.  The height of his design success occurred in the interwar period and he is renowned for his innovative designs incorporating the Spanish Mission and the Old English/Tudor revival style in residential and commercial architecture. Amongst his finest residential designs is the New Farm house “Santa Barbara” that is considered the best example of the Spanish Mission style in Brisbane. Trewern designed many commercial buildings in central Brisbane many of which no longer exist. One important extant building is the Inchcolm Professional Chambers on Wickham Terrace. Trewern was an active member of many prestigious architectural societies in the pursuit of improving professional architectural standards in Queensland.

In 1929 three businesses were listed at the address; on the very corner was the Coorparoo Butchery, then Tomlinson’s store, and Mrs. Crowley’s confectionary shop. The intact brick set of shops have continued their original retail use throughout the twentieth and into the twenty-first century and play an important contributing role in Coorparoo’s history.

as the set of three brick shops were built in 1927 in a period of suburban growth in the Coorparoo area and reflects the subsequent need for retail services.

this corner building with its decorative brick front façade, suspended awning and intact exterior tiling as this corner retail premises holds a dominant position within the main Coorparoo intersection of Old Cleveland and Cavendish Roads and makes a significant contribution to the streetscape.