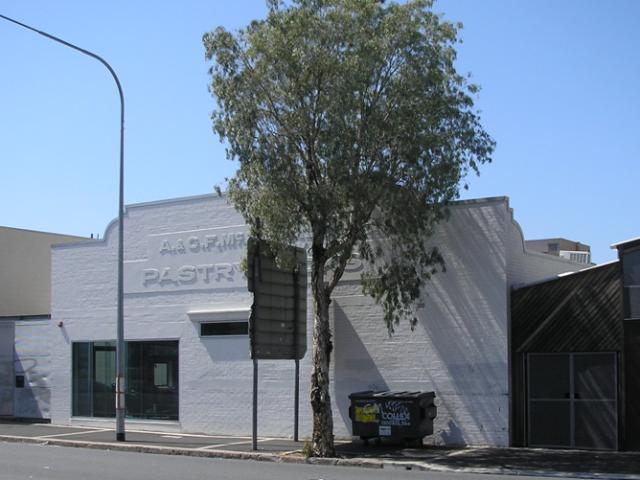 Built around 1930 for pastry cooks Aldolphus and George Frederick McDonald, this specialist bakery operated in Fortitude Valley until 1985. The former patisserie building retains the company name on its front facade as well as on an oven in its interior. It represents the changing face of the Valley in the interwar period when it became Brisbane’s second major retail precinct.

The land, on which this building was constructed, was first offered for sale in 1853. On 20 August 1853, land developer Robert Cribb purchased the four acres of land described as Suburban allotment 83 for £20 and 10 shillings. The property changed ownership many times over the next 70 years, being subdivided into smaller blocks until it comprised just 33.8 perches of land described as subdivision 8 of Suburban allotment 83.

This was the block that was leased by Aldolphus and George Frederick McDonald on 1 November 1929. At the time of the lease, these two members of the McDonald family had different occupations. George McDonald was a pastry cook residing at the corner of Logan Road and Toohey Street, Woolloongabba. Adolphus McDonald was a carter residing at Amelia Street, Buranda. But together they operated a confectioners and pastry cook business. In 1923, they had opened their first patisserie at a shop at 196 Adelaide Street, in the City. Later they switched their main patisserie to 196 Edward Street and by 1930 A & GF McDonald also operated branch shops at 330 Wickham Street, Fortitude Valley and at 35 Jane Street, New Farm.

A large specialist bakery was built on the site for the McDonald brothers. Their new Leichhardt Street premises was first listed in the 1930-31 edition of the Queensland Post Office Directories so it is thought that their building was constructed c1930. The interwar period saw the securing of Fortitude Valley’s status as Brisbane’s second most important shopping centre after Queen Street. “New industries continued to establish in the Valley due to its proximity to the city and to road, rail and river transport”.  As Fortitude Valley was well serviced by existing bakeries such as Keating’s Bread Factory in Warry Street and the new Automatic Bakeries, as well as by cake shops such as the Adams Cake Shop in Brunswick Street, the McDonald’s needed to offer something different. Being pastry cooks, they established a patisserie that could handle large cake and pie orders that were then baked on site in the large oven that was a component of their new building.

The McDonald’s patisserie developed into a successful Fortitude Valley business. By 1946, their brick building occupied almost the entire 33.8 perch block. Aldolphus and George McDonald finally purchased the 365 St Pauls Terrace site on 31 March 1952. They had expanded their business into a limited company A. & G.F. McDonald Pty. Ltd. when the company became the new registered owners of the patisserie site on 4 April 1956. The company mortgaged the property through the Commercial Banking Company (CBC Bank) of Sydney on the same day. On 24 February 1962, the company applied to the Brisbane City Council to have a cake bakery added to their premises. On 28 February 1968, Council approved an all-weather roof be built over the ramp on the patisserie’s loading dock. The cost of this renovation work was $1,000.  By 1980, the A & GF McDonald Company was a prominent member of the Valley Business Council (VBC).

After 55 years of operation, the A. & G.F. McDonald Pty. Ltd. patisserie closed in 1985 and 365 St Pauls Terrace was sold to Isles Pty Ltd on 27 August of that year. Wilgalodge Pty Ltd became trustees for the property on 1 June 1993. On 1 January 1993, the Brisbane architect and planning firm of Bligh & Voller Pty Ltd leased the former patisserie for three years ending on 31 December 1996. This architect firm had been established in 1926 and among its many projects were the Brisbane Domestic Air Terminal at Eagle Farm, the Queensland Police Headquarters in Roma Street, the City and work on the Expo’88 site at Southbank. When Bligh & Voller moved into their offices at 365 St Pauls Terrace, the firm retained some of the patisserie’s original features, such as the oven enclosure with its vaulted brick roof that ‘were maintained for memorabilia purposes.”

In November 1992, Bligh & Voller along with the firm of Sinclair Knight produced a strategic plan for Fortitude Valley in a report entitled Going with the Grain. The Brisbane City Council’s Urban Renewal Task Force had commissioned this report. In Volume 2 of the report, a Draft Structure Plan for Fortitude Valley was produced that including the mapping (Figure 3) of the suburb’s heritage values. As a result, the former A & GF McDonald patisserie was identified as a significant building space. Perhaps, the work on this strategic plan was the impetus for Bligh & Voller moving into 365 St Pauls Terrace in the following year.

This c1930 patisserie is representative of the many specialist businesses that relocated into the Valley during the interwar period, so making it Brisbane’s second major retail precinct.  The building still has its brick front façade including the business name of “A. & G.F. McDONALD PTY LTD PASTRY COOKS” that is located underneath the parapet. The patisserie’s oven is retained at the rear of the building’s interior. The roofline of the building remains the same as seen in the 1946 aerial photograph.

as a circa 1930 patisserie that has retained its original front façade signage and its interior oven.

as an original patisserie owned, built and run by the McDonalds.