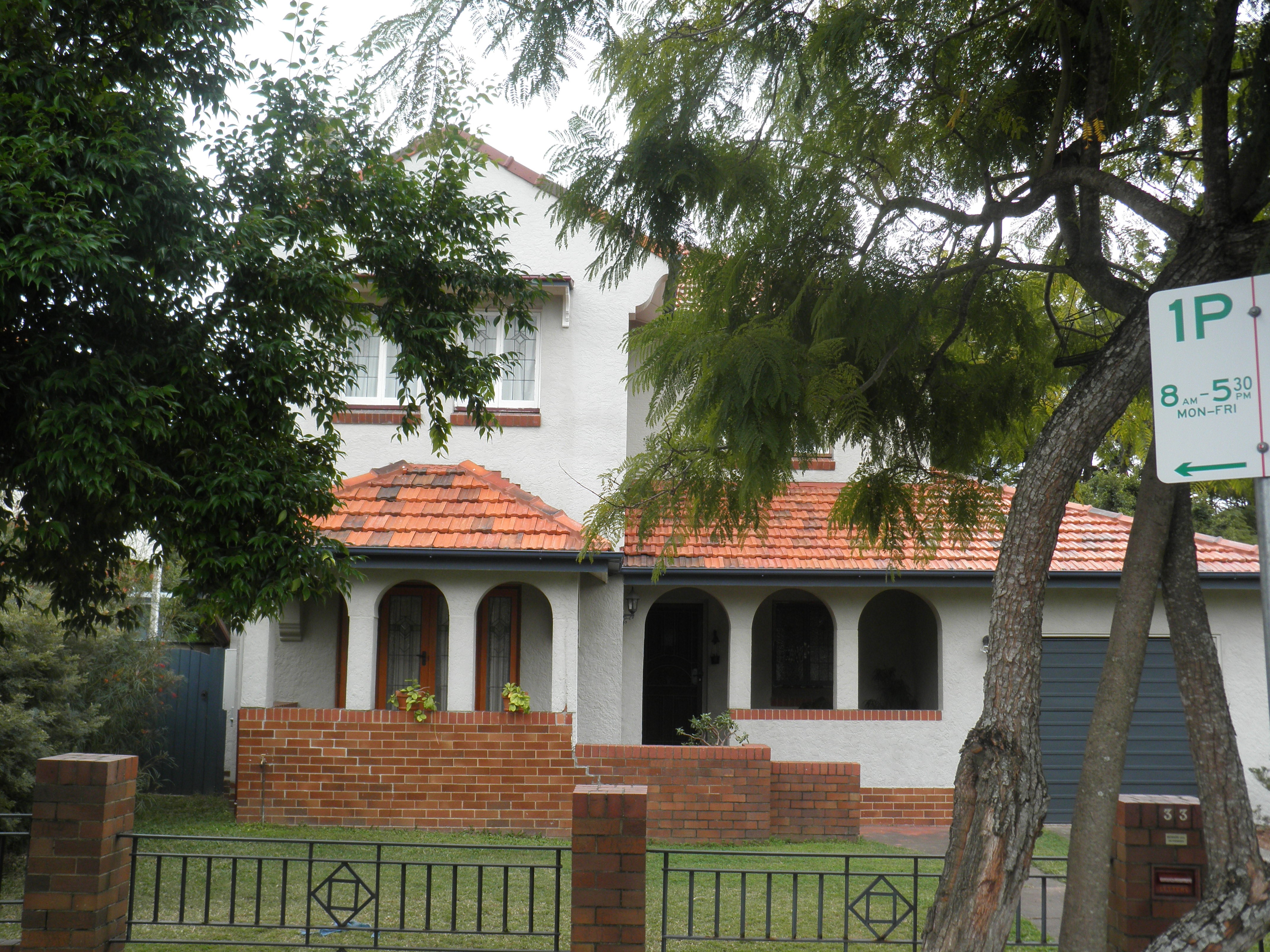 33 Eton Street was built in 1937 as one of a set of two masonry houses constructed adjacent to each other, the other being 1359 Sandgate Road. Both houses were designed by Brisbane architect C. E. Plant. The house is a two storey rendered masonry building designed with Spanish Mission features, popular in this period. The houses were owned and built by Mrs Florence Rose, the widow of Charles Rose, the proprietor of the Imperial Picture Theatre on Sandgate Road, Nundah. The house is important as one of a set of two architecturally designed interwar masonry houses built as an alternative to the predominant timber and tin homes constructed in the Nundah district in this period.

In 1935 Mrs Florence Rose purchased a block of land on the corner of Eton Street and Sandgate Road. In January 1937 Mrs Rose was listed in the Register of New Buildings as applying to build two brick houses on Sandgate Road and Eton Street, Nundah. The builder was recorded as being B. J. Bartlett. The houses were estimated to cost £2000 and £1900; it is unclear which was the most expensive.

The Rose family were prominent residents in Nundah. As proprietors of the Imperial Picture Theatre on Sandgate Road (demolished), Charles and Florence Rose played a large role in the Nundah entertainment scene. Charles died in 1930. His Obituary stated “Mr Rose…identified himself with the various bodies formed to promote the progress of the Nundah district”.

On 26 October 1937 The Courier Mail published an article entitled “Multiple Home Building that Avoids Charge of “Mass Production” Advantages Illustrated Well by Houses at Nundah”. The article considered the benefits of building two homes under one contract thus benefitting the owner “by using in each the same medium of building”. The article drew on the example of the two newly built houses by Mrs Rose at Nundah. Each house was individually designed to face their respective streets. The architect, Clifford. E. Plant, “advised the erection of two double-storeyed brick houses but insisted that if the monotony of repetition were to be avoided each house was to be distinctive in character”. The article went on to state:

the harmony of the two houses is contained in line and colour. Added to the modern character of both is the Spanish Mission touch about the verandahs and entrance porches. In each case the exterior brick walls are finished in texture plaster, and red tile roofs are uniform. Though the similarity between the two houses is strong, yet a subtle difference stimulates interest.

At the time the house was considered luxurious. Internally the design included ‘modern’ conveniences such as separate electricity systems, internal toilets, and continuous hot water. The two-storey home was unusual in Nundah when it was built. In this period the majority of housing stock in the district was the traditional timber home commonly known as the ‘Queenslander’. 33 Eton Street and 1359 Sandgate Road were striking exceptions. The Spanish Mission style was popularised in the interwar period in Australia by the influence of Hollywood on popular culture. Many of the Hollywood movie stars’ homes were designed in the style and so became sought after and fashionable in home design in Australia. As a proprietor of the Imperial Picture Theatre in Nundah, Mrs Rose’s motivations for the design of the two houses may have been influenced both by the movies and the desire to build fashionably in Nundah.

The house is a two storey rendered masonry building designed with Spanish Mission features. The house has a roughcast rendered finish with a terracotta tiled roof and a prominent two-storey gable presentation to the street.  Window fenestration generally consists of pairs of casement leadlight windows set in a reveal with exposed face brick sills. The upper storey includes a gabled front with symmetrical leadlight pairs of casement windows with a flat awning projection above. The lower storey includes a series of separately roofed window bays and small arcades.  The main elevation includes a small arcade projecting from the building’s two storey gable and an arcaded entry integrated with the main lower roof of the house and the garage.  The arcades include solid masonry balustrades with a face brick header course. Internal features include an original silky oak timber staircase and solid balustrade, brick fireplace and timber joinery with lead lighting inserts with an art deco design. The property includes a quarter height face brick fence of attached brick pillars with wrought iron infill panels and gates in an art deco design.

as one of a set of two intact and distinct architect designed two-storey masonry houses built in 1937 they are uncommon in the Nundah district.

as one of a set of two intact and distinct architect designed masonry homes that incorporate Spanish Mission features that were popular in the 1930s.

as one of a set of two two-storey masonry interwar architect designed houses that incorporate Spanish Mission features and are situated on a prominent corner site in Nundah.