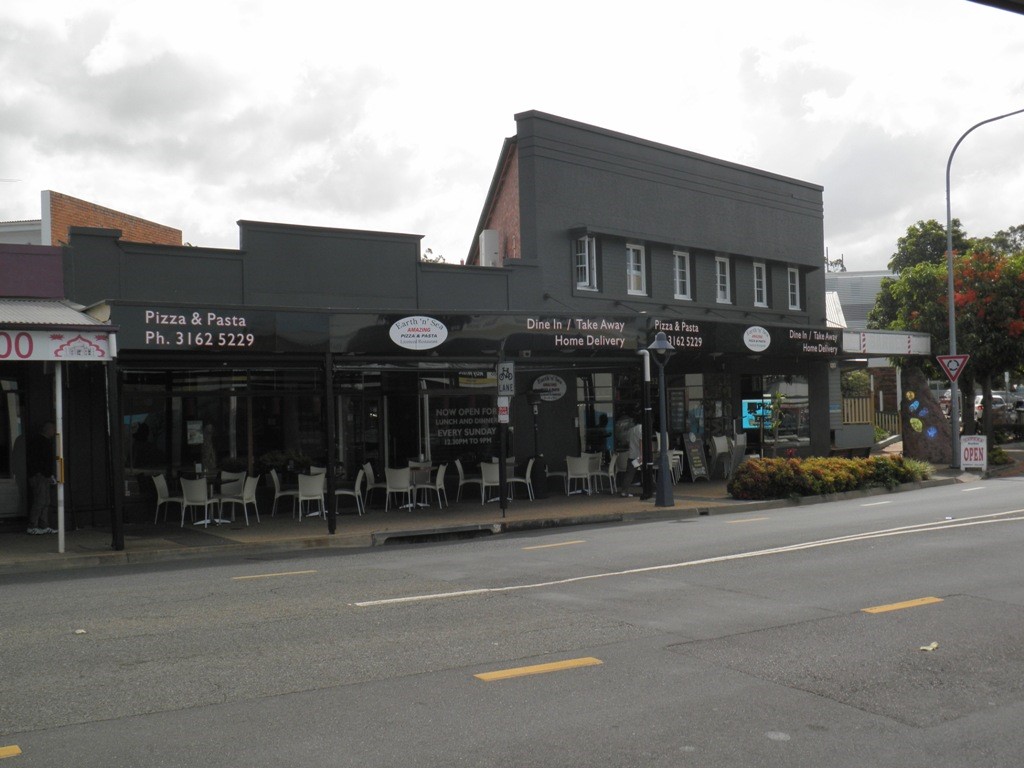 1252 Sandgate Road, Nundah was built in two stages. The first masonry shop was built in 1931-33 as the Nundah Fruit Supply store. The second, two storey brick building was built in 1940 and designed by successful Brisbane architectural firm, Plant and Voller. The second building was designed as two shops and two upstairs flats. The unusual triangular design of the two storey brick building at the entrance to the Nundah commercial area, with its high, symmetrical facade design is rare for this area. The intact shop fronts and original awnings on both buildings contribute to the historic commercial streetscape in this part of Sandgate Road, Nundah and reflect the growth of commercial activity in the area in the early twentieth century.

Nundah was originally known as ‘German Station’. As with many smaller settlements established on the outskirts of Brisbane, the coming of the railway transformed rural outposts into bustling centres and German Station was no exception. In 1882 a rail line was constructed to Sandgate, a popular sea-side holiday destination for many residents in Brisbane. A railway station was built at German Station. It was at this time that the name ‘German Station’ was changed to ‘Nundah’, believed to be an Aboriginal name for the string of waterholes scattered through this area. The railway provided superior access into Nundah and as a result the district began to boom.  The rural nature of Nundah changed as land was subdivided and sold for small lot housing.

Along Sandgate Road retail and commercial buildings were built that helped create a central village. In 1888 the Royal English Hotel, now known as the Royal Hotel, was built down the hill from the Prince of Wales Hotel. A telegraph office was established in 1882, an unofficial post-office in 1883 and the Nundah Baptist Church in 1889.

In 1920 Elizabeth and Timothy Patrick Confoy purchased a 26.6 perch block on Sandgate Road, Nundah. By 1930 a number of retail premises had been established on Sandgate Road between Boyd Road and Old Sandgate Road (now known as Bage Street). A draper, boot-maker, two confectioner and fruiterers, and a fish shop were conducting business on this small section of Sandgate Road. In October 1931 Mrs E. Confoy was recorded in the Register of New Buildings as applying for the construction of a shop on the 26.6 perch block. The cost of the work was estimated at £200. The Nundah Fruit Supply store was constructed from masonry with a tapered masonry parapet. By 1934 the Nundah Fruit Exchange was recorded in the Post Office Directories beside Molsey’s fish shop. In 1935 the fruit exchange was called the Nundah Fruit Supply store. Also that year Molsey’s fish shop next door changed hands and became Etherington’s butcher shop.

In May 1940 Elizabeth Confoy was once again recorded in the Register of New Buildings applying for the construction of a new set of shops and dwellings on Sandgate Road, Nundah. The builder was to be B. J. Bartlett and the estimated cost was £1179. In the same month the Architect and Builder’s Journal published a Tender Notice for the architectural firm Plant and Voller for two shops and dwellings. The accepted tender was from B. J. Bartlett.

Plant and Voller’s design of the 1940 building utilised the unusual triangular site at the entrance to the Sandgate Road commercial district in Nundah. Built directly beside the Nundah Fruit Supply store, the larger two storey brick building designed with its masonry symmetrical high front parapet contributed to the streetscape at the time. Directly across the road from 1252 Sandgate Road was the Imperial Picture Theatre (demolished) and several smaller auxiliary businesses such as cafes that utilised the passing trade generated by the picture theatre.

The decision to incorporate two flats on the first storey of the 1940 building demonstrates the increase in the construction of multi-unit dwellings in Brisbane in this period. As the Great Depression progressed from the late 1920s and into the 1930s a marked deficit of housing in Brisbane emerged.  This was the period in which the multi-unit dwelling began to emerge as an alternative to the traditional Brisbane house and yard. Prior to this in larger Australian cities such as Sydney and Melbourne this style of ‘modern’ living, in blocks of flats, had become a stylish alternative to living in the traditional house. Marketed mainly at single people and childless couples the earliest self-contained flats in Brisbane were generally conveniently situated close to trams, trains and shopping facilities in inner-city suburbs such as Spring Hill, New Farm and Fortitude Valley.

The set of flats were unusual for Nundah as the majority of its housing stock in this period were single detached houses. The shops and flats are important in representing the commercial history of Nundah and the way in which its centre has developed.

as a set of masonry shops with intact shop fronts built in 1931-33 and in 1940 that demonstrate the interwar commercial development of Nundah; as a two storey brick building constructed in 1940 that incorporates two upstairs flats it represents the shift to multi-unit living in Brisbane and is uncommon in Nundah.

as a set of masonry shops and two first floor flats that contribute to the commercial history of the Nundah area; as a set of flats built in 1940 that demonstrate the growing trend in Brisbane for multi-unit living in this period.

as a set of masonry shops at the entrance to the Nundah commercial centre that have visual prominence, they retain the original shop fronts and decorative parapets and are a remnant of the original commercial development on this part of Sandgate Road.