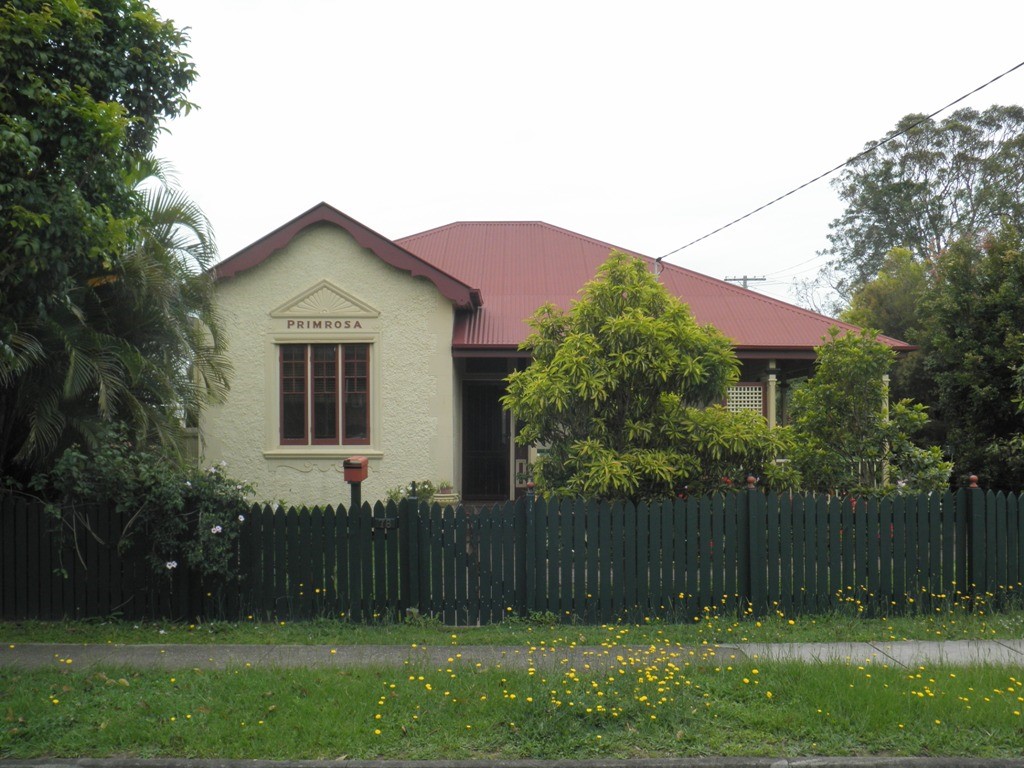 78 York Street was built in 1912 by Joseph Edwards, a local plasterer. The masonry house is an unusual example of a Queensland Workers’ Dwelling, traditionally constructed from timber. Named ‘Primrosa’ the low set rendered brick house retains many of its original features and makes a significant aesthetic contribution to this area of Nundah.

The suburb of Nundah was originally known as ‘German Station’. As with many smaller settlements established on the outskirts of Brisbane, the coming of the railway transformed rural outposts into bustling centres and German Station was no exception. In 1882 a rail line was constructed to Sandgate, a popular sea-side holiday destination for many residents in Brisbane. A railway station was built at German Station. It was at this time that the name ‘German Station’ was changed to ‘Nundah’, believed to be an Aboriginal name for the string of waterholes scattered through this area. The railway provided superior access into Nundah and as a result the district began to boom.  The rural nature of Nundah changed as land was subdivided and sold for small lot housing.

By the turn of the century the Nundah district had a population of 1675 people. Between these years many new houses were built in the area. An important initiative of the Queensland Government was the Queensland Workers’ Dwelling Act of 1909. This provided a means for working class families to acquire a low interest mortgage to construct their own house.  In 1910 Queensland’s first Workers’ Dwelling Scheme cottage was constructed in Surrey Street, Nundah. The house was a modest timber Queenslander, designed by the Workers’ Dwelling Scheme architectural office. It was a design that was to be used for many of the homes built under the scheme in this period. The scheme was so successful that by the late 1920s 23, 515 houses had been constructed under this plan in Queensland.

In 1911 Joseph Edwards purchased one rood and eight perches of land at Nundah. In 1912 he received a Workers’ Dwelling Board loan for £281. In this same year Edwards was first recorded at the York Street address. Edwards was a local plasterer in Nundah and the house he built reflected this. In a move away from the traditional timber Workers’ Dwelling Scheme homes Edwards constructed his from masonry with a rendered plaster finish.

In 1934 State Advances Act and Other Acts Relief Amendment Act was introduced that encouraged the construction of houses from brick to not only stimulate the economy by providing a wider scope of work from a timber house, but also to encourage the enhancement of Brisbane’s domestic architecture, by offering larger loans. Prior to this under the Workers’ Dwelling Act the construction of timber houses was the norm as the loans were lower and the cost of constructing a timber house was considerably less than a masonry one. Therefore the construction of the masonry house at 78 York Street was highly unusual under the circumstances.

Edwards owned the house until 1919 when it was sold to Albert and Jessie Belson and then in 1920 to Anne Maude Featonby, a school teacher.  Anne Featonby resided in the house until her death in 1961.  As an unusual example of a Workers’ Dwelling Scheme home built in the early years of the scheme, ‘Primrosa’ is important as a masonry house that makes an aesthetic contribution to the streetscape in York Street, Nundah.

The house is a simple low-set single storey building with a roughcast rendered exterior set on a smooth rendered base.  It has a short ridged pyramidal roof form with a projecting front gable and an L-shaped verandah.  The house contains two roughcast rendered chimneys with smooth rendered tops, located at the rear of the house.  The property also includes a rendered outhouse and a separate laundry block. The separate laundry includes a rusticated smooth rendered finish. Although a predominantly roughcast finish, the house features smooth expressed quoins and window surrounds with decorative motifs to the heads and sills.  The projecting front gable includes a decorative curved bargeboard and a central three-sash multi-paned casement window assembly with the name “Primrosa” displayed above the head.  The window embellishment is completed by a plastered decorative tympanum above. The entry door has a narrow panelled sidelight and the remaining joinery includes a combination of French doors and double hung windows.  The verandah includes tapering timber columns with simple capitals and a three-rail balustrade.

as an early and uncommon example of a highly decorative masonry house built in 1912 under the Queensland Government's Workers' Dwelling Scheme.