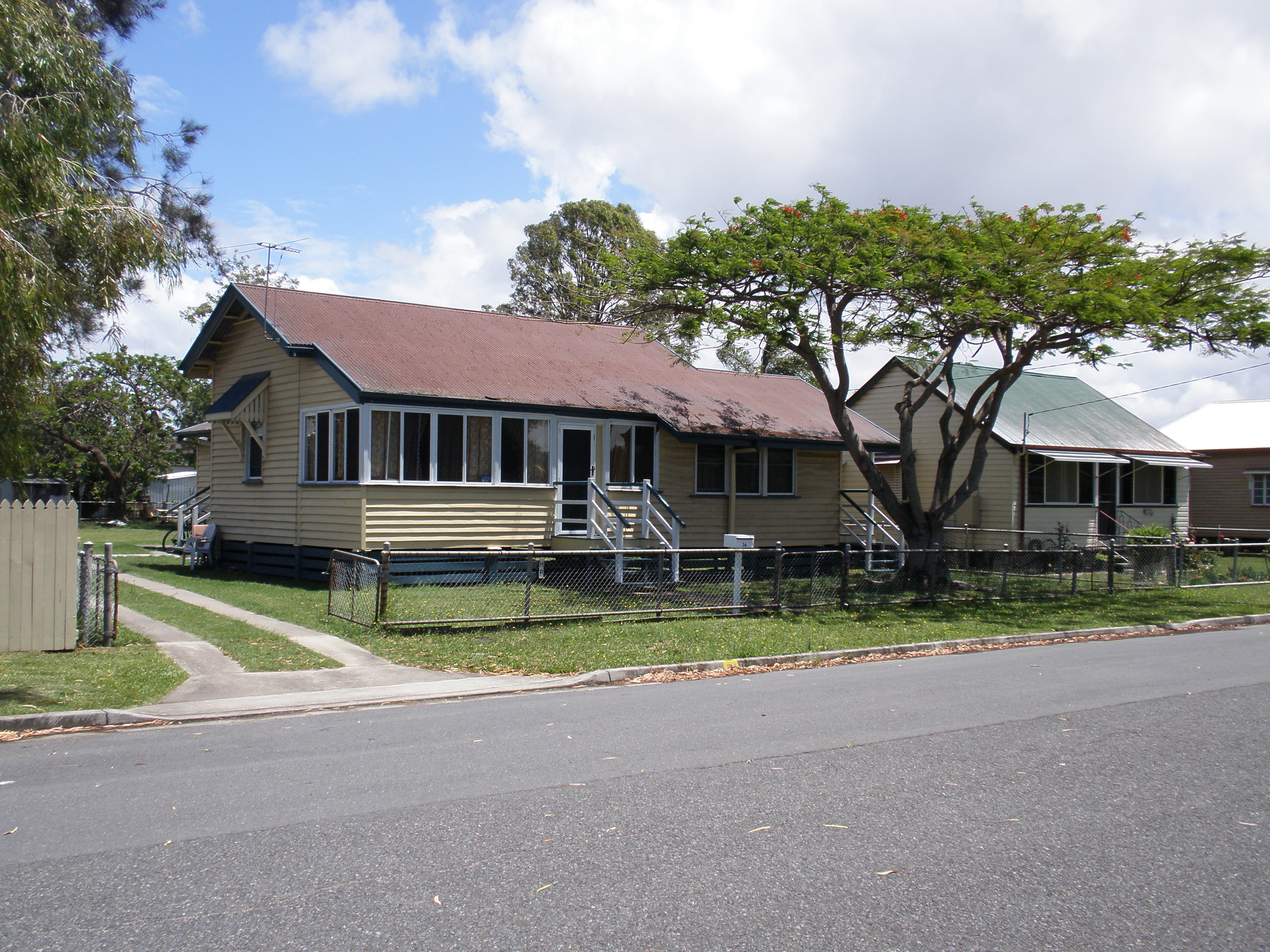 The Pinkenba Police Station was built in 1901 at a time of expansion in Pinkenba. A permanent police presence was increasingly needed as the industrial and wharf activity in the area escalated. The station was originally built with a separate cell block and stable which have since been removed. The station is a fine example of a small-scale early Federation period timber police station and residence (despite later alterations) that reflects Pinkenba’s history as a once important wharf village in Brisbane.

First known as Boggy Creek the Pinkenba area came about as a result of the expansion of the European settlers in the early nineteenth century.  From as early as the 1860s the Pinkenba area was progressively used for small farming. As a result of the Queensland Government’s immigration initiatives many European immigrants arrived in Queensland to begin new lives working on the land. Those moving out to the Pinkenba area were predominately of German origin and established small farming lots on which a variety of produce was grown including grapes, bananas, potatoes, tomatoes, cabbages and cauliflowers. By 1874 there were twenty-two families living in the Pinkenba area. As a reflection of the growth in population in this area the Pinkenba School was established in 1875.

The population of the area further increased in the late nineteenth and early twentieth century as industry was introduced and infrastructure improved. The Queensland Meat Export Company was the first large scale industry in the area. The abattoir was situated close to the river ensuring a distribution point for the export business. In the late nineteenth century and well into the twentieth the abattoir was the major employer in Pinkenba. The township grew as a direct result of the meat workers establishing homes in the area. The meat works was also responsible for the wharf area being established and subsequently expanded.  Importantly for the area the Government Powder Magazine was situated at Pinkenba (this was demolished in the 1930s).

In 1897 the Eagle Farm railway line was extended to Pinkenba due to the growing population and the demand from industry. The Pinkenba wharf was extended in 1898; it not only provided the meat works with a distribution point to load the meat onto export vessels, but also provided a general wharf for the shipping of items including coal and receiving overseas passengers arriving in Brisbane on steam ships. As a reflection of the increased traffic experienced at the Pinkenba wharf in this period the railway line was further extended in 1899 to run directly to the wharf, enabling
passenger trains to meet the overseas travellers directly as they disembarked from the ships. These infrastructure developments were coupled with the opening of the mouth of the Brisbane River through dredging, allowing a greater capacity for large ships to enter the Pinkenba reach of the river.

By the turn of the century Pinkenba consisted of a small community of workers’ cottages, a school, a hall, a post office, six shops, several guest houses and a hotel. The hotel was notoriously rough, being frequented by wharf workers, meat workers and sailors. This was reflected in the community’s demand for a police station to combat the problem of drunk and violent hotel patrons disrupting the Pinkenba community.

The Pinkenba Police Station was built in 1901. Prior to this date a police officer had been posted to the village, leasing a residence from Charles Smith, owner of several properties and small dwellings in Pinkenba. In a letter written in 1899 to the Under Secretary of the Home Department, the Commissioner of Police stated the need for the erection of a permanent station at Pinkenba and that an area had been reserved for this purpose.

The Pinkenba Police Station was built at a time when the Queensland Police Force, particularly in Brisbane, was expanding due to an increase in population density and the need for a greater police presence in many of the outer suburbs. In 1898 there had been one policeman for every 602 residents in Brisbane, a greater police presence was requested by the public.  In a letter to the Under Secretary of the Home Department dated 17 February 1899, the Police Commissioner wrote, “In consequence of the large extension of settlement in some of the suburbs I think it is expedient to make provision for the erection of permanent police buildings in… Pinkenba… There is no police station yet established…but one is required, and an area has been reserved for the purpose”. Despite this a station was not erected and in 1901 Police Commissioner Cahill had commented that in the north side of Brisbane there was a need for a greater police presence, this included the Pinkenba area.

In March 1901 Tenders were called by the Department of Public Works for the construction of a new police station, cell and stables for Pinkenba. The police station was built under the design specifications of the Government Architect, T. Pye. In this period Pinkenba was considered an outer suburb of Brisbane, a considerable distance to the inner-city and a relatively long journey away. It was deemed essential for a residence to be included in the design for the police officer posted to Pinkenba. By September 1901 a Memorandum was received by the Commissioner of Police from the Under Secretary and Government Architect advising that the new police station at Pinkenba had been completed and was ready to be occupied.

The police station and residence consisted of two bedrooms, a kitchen, sitting room, bathroom and front office. In 1958 the front office was extended. A separate cell block with one cell was constructed in the back yard and a separate stable was also built. The cell and stable no longer exist.  The station was de-commissioned in the 1960s and is now a privately owned residence.

The former police station is a small, timber framed building clad with weatherboards. The corrugated steel roof consists of two gables intersecting at 90 degrees. A small steeply pitched skillion extension (for an office) was added to the end of the front verandah in 1958. The front verandah has been enclosed with weatherboards and windows above balustrade height. Some of the original double-hung timber windows remain, as do the original timber slatted window hoods.

as an example of an early Federation period timber police station and residence that reflects the growth of the Pinkenba area in the late 1800s due to an increase in wharf and industrial activity and the resulting need for a police presence.

the Pinkenba Police Station and Residence has been connected with the people of Pinkenba and surrounding district since 1901 to the 1960s as a focus for law and order.