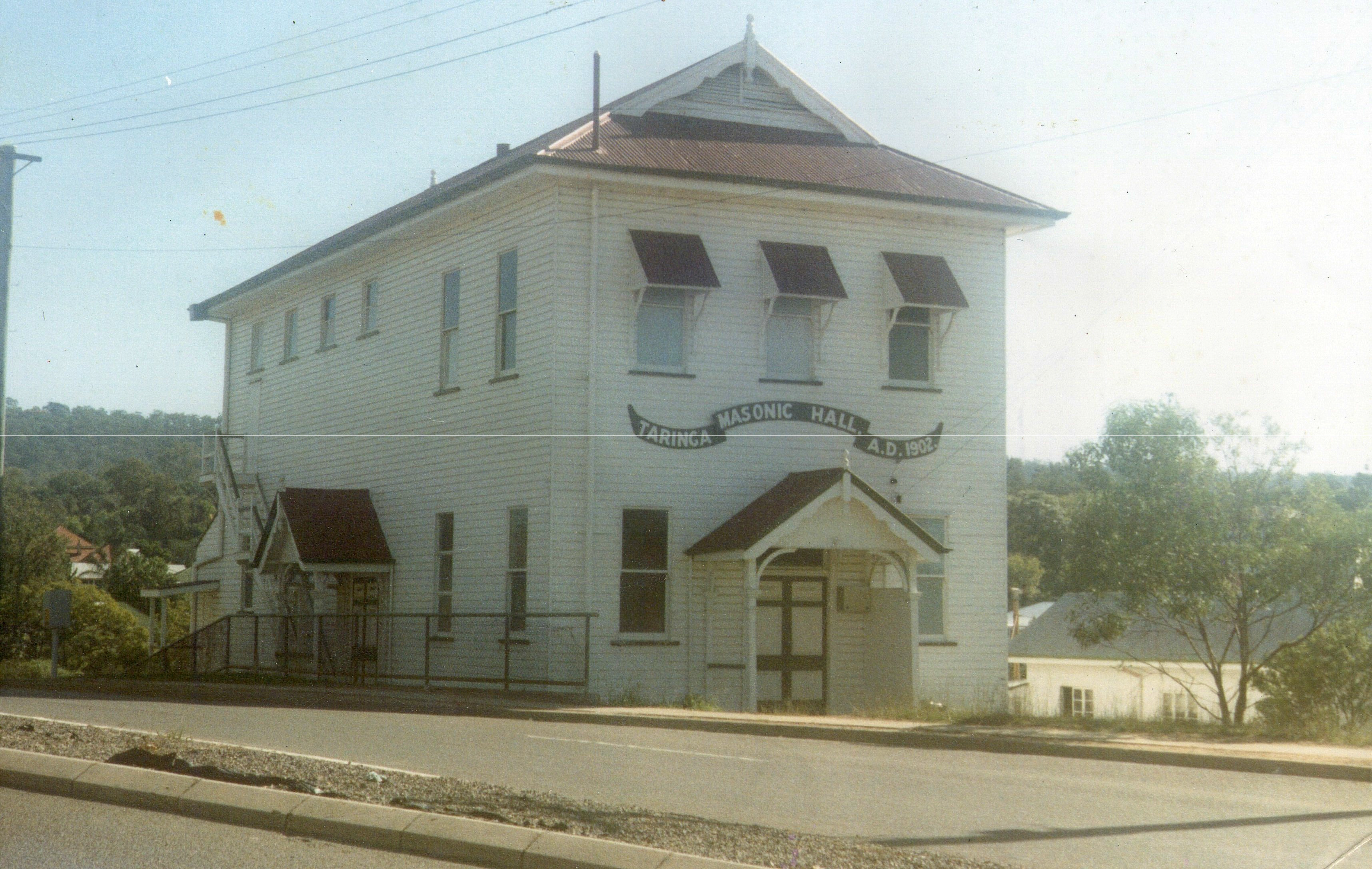 The Taringa Masonic Hall (former) was built in 1902 and is demonstrative of the way Taringa expanded in the Federation period. Built by and for the Taringa Masonic Lodge the substantial timber hall played a large role not only in the lives of the members of the lodge but also in the lives of the Taringa community as a centre for social activity. The hall is important as the only Federation period community building remaining in the Taringa village that reflects the early development of the area.

The area now known as Taringa was a large land holding owned by Mr. McGrath in the 1860s. Very little development occurred in this period. Closer settlement of the area was stimulated by the construction of the railway linking Brisbane and Ipswich. Work started in 1873 with the Railway Commissioner acquiring parts of Louis Stamp’s property at Indooroopilly. The Taringa Station was originally situated closer to the Indooroopilly Station and was opened in 1875. Early rail services to Ipswich included a ferry ride across the river until the first railway bridge was completed in 1876.

As a result of the coming of the railway increased development around Taringa Station occurred. New houses, shops and facilities appeared as the area was subdivided and settled. The efficient public transport into the city meant that many white-collar workers began to call Taringa home and throughout the district large, architect designed homes were built. On 8 October 1900 the Taringa State School was opened.

Prior to the construction of the Taringa Masonic Hall in 1902 the Taringa Lodge had held its meetings in several unsatisfactory venues, including a school room, a house at Indooroopilly and the Taringa Methodist Church. In a response to this the Taringa Masonic Lodge established a building committee; their first task was to find a suitable site on which to build the new hall. In 1900 a thirty-two perch block was purchased for £60 for the Masonic Hall on the corner of what was then Moggill Road and Frederick Street, Taringa. The trustees listed on the Title Deeds were Joseph Robert Loney, James Symington Lightbody, Ernest James Harding, David Guyatt, Isaac Hodgson and Henry Duffield Irwin.

Freemasonry came to Queensland from 1859, with the first lodge, ‘North Australian’, launched in the Freemasons’ Hotel in Albert Street. ‘St Andrews’, the first Scottish lodge in Queensland, was established five years later. Freemasonry was a fraternal society with religious and charitable aspects. The aims of freemasonry, as stated by the Right Worshipful Brother A.M. Hertzberg on the inauguration of the ‘Adolph Hertzberg’ Lodge, include the exercise of a wholesome influence, a practical expression of altruism and brotherly love, self-sacrifice and the acknowledgement of God, resulting in the banding together of ‘the best among men, whom nationality, creed or prejudice would otherwise keep apart.’ Hertzberg also pointed out the distinction from friendly societies of the time, which focused on providing medical services to members (who were generally working-class people). Freemasonry was
spread throughout Queensland by individuals, each promoting his own lodge. As a result, the primary loyalty of lodge members was to their founding lodge in England, Scotland or Ireland. Attempting to bring all lodges in Queensland into conformity with one another, the Queensland Grand Lodge was launched in 1904. It achieved some success, with all 25 Irish-based lodges in Queensland and fourteen of the Scottish lodges joining at inauguration. However, all English and the remaining Scottish lodges remained separate, retaining their loyalty to their founders.

Prior to the formation of the Queensland Grand Lodge the Taringa Masonic Lodge was a Scottish lodge. In 1902 the trustees secured a £550 mortgage to assist in the construction of the hall. This same year the hall was built by lodge member Edwin John Grigg for a total of £846/3/4. The large timber hall, situated at the apex of the hill was consecrated on 9 August 1902 by Rt.Wor. Brother Thomas Mylne, District Grand Master. This was followed by an official public opening on the 9 October, 1902. The hall was not only used for Masonic Lodge business; from its opening the hall played a large role in Taringa’s social life with dances, concerts and functions being held. This also assisted in reducing the debt that had accrued with the construction of the hall.

The hall remained the Taringa Masonic Lodge until the 1990s when it was sold and converted into commercial premises. The hall retains its prominent position on the apex of the hill from Frederick Street and is the last Federation period community building remaining in Taringa village.

as a Federation period timber Masonic Lodge Hall built at a time of increased settlement and development in Taringa, it demonstrates Taringa's Masonic membership growth and need for adequate meeting facilities.

the Taringa Masonic Hall (former) is a large timber hall constructed in 1902 and is rare as the only Federation period public building remaining in Taringa village.

as a fine example of a purpose built Federation period Masonic Hall.