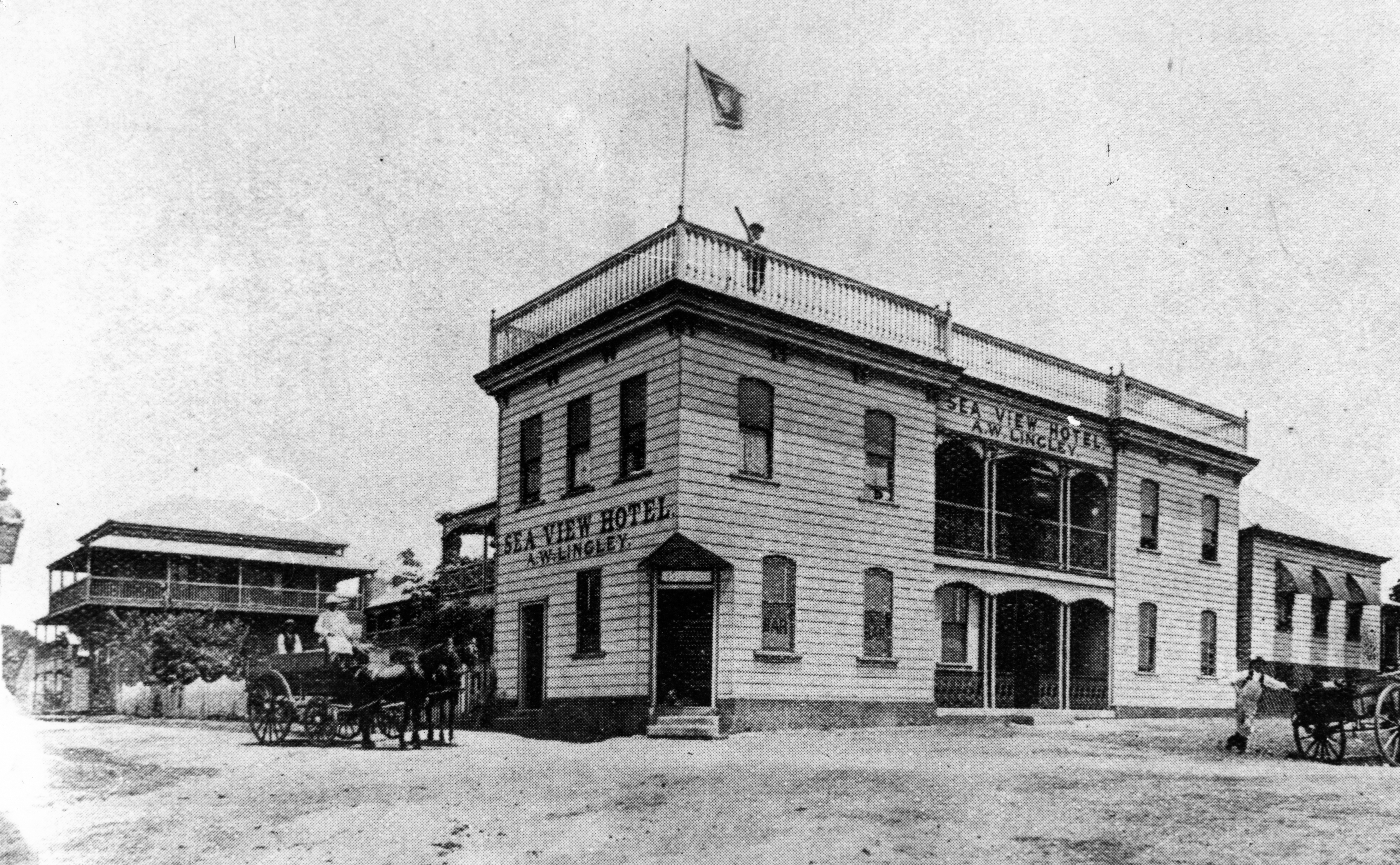 Designed by notable architect John Richard Hall, the Seaview Hotel was built in 1882. It was an extension to an existing structure and was perfectly positioned to capitalise on the coming of the railway which transformed Sandgate from a small village to Brisbane's premier seaside resort. Constructed in what was Sandgate's main street for almost 100 years, the Seaview was one of township's leading hotels in the late nineteenth and early twentieth centuries. From the 1930s as the Great Depression continued, and then wartime restrictions were introduced, the hotel's business declined. In the postwar years as motor car ownership became more common, Sandgate’s allure as a seaside destination waned in favour of the surf beaches of the Gold Coast. Nonetheless, the Seaview Hotel continued to operate, albeit in reduced circumstances, throughout the twentieth century. It was sold and ceased to operate as a hotel in December 2014.

The Village of Sandgate was officially surveyed in 1852 as Thomas Dowse and the McConnel brothers sought to establish a commercial port in Cabbage Tree Creek. The first land sales were held in November 1853 with much of the land sold to speculators. John Dunmore Lang praised its sandy or shingle beaches that were far superior to those to be found at Cleveland which was then vying with Brisbane as Moreton Bay’s principal port.1 However Brisbane retained its position and development at Sandgate languished due to its distance from the town and determined Aboriginal resistance to the occupation of their land.

Native Police were stationed at Sandgate from 1852 until 1862 to disperse the trouble-makers and the area slowly developed as a destination for seaside excursions. By 1868, Cobb and Co. operated a twice-weekly service. Six hotels were established, although only the Sandgate and Osborne Hotels survived the decade. A number of seaside residences and boarding or guest houses were also erected.1

This development was concentrated in the area now known as Shorncliffe. The high area overlooking the sea was favoured by well-to-do residents of Brisbane wishing to escape the summer heat. In 1865, it was the seaside resort of wealthy, fashionable and busy people from the metropolis of Brisbane 15 miles away.1 That year E. Sharpe opened a boarding house called the Seaview not far from John McConnel's residence (Morven now in St Patrick's College) where he offered first-class accommodation for families and wedding parties and magnificent views of the islands and shipping.1 By August however, the lease and furniture of the Seaview cottage, was for sale with interested principals to contact McAdam's Hotel.1

Seaview is likely to have been on the two acres of land on the corner of Kate Street (now Pier Ave) and Sunday Street (the section now called Park Pde) that in May 1854 was granted to William Robert Howe Weekes. Weekes sold almost 107 perches to Archibald Muir in 1866 who then sold the land to James Robert Dickson in 1876.

In the 1870s the permanent population increased and there were increasing calls for a rail link to Brisbane. Sandgate was declared a municipality in April 1880. Pier Avenue, then called Kate Street, was becoming the main street of the growing township. With the opening of the extension of the railway from Brisbane to Sandgate in 1882, the permanent population grew rapidly and settlement developed along the seashore flats. In addition holiday-makers and day-trippers turned the township into a bustling resort.1 Fine seaside residences such as Saltwood, Broadhurst and Meredian were built. The numbers of hotels increased.

In February 1880 39.2 perches of the land on the corner of Kate and Sunday Streets was transferred to Thomas Holmes. In 1881 Robert Todd, a mercantile clerk in Brisbane, applied for a provisional publican's license to sell liquor in an establishment belonging to Thomas Holmes. Todd proposed to build a house with “six sitting rooms and twenty-two bedrooms” excluding those required by his family, to operate as the Seaview Hotel. The license was granted to Todd to operate the Sea View Hotel in October 1881.1 Todd only held the license for a year and in November 1882 Holmes took out a mortgage on the property for £600stg. Within days he took out another mortgage for £3,000 stg to be repaid in 1887. Thomas Holmes was licensee of the Seaview Hotel from 1882-1890.1

In 1882 architect John Richard Hall designed and completed additions to the Seaview Hotel. John Richard Hall was the son of English architect Robert Hall and his wife Jane Ramsay. J.R. Hall was a practising architect in Newcastle, England before emigrating to Australia and marrying in Sydney in 1857. In December 1859 Hall was appointed foreman of works in the Queensland Colonial Architect’s Office but was dismissed six months later. He began a private practice and became a successful property surveyor and architect for the Queensland National Bank from 1872. During the 1870s Hall designed number of fine buildings including the warehouses Butlers Bros and Quinlan & Co. in Queen Street, fine residences such as Greylands, Indooroopilly and Langlands, Coorparoo, the Maryborough Grammar School as well as Queensland National Bank buildings.1

By 1881, Hall had divorced his second wife and remarried, and “moved to a new home in Sandgate, Villa Marina, and he took part in extensive building activity in the area”.1 Hall designed his own home Villa Marina, and Howrah for Bishop Quin at Sandgate, as well as additions to the Osbourne and Seaview Hotels in 1881-2. John Richard Hall died in 1883 after taking his eldest son, Francis Richard Hall into partnership.

Throughout the late nineteenth century Sandgate flourished as a readily accessible seaside resort for Brisbane. Bathing boxes dotted the foreshores. Fine residences, boarding houses and schools were built, as well as churches for the major denominations including Baptist, Anglican, Catholic and Methodist faiths. Moora Park had a bandstand that was included in advertisements for the Seaview as an extra inducement to stay there. From 1887 racegoers met at the Seaview to settle their winnings after a day at the Sandgate Racecourse and by 1890 Holmes had succeeded in getting free access to the nearby Sandgate Pier for hotel guests. The pier at that time boasted shops and performances for visitors promenading on the weekends.

In the early 1890s Brisbane suffered an economic depression and in 1893 the Supreme Court ordered that Thomas Holmes, the Union Bank and Queensland Brewery were foreclosed and debarred from the hotel property.1 Thomas Murray Prior and Anthony Darvall obtained title to the property in 1902 and it was leased to Alice and William Lingley who had held the licence from 1895. A succession of licensees and owners kept the hotel operating throughout the 1890s.

On Sandgate’s twenty-first birthday as a borough in 1901, the Sea View Hotel contained 100 rooms, bath, reading and billiard rooms as well as five “very comfortable furnished cottages” [visible in the 1901 cover image] which were “let to families at hotel tariff”.1 The hotel continued to operate successfully in the early decades of the twentieth century.

In 1910 however a fire broke out in the nearby Council chambers and it burnt down. As the town developed along the foreshore and in the regions surrounding the Brighton Hotel which opened in 1882, a more central location was chosen for the new Sandgate Town Hall. It was designed by Thomas Ramsay Hall, son of J.R. Hall and his second wife, and opened in 1912. A new train station was constructed in Sandgate Central and opened about this time also.

Throughout the 1920s and 30s the seaside town became a popular venue for school and social club picnics. Many organisations organised excursions to the Sandgate seaside for annual picnics. For example, the Ipswich Branch of the Australian Meat Industry organised their picnic in December 1921. Committee members and railway officials had their lunch at the Seaview Hotel.1 Throughout the 1930s New Year’s Eve parties for adults and children were held at the Seaview Hotel, as well as parties for the Sandgate Country Women’s Association.

However, the outbreak of World War Two in 1939 was blamed for ruining the business of Charles Quinlan’s £22,000 Seaview Hotel. “The war, the abolition of 11 o’clock closing and the entry of many liquor drinkers into the military” as well as petrol rationing were blamed for Quinlan’s inability to meet his quarterly payments at his bankruptcy hearing.1 Although given leave to raise further limited funds by mortgage, Quinlan sold the hotel in 1946 for £16,000. By 1950, the hotel was again on the market and passed in at auction before being sold for an undisclosed amount in 1951.1

The hotel changed hands fairly regularly throughout the 1950s and 1960s with Castlemaine Perkins gaining title in 1972 after taking a caveat over the property early in the year. The declining fortunes of the hotel reflected Sandgate’s declining status as a seaside resort as the ownership of private vehicles and the lifting of petrol rationing saw the surf beaches of the Gold Coast become a more popular destination.

In the second half of the twentieth century the hotel was unsympathetically altered and repaired,

and may have closed for periods of time. A new owner in the twenty-first century restored the building to more closely resemble its original form and capitalise on the suburbs resurgence following some upgrading of community facilities.

The Seaview Hotel is a two storey timber hotel facing Pier Avenue which, when the hotel was built, was the main street of Sandgate. The building has had numerous alterations over the years but has been restored to resemble its original presentation.

as a hotel planned in 1881 and built in anticipation of the boom created by completion of the rail link between Brisbane and Sandgate, it demonstrates the optimism and thriving economy of the town in the late nineteenth and early twentieth centuries.

as the only nineteenth century commercial remnant of the once main street of Sandgate which boasted the Municipal Chambers from 1882 to 1910, and shops, hotels, a picture theatre and post office until the second half of the twentieth century. 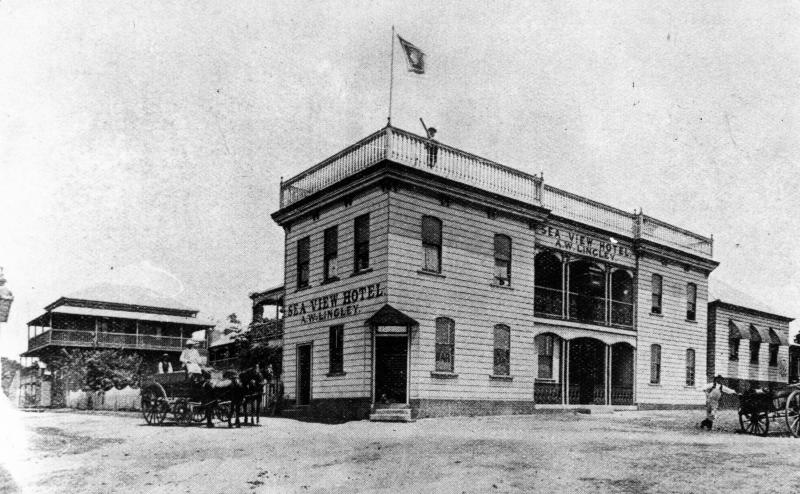 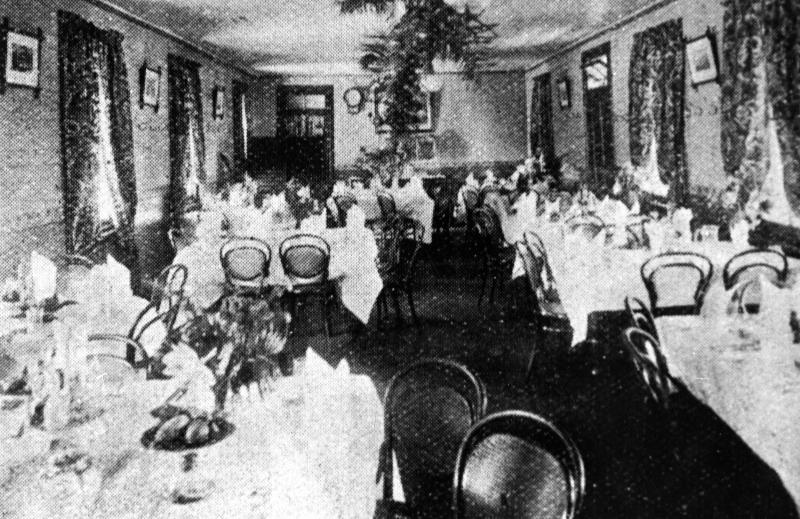 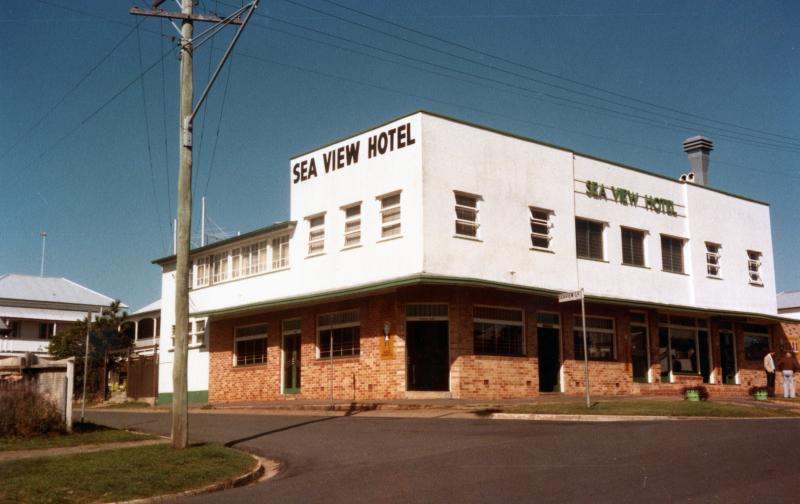