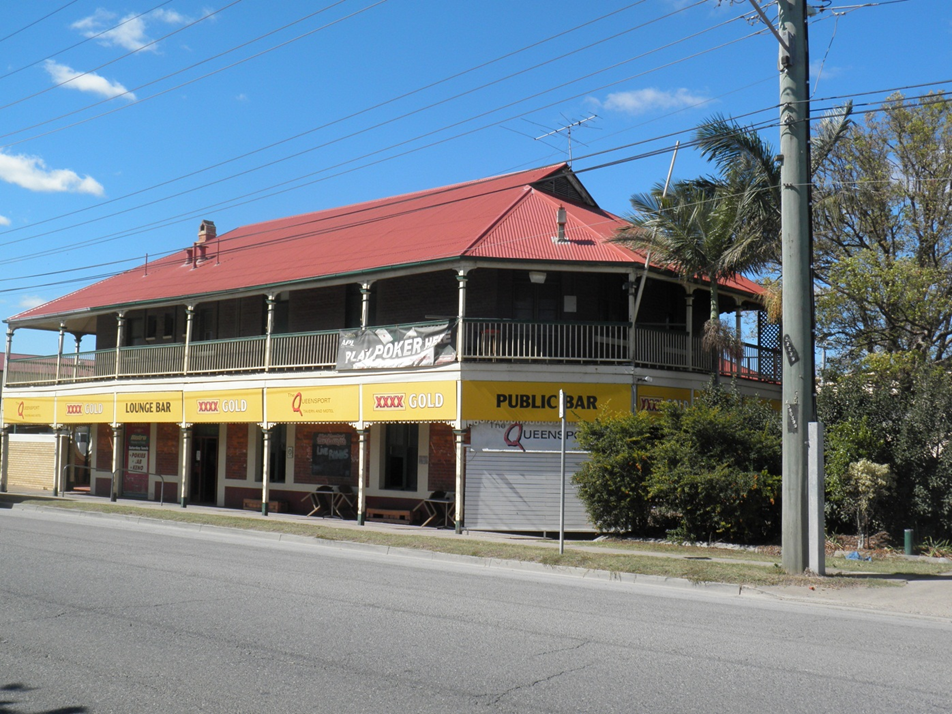 The Queensport Hotel was constructed between 1890 and 1891 for publican, Martin Kavanagh. The brick and timber hotel was designed by respected Brisbane architect, Charles McLay and was one of his first private commissions. When first built, the hotel was a short distance from the Queensport Aquarium and the Queensport meat works and this ensured steady patronage. The hotel has been in continuous use as a hotel since its construction. As the district evolved from a predominately farming area to an industrial one, it has provided hospitality to locals and workers for over a century.

Before European settlement the area was home to the Gnaloongpin people who benefited from the plentiful fishing and abundant fauna and flora. When European free settlement began in Moreton Bay in the 1840s and into the 1850s, much of the government owned land was sold to private landholders. With the land’s subsequent clearing, the Aboriginal people were increasingly displaced and forced to move further from their traditional lands.

Farms were established throughout the area with fruit and vegetables transported by boat up the river into town. Improved roads into the area and the construction of a bridge in 1861-62 over Doughboy Creek (now Bulimba Creek) opened the area for further settlement and the small villages of Doughboy Creek (renamed Hemmant in the 1870s) and Lytton developed.

A school had been established earlier in 1864 and closer to the river, the Queensport meatworks was established in the 1880s. By the 1890s the village of Hemmant had expanded and was home to twenty-six farmers, three dairymen, butcher, baker, grocer, postmaster, policeman, sail-maker, wool-classer, vigneron and an apiarist. The railway line to Cleveland was extended through Hemmant in 1889 and by 1914 Hemmant had a railway station.

One of Brisbane’s first amusement parks was built beside the river at Hemmant in 1889. The Queensport Aquarium was located at the end of the road that today is Aquarium Avenue.  Day-trippers boarded steam boats in the city that would take them to the Aquarium. Within the park were six large glass fish-tanks, penguin enclosure, performing seals, tame pelicans, a dance hall, switch-back railway (precursor to modern-day roller-coasters), merry-go-round and sporting facilities. A zoo with monkeys, tigers, snakes, cheetahs and panthers was also an attraction. Although the 1893 flood impacted heavily on the Aquarium, its demise was due mainly to poor financial management and by 1897 it had closed.

In 1867 Martin Kavanagh purchased approximately seven acres of land at Hemmant and was first listed as a farmer at Doughboy Creek (Hemmant) in the 1874 Post Office Directories. By 1887 Kavanagh had changed occupations and had become the publican at the Lytton Hotel that had been established in 1878. At this time, the small township of Lytton near the mouth of the Brisbane River had the hotel, a school, water-police station and was home to five farmers, four reformatory employees, two boatmen, four policemen, a post and telegraph master, a teacher and a Government Health Officer. Kavanagh continued running the hotel at Lytton until he decided to establish a hotel at Hemmant.

The site of the hotel was on land already owned by Kavanagh and was in close proximity to the Queensport Aquarium as well as to the Queensport meatworks situated beside the river, ensuring a steady clientele for the hotel. In 1891 Kavanagh was granted a hotel licence to establish the new hotel in Hemmant. It is likely that construction on the new brick and timber hotel had begun in 1890 as reference to Kavanagh’s “new hotel at Hemmant” (The Brisbane Courier, 5 May 1891; The Brisbane Courier, 8 July 1891) appeared in the newspapers in mid-1891, suggesting that the hotel was complete and opened by this time. Kavanagh was first listed in the Post Office Directories at the Queensport Hotel in 1893. As Martin Kavanagh opened the hotel at Hemmant, the licence for the Lytton Hotel was transferred to one of his daughters, Bridget Kavanagh.

The new Queensport Hotel was designed by respected Brisbane architect, Charles McLay. In 1889, after working as a draftsman for the Colonial Architect’s Office in Brisbane from 1885, he was appointed Chief Draftsman. His most acclaimed designs were for the Brisbane Customs House in Queen Street, the Fortitude Valley Post Office in Ann Street and the Nazareth Church in Woolloongabba. In 1890 he left the government post and began working in private practice. The Queensport Hotel was one of his first commissions.

In 1898 Martin Kavanagh died and passed the hotel and its license on to another of his daughters, Mary Ann Kavanagh, who, at the time was recorded as being a spinster. In the same year, however, Mary Ann married Martin McGladrigan. The Kavanagh family continued to run the hotel until 1911, when a lease was given to John Henry Campbell and this began a series of leases for the hotel.

Many of Brisbane’s small villages established along the mouth of the river in the nineteenth century, including Cribb Island, Myrtletown and Lytton, have disappeared with industrial and infrastructure expansion. Pinkenba (situated on the opposite side of the river) and Hemmant are the last remaining villages located near the river’s mouth.  In Brisbane, the Queensport Hotel is the last nineteenth-century hotel remaining from these once bustling port villages.

Importantly, the Queensport Hotel has remained in continuous use as a hotel throughout its history. Today, it remains the only hotel in the Hemmant/Lindum/ Lytton area and continues to provide hospitality to industry workers and the local community.

The Queensport Hotel is a two-storey masonry hotel with a hipped roof clad with corrugated metal sheeting. A wide timber verandah wraps both levels and retains original detailing including a deep valance. The hotel retains original doors, windows and chimneys and is highly intact.

as evidence of the late nineteenth-century development of the Hemmant area.

as Brisbane's last remaining nineteenth-century hotel situated in a port village close to the mouth of the Brisbane River.

as a relatively intact nineteenth-century brick hotel in Brisbane.

as a hotel that has provided hospitality to locals, workers and visitors to the Hemmant area since the nineteenth century.