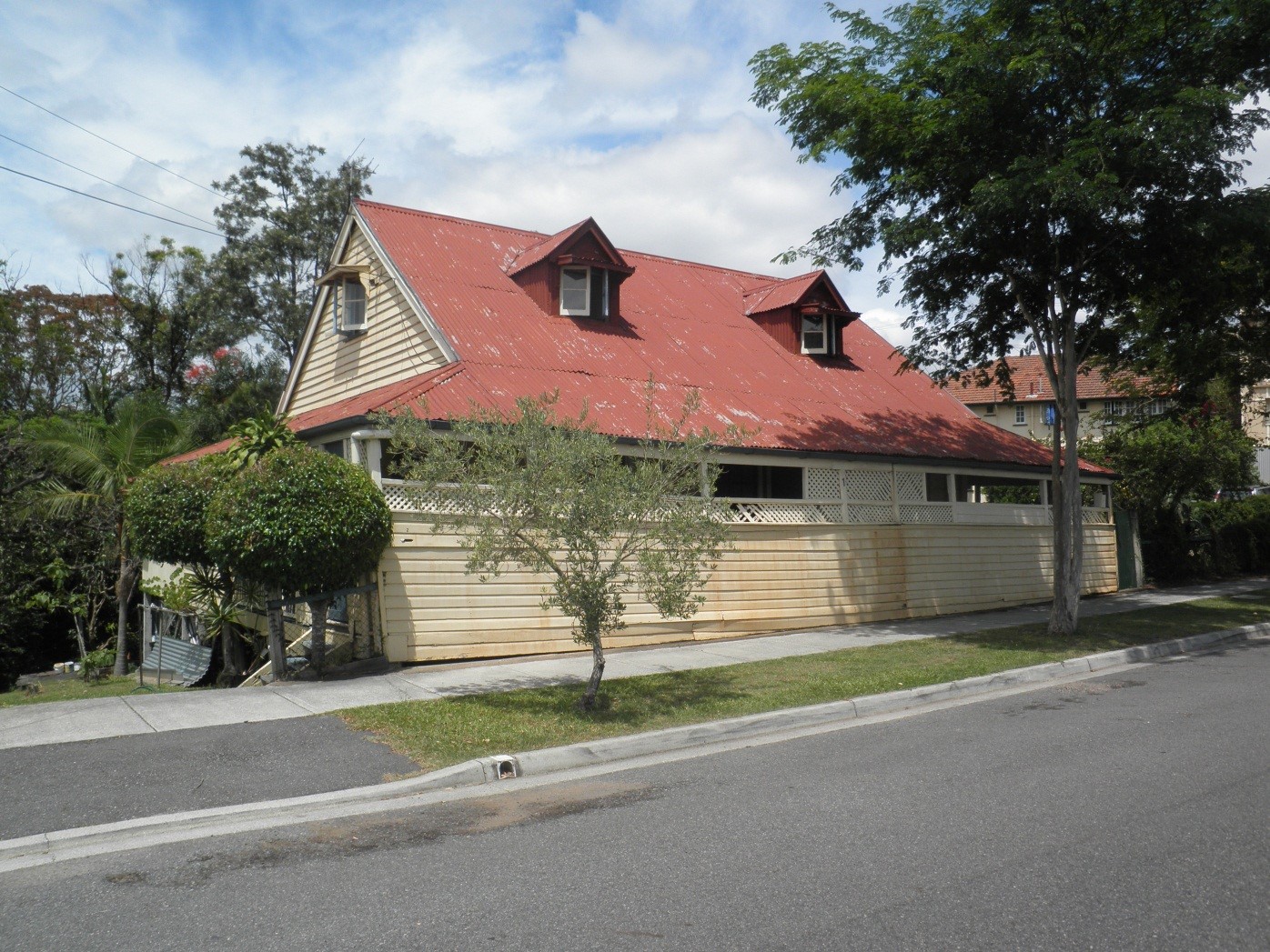 This residence was built circa 1887 as a rental property for controversial journalist, politician and property investor Ebenezer Thorne. The house was constructed during a time of increased residential settlement in the desirable suburb of Highgate Hill. Thorne’s house, initially known as ‘Prospect Place’, featured six bedrooms, servant’s rooms, stables and verandahs, the last taking advantage of its elevated position on Gertrude Street. The house was tenanted by a variety of middle-class residents during the late nineteenth and early twentieth centuries. Sold by trustees in 1911, it was obtained by Thorne’s second wife Sarah in 1920. Sarah named the house ‘Carina’ for her stepdaughter, Kate Carina, for whom the suburb of Carina is also believed to be named. Subsequent owners converted the property to a tenement dwelling, though it has since reverted to a single dwelling. It is currently owned by multiple proprietors, one of whom has held an interest in the property since 1974.

Highgate Hill, traditional land of the Jagera people, saw very sparse residential settlement by Europeans. Estates were granted to a small number of landowners in the 1860s, when the slopes of Highgate Hill were still ‘thickly covered by timber’1. By the 1880s, however, large estates were subdivided and sold off for closer residential development to satisfy the population and housing boom of the period. The suburb’s elevation and proximity to the centres of South Brisbane and Brisbane made it a highly desirable residential area. Houses for the wealthy were built along the high points of the suburb, taking advantage of the breezes and views they afforded. Water shortages caused by the gravity-fed water reticulation system were solved in September 1889 by a reservoir, built on the heights of Gladstone Road.

In 1885 three subdivisions a large estate in Highgate Hill were sold to Ebenezer Thorne, a politician, journalist (who established a large number of newspapers including the Farmer and Planter, Patriot and Tribune) and early European settler in the Carina area. The suburb of Carina was named for his residence which itself was named for his daughter Kate Carina Thorne.

Thorne was a controversial figure in Brisbane. He had arrived in Queensland in the mid-1860s, but returned to England in the 1870s. He returned to Queensland in 1876 with his new wife Kate. He served on local councils including the South Brisbane Shire Council, and participated in the South Brisbane Progress Association in the 1880s. His views on what local government should and could achieve changed over the course of his political career, but in the 1890s he proposed the centralisation of Brisbane’s local governments, an amalgamation achieved thirty years later. While serving on the Bulimba Shire Council he was accused of mishandling money, and he faced courts over accusations of cattle theft and libel on multiple occasions.

Thorne’s interests in Highgate Hill were motivated more by business than the area’s renowned aesthetic appeal. Thorne stood for election in the South Brisbane Council in the 1880s and was co-proprietor of the Southern World newspaper, which was based in Stanley Street.

Thorne built a house on his newly acquired Highgate Hill land. Although the exact construction date is unclear, it was not standing before 1886. Despite purchasing the land in 1885, Thorne offered all his extensive land holdings for sale a year later ‘in consequence of his contemplated departure for England’. This included ‘allotments 15 and 16, Beaumont Estate, having 71 feet to Gertrude Street’1, but no house. While he sold Carina and some of his other land holdings, the Highgate Hill property was not sold. Thorne himself either remained in Queensland, or returned to the colony from England. The house was probably constructed in the following year, 1887. It featured six rooms, including two attic rooms, bathroom, kitchen and two brick chimneys. Verandahs encircled the house, taking advantage of the panoramic views then available from the ridge line of Gertrude Street.

Thorne owned multiple properties in and around Brisbane, and appears that the Gertrude Street residence was built as a rental property. Brisbane was experiencing significant population growth spurred on by an economic and building boom. This growth likely led Thorne to build the Gertrude Street house. Occupants were listed on the site in Post Office Directories from 1887.

A bank crash in the 1890s saw the house left vacant, and Thorne faced financial difficulties. He mortgaged the property in March 1891 for £1,227, an immense sum. (Later that year one of Thorne’s Gertrude St properties was valued at £168.) In July 1891 title passed to Thorne’s wife Kate. This may have been done as an attempt to maintain ownership of the house, as Thorne’s estate was liquidated in December 1891. Trustees were nominated soon after. Kate died in 1892, and Ebenezer and daughter Kate Carina moved from their Cleveland home into the Gertrude Street house in 1893. Carina Thorne published poetry from the Highgate Hill property. The Thornes’ occupation was short, as they removed to ‘Thornemere’ at Belmont around 1896.

Thorne married Sarah Elizabeth Lane in 1893 and in 1901 he returned to the Gertrude Street house, which had been given the name ‘Prospect Place’. His second occupancy was also short, and in April 1902 embarked on overseas tours to promote his book The Heresy of Teetotalism. Around 1906 Thorne moved to New Zealand and called himself Benjamin Enroth before his death in 1911.

The Gertrude Street house was held in trust until 1911, and was leased under the name ‘Prospect Place’. Advertisements from 1904 mentioned that the villa residence had been ‘thoroughly renovated’ and included drawing and dining rooms, servant’s rooms and stables, reflecting the market its trustees were reaching. Tenants included a civil servant, commercial traveller and a retired surveyor. Prospect Place was sold shortly after Thorne’s 1911 death. It passed through five owners in the 1910s, some owner-occupants and other investment owners.

In 1920, Thorne’s widow Sarah Elizabeth Thorne obtained title to the property. Sarah Thorne adopted the name ‘Carina’ for the Highgate Hill property, likely in honour of her late stepdaughter.

Later, the house had rooms individually leased as Brisbane’s increasing population, desiring to live in inner-city areas like Highgate Hill, led to increased density living. Houses like Carina, once large enough for families and servants, were too large and expensive for individual owners and became boarding houses, a pattern repeated across inner city Brisbane.

In recent years, the house has been returned to a single dwelling.

‘Carina’ is a two-storey timber vernacular house with a tin roof and verandahs on all sides. The house sits across two allotments on a large (660m2) site. There are no other buildings of cultural heritage significance on the site.

as an example of an 1880s timber house in Highgate Hill.

as an 1880s timber house, built to the footpath and located on a prominent rise of the hill.