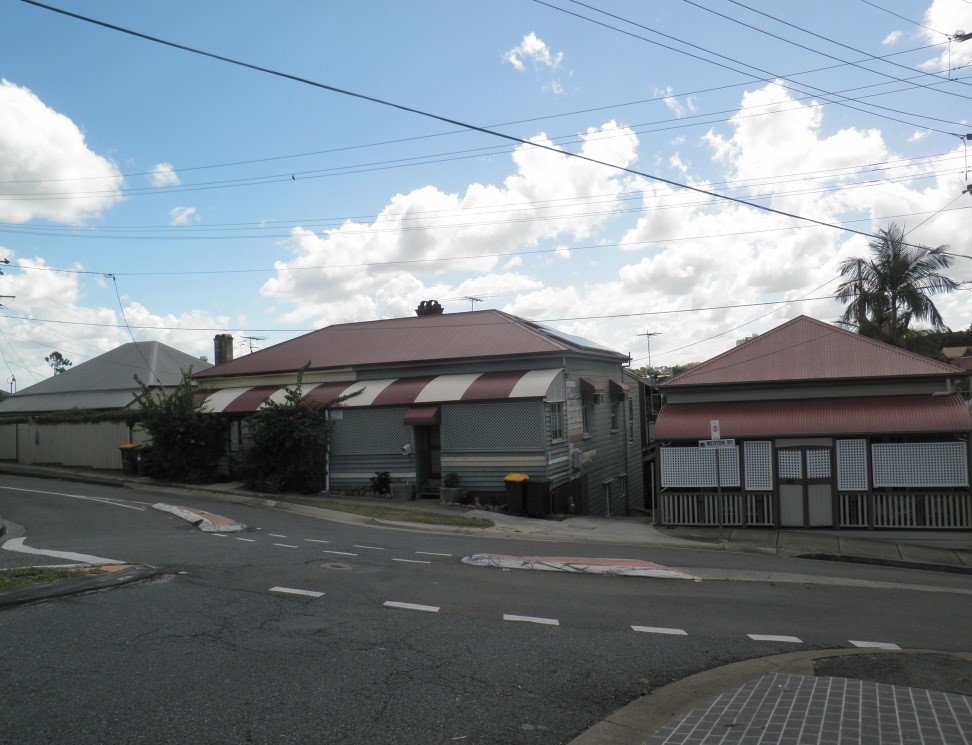 The two timber detached houses at number 51 and 57 Merton Road and the timber duplex in between them at 53 and 55 Merton Road were constructed between 1885 and 1886 for South Brisbane draper, George Richardson and his wife. The houses were designed by respected Queensland architect, A.B.Wilson. All but one of the houses was built as rental properties. The row of nineteenth-century houses were built on a 30 perch block of land and are important in demonstrating the development of housing in South Brisbane prior to the introduction of the Undue Subdivision of Land Preventions Act in 1885. Number 53-55 is of particular significance as an unusual example of a late nineteenth-century timber duplex in the Woolloongabba area.

A B Wilson (Architect)

A B Wilson (Architect)

The ‘Borough of South Brisbane’ was established in 1888 as a separate municipal body from the City of Brisbane and by 1903, South Brisbane had been declared a separate city. Along with all other separate councils in Brisbane, the South Brisbane Municipal Council was amalgamated into the Greater Brisbane City Council in 1925.

The suburb continued to grow in the 1880s as the railway travelled through Woolloongabba from Ipswich to South Brisbane and trams were introduced in 1886. By the 1890s Stanley Street had become one of Brisbane’s primary shopping centres, rivalling Queen Street and Fortitude Valley.

In 1876 the large seven acre land holding was subdivided into small lots. In particular, thirty perches on the corner of Merton Road and Catherine Street was sold to Casper Burdorff in 1876. There was no Burdorff recorded in South Brisbane during the time he owned the land. In 1878 the property was sold to George Richardson, who worked as a draper in a business on Stanley Street beside the Clarence Corner Hotel.

Richardson envisioned the demand for housing for working-class people moving into the Woolloongabba area.  The two timber cottages and duplex, built with their frontages directly to the street, were constructed between 1885 and 1886 and designed by respected Queensland architect, A.B.Wilson who was also responsible for designing buildings such as the Plough Inn and Allan and Stark’s department store in Stanley Street, South Brisbane (now within Southbank Parklands).

Once complete the cottages were swiftly tenanted. Amongst the tenants between 1885 and 1895 were a tinsmith, a tailor, a plumber and a shearer; representative of the working-class area at the time.

In 1885 the Queensland Government introduced the Undue Subdivision of Land Prevention Act 1885. The government began to have concerns with over-population in inner-city areas from as early as the 1870s. The construction of small tenements and tiny cottages on very small parcels of land increased the risk of disease and fire throughout the inner-city suburbs. With the passing of the 1885 legislation it became illegal to subdivide land into lots of less than sixteen perches (405m²). It also regulated the width of new roads and lanes and the distance between new houses and the road. The Merton Road cottages are important in the Woolloongabba area as they demonstrate the pattern of development when its population boomed and housing was in high demand.

In 1885 Richardson died and the property was transferred to his trustees, Peter McLean and John Irving. His widow, Ann, was first recorded on Merton Road in 1887. This was Number 51 and for many years the cottage was named ‘Barthomley Cottage’. The other cottages continued to be rented to a succession of tenants.

In 1903, George Richardson’s estate was finally closed and the row of cottages on Merton Road was advertised for sale:

This row of 1880s timber cottages, built on a relatively small parcel of land, with frontages directly to the footpath, are significant in the Woolloongabba area as they demonstrate its historic development in this period when the area rapidly grew and so too did accommodation for working-class people. The timber duplex is very significant as an unusual example of semi-detached housing in the Woolloongabba area.

as a row of two timber cottages and one timber duplex built in the early 1880s. The Merton Road cottages demonstrate the Woolloongabba area's suburban growth in this period.

as a row of two timber cottages and one timber duplex constructed in the early 1880s.

as a row of two timber cottages and one timber duplex constructed in the early 1880s.

as a highly attractive part of the Merton Road streetscape.