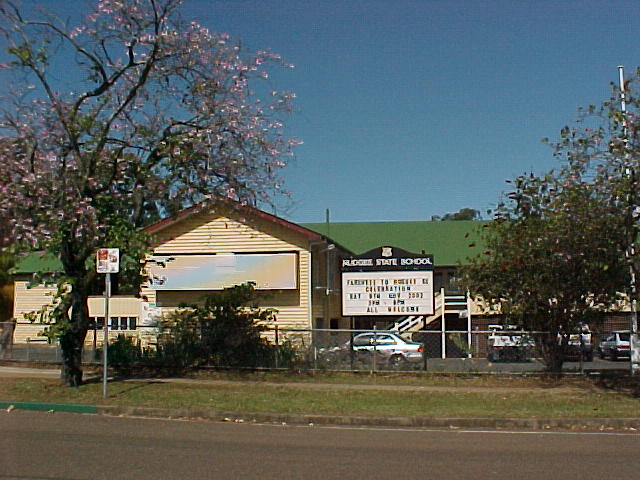 In 1874, the predominantly German farmers of the Nudgee District organised the erection of a local school along Nudgee Road. The slab hut structure proved unsatisfactory and a new building plus a teacher’s residence was placed on the site. By 1924, due to the growth in the local population and the persistent flooding that affected the Nudgee Road site, the Nudgee School Committee pushed the state government for the erection of a new school on a site closer to the two local railway stations. A new building (now ‘A’ Block) was erected in 1928 on grazing land along Earnshaw Road. The school has been the focal point for many community activities for 75 years and has been the marker for the Nudgee District’s progress from rural, farming district to modern Brisbane suburb.

The land sales in the Nudgee District during the 1860’s saw an influx of farmers and their families into the area. Many were German migrants drawn to the area because of its proximity to the former German Mission at Zion’s Hill (Nundah). The population had grown by the 1870s so that the local community felt that they warranted their own school rather than to continue sending their children to the nearest school at German Station (Nundah). A local school would allow the children time to get home and help their parents in the vineyards and fruit and dairy farms that covered the District.

Carl Gerler, Joseph Stuckey, James Robinson, George Harris and John Lowe made representations to the Colony of Queensland’s Board of Public Administration and approval was granted for the erection school at Nudgee. The new Nudgee School opened on 6 April 1874. The school was built on a two-acre block of donated land along Nudgee Road near the present intersection of Toombul and Nudgee Roads. Unfortunately the land was subject to flooding during heavy rain and this problem continued to plague the teachers and students at the school.

The first teacher was Arthur Percival Hancock who boarded in a local farmhouse and was paid £50 p.a. District Inspector Mr. J.G. Anderson first visited the new school in May 1874 and again in October of that year. He reported that the school’s resources, that included just seven desks, were adequate. The first school building was 22 feet by 15 feet and comprised a slab hut with a shingle roof. Nudgee School predated many of the other schools established by local farmers in the areas north of Nundah. Zillmere School would open in 1878, Aspley School in 1890, Chermside School in 1900, Virginia School in 1920 and Boondall School in 1925.

This unsatisfactory structure suited neither Arthur Hancock nor the local community. A Nudgee School Committee was formed, comprising James Robinson (Secretary), George Harris (Treasurer), Henry Smiley and William Schultz, for the purpose of replacing the temporary school building with a more permanent structure. On 28 June 1875, a new school building with a single classroom and side verandah plus a two-bedroom teacher’s residence were completed on the site. Unfortunately the new teacher’s residence had no fireplace and all cooking had to be done in the open. While 43 names appeared on the school’s roll, many of the children failed to attend the school closed within a few months. Pupil teacher James Atthow had reopened the school by the end of the year.

The district had received a major boost when, on 11 May 1882, the Nudgee Railway Station and Goods Shed opened. The station ensured a regular transport service for the local residents, most of who were small farmers. Their crops of oats, corn, grapes and pineapples could now be more quickly gotten to markets and the station also ensured a better mail service for the district. The spot where the Sandgate Railway crossed St Vincents Road became known as Clapham Junction. In 1912, a railway station was built near this site and it was given the name of Banyo Station.

Further growth of the district’s population after World War One saw conditions become cramped in the old single-classroom building. Local residents also wanted the school’s location moved closer to either the Banyo or Nudgee townships that had grown around the two railway stations.

A local deputation went to the Minister for Public Administration on 29 March 1922 to request a new school. It took six years to resolve the issues of a new site and the cost of the new school. The main problem was that the District was so well developed that a suitable block of land for the new school was almost impossible to find. Due to the generosity of Archbishop James Duhig, three acres of grazing land along Northgate (later Earnshaw) Road was acquired from the Catholic Church’s proposed “Beehive Estate”. At the Nudgee Road site, the teacher’s residence was sold off to Alexander May, who moved the building to Toowong in March 1924. But funding for the erection of the new school building at the Northgate (Earnshaw) Road site was not approved until 19 January 1928.

The new Nudgee State School building (now ‘A’ Block), with its three classrooms, was opened, at a cost of ₤1,785, in June 1928. The state Minister for Education, Mr. T. Wilson, attended the opening ceremony that also marked the school’s 50th Jubilee celebrations. Also in attendance were a number of the original pupils from the class of 1874 as well as one of the original Nudgee School Committee members, William Schultz. Shultz had become a Toombul Shire and later, Brisbane City Council alderman.

The school became the focal point of many social and cultural activities for the District’s community. Its tennis court was utilised for tennis parties and the annual school fete was always popular especially as it provided the opportunity for the local children to show off their musical talents through the school’s band. The annual winter athletics carnival also provided entertainment, while the yearly Arbor Day celebrations saw efforts to beautify the school grounds through the planting of trees. During World War Two, air-raid trenches were dug in the school grounds while the end of the war was celebrated by the issuing of a peace medal to all pupils. The school also provided opportunities to broaden the local children’s mind through film excursions, school trips to Roma, Rockhampton and Sydney and the annual Grade 7 Camp at Tallebudgera.

A total of eight buildings have been added to the site since 1928. Nudgee School closed in June 2003 and its pre-school and primary school were transferred across Earnshaw Road to become part of the new “super school” of Earnshaw College (the former Banyo High School).

In 2000, Nudgee School was featured as a place of local heritage significance in the book Banyo Nudgee Heritage Trail that was produced by Alderman Kim Flesser and the Bangee Festival Committtee. The entire site, including the trees is protected under the Natural Assets Local Law of the Brisbane City Council.

due to its relocation in 1928 to accommodate population growth and the need to place the school closer to the Nudgee District's transport hubs.

as an example of one of Brisbane's rural schools.

as the school building was erected due to agitation by the local community's Nudgee School Committee, and because it has been the education centre for Banyo and Nudgee for 75 years.