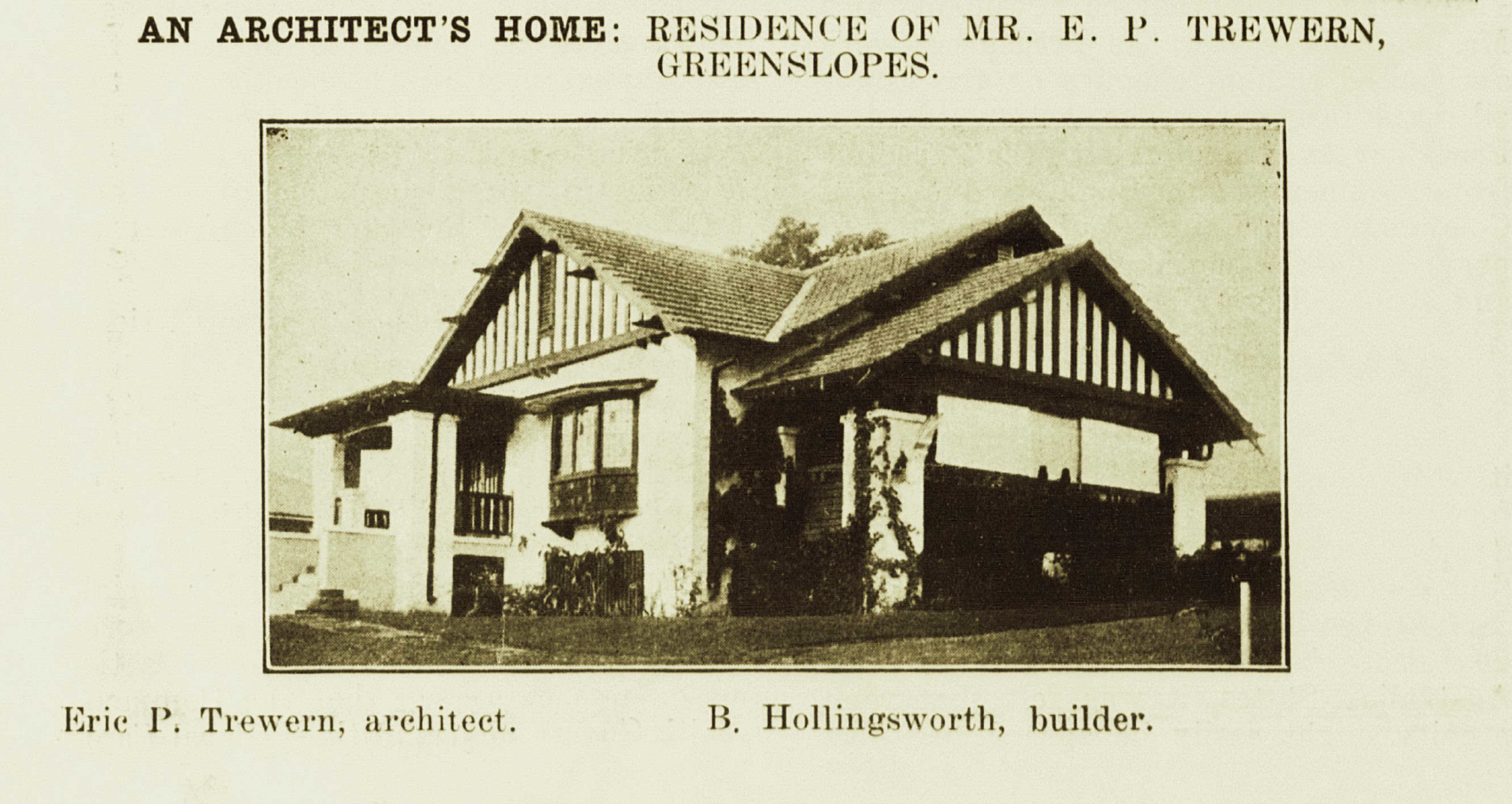 Mon Abri was built in 1923 at a time when middle class and professional people were buying newly subdivided land on the ridges and slopes of the area’s hills and constructing homes that reflected their social and economic standing. The house was built for the Trewern family and was designed by family member and prominent Brisbane Interwar architect, EP Trewern. The house is an important example of Trewern’s early work which incorporates both the bungalow style and Old English elements.

Suburban development of the Coorparoo district escalated in the Interwar period as a result of the extension to the tram line from Stones Corner, along Logan Road and down Chatsworth Road. The main Greenslopes tram terminus was located on the corner of Chatsworth Road and Upper Cornwall Street at the peak of the hill. By 1921 the population of the Coorparoo district was 5187 people.

It was at this time when many middle class and professional people bought newly subdivided land on the ridgelines and rises of the hills in the area on which to build homes reflecting their social and economic standing in the community. Those with lesser means generally bought lots on the lower parts of the hills, thus establishing a defined pattern of development in the district. By the 1930s, houses in the Coorparoo area were described as, “by reason of their topographical relationship and their grouping in Brisbane’s tramway system, possess a community of interest … many of the gentle slopes … command panoramic views … settlement in these localities is towards the highest expression of civic pride, a quality that should make these suburbs among the most beautiful in Brisbane”.1

Alice Trewern and her three sons moved to Brisbane from Bendigo after her husband, William James Trewarn died in 1912. It is unclear why the surname was changed from Trewarn to Trewern, but by the late 1910s the widow was recorded as ‘Trewern’. In 1923 Alice Trewern bought one rood and eight perches of land on the corner of Chatsworth Road and Smeaton Street, Coorparoo. The relatively large portion of land was situated at the rise of the hill below Cavendish Road, which afforded views out to Mt Coot-tha and surrounds. Her architect son, Eric Percival Trewern, designed a new house for the family on the corner lot.

Eric Percival Trewern was born in 1895 and was only seventeen when his father died. In 1916 he secured a position as assistant architect in the Queensland Department of Public Works where he worked until 1920 when he established his own architectural practice in Queen Street.

The height of Trewern’s design success occurred in the Interwar period and he is renowned for his innovative designs incorporating the Spanish Mission and the Old English/Tudor Revival style in residential and commercial architecture. Amongst his finest residential designs is the New Farm house “Santa Barbara” that is considered the best example of the Spanish Mission style in Brisbane. Trewern designed many commercial buildings in central Brisbane many of which no longer exist. One important extant building is the Inchcolm Professional Chambers on Wickham Terrace. Trewern was an active member of many prestigious architectural societies in the pursuit of improving professional architectural standards in Queensland. The practice continued until Trewern’s death in 1959.

In May 1924, the Architectural and Building Journal of Queensland included a photograph of the newly completed house and in April 1925, the Daily Mail also included a feature photograph entitled ‘Substantial and Attractive Residence at Greenslopes occupied by Mr. Eric P. Trewern’.2  Further focus was placed on the house in 1926 when, once again, the Architectural and Building Journal of Queensland, featured a photograph and story, entitled ‘An Architect’s Residence’:

The building is constructed of brick and cement, and contains three bedrooms, lounge, dining-room, sleeping-out and front entrance porches. Internally the walls are finished in rough plaster, kalsomined, the wood work being stained antique, finished with mock beam ceilings, and glazed sliding doors between the lounge and the dining-room. The house contains a modern kitchen and bathroom … and has been erected approximately three years.3

The gracefully designed house was certainly less imposing than many of Trewern’s commissions, yet the quality of the design and the blend of the use of the bungalow style and ‘Old English’ elements, ensured Mon Abri was celebrated as one of his finest.

Alice Trewern died in 1935 and the property was transferred to William Leonard Trewern, who was a qualified public accountant and then, a year later to the third brother, Alexander Ira Trewern. Eric Percival Trewern and his wife Doris Trewern continued to reside at the address until 1934, when he and Doris Trewern moved into a newly constructed masonry house, also designed by Trewern, a few properties from the original house in the same street and across the road. The later house, however, does not display the important early 1920s architectural elements distinctive to Mon Abri.

The subject house remained in the Trewern family until the 1970s.

This area of Coorparoo is mostly residential and has developed at different stages. This is demonstrated in the different styles and periods of buildings on display. Smeaton Street consists mostly of Federation and Interwar period single storey houses all of similar scale and generally narrow frontages. ‘Mon Abri’s’ elevated corner position gives it a strong presence on the street and views toward the Brisbane CBD and hills to the west.

The property is enclosed by a small aluminium fence along Smeaton Street and rendered brick wall along Chatsworth Road. The driveway leads to a standalone single garage in the north-east corner of the site. Pedestrian access is located at Chatsworth Road through a timber gate in the rendered brick wall. The front yard is predominantly open lawns with a few mature trees. The backyard contains a swimming pool in the south-east corner and small garden to the northern boundary.

The subject house is approximately rectangular in layout, single-storey at the northern end and two-storey at the extended southern end where the site falls away.  The roof is a dominant gable form with a hip roof at the south, clad in terracotta roof tiles. A chimney is located at the rear of the house and is rendered with a flat capped top.

The porch projects from the western elevation with a flat corrugated iron roof. the feature bay window is adjacent to the entry porch. Clear leadlight casement windows are common features around the house in single, double and triple configurations. Different types of aluminium framed windows are found at the southern end of the house, including fixed, sliding and hopper windows.

The southern elevation features a garage door at the lower level. At the rear of the house is a pergola of steel construction under a skillion colorbond roof. A small lean-to structure is to the north of the pergola.

The house has been altered in several stages, this includes in the late twentieth century the two-storey extension to the south and enclosing of a veranda between the original house and extension and the garage at the north of the property. A recent addition appears to be the pool, rendered boundary wall and pergola. ‘Mon Abri’ appears to be in good condition.

as a graceful, interwar home displaying elements of the bungalow tradition and ‘Old English’ style, Mon Abri is representative of Coorparoo’s suburban development when professionals had houses constructed on the ridges and rises of the hills.

as an intact and representative example of a finely designed, yet modest, interwar house set in generous grounds of 1215m².