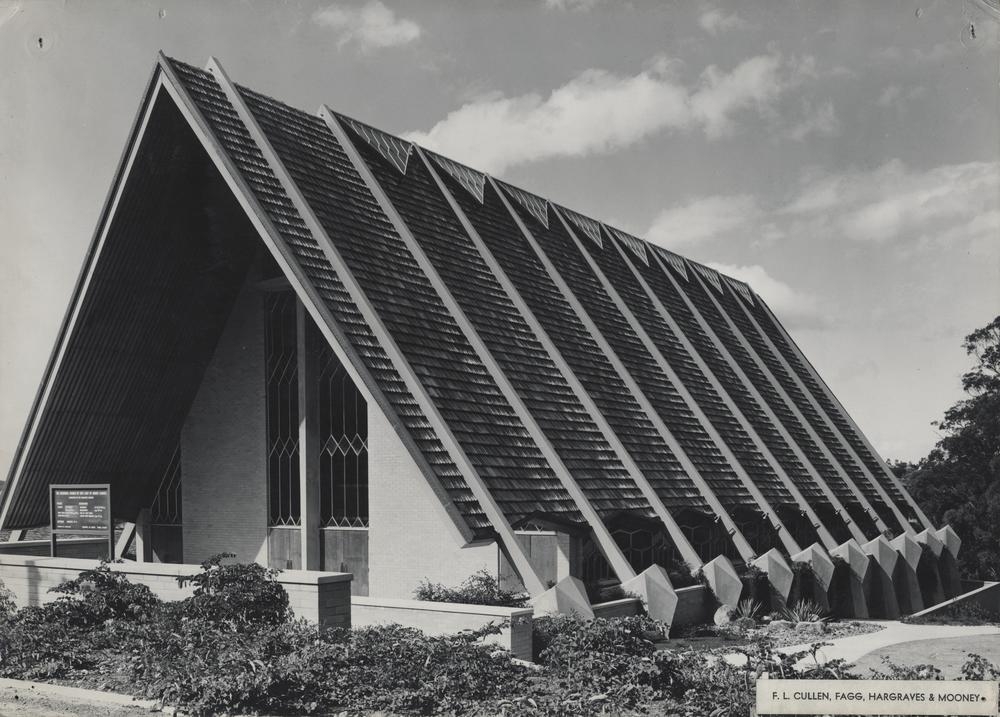 The Memorial Church of Our Lady of Mount Carmel was designed by the architecture firm Cullen, Fagg, Hargraves & Mooney and built by Norman F. Corbett in 1963-64, for the Carmelite Fathers in Queensland. It was built at a time when many churches were being constructed in Brisbane in response to population increases and suburban expansion. Architecturally, it is one of the finest churches built in Brisbane from this period. It is a striking and intact example of a 1960s Modernist church.

In February 1928, the Sisters of Loreto opened a school at the convent they had established in 1927 in a large house on Cavendish Road at Coorparoo. Father Bucas was appointed as Chaplain of the College by Brisbane Archbishop, James Duhig, on the condition that the sisters would allow local residents to join them for Mass. The Loreto College space, however, soon became too small and Father Bucas subsequently converted half of his neighbouring house into a chapel.

The Carmelite Fathers arrived in the parish at Coorparoo in January 1937, after being appointed by Archibishop Duhig. They settled into Bucas’ former residence/chapel on Cavendish Road. The first two Carmelites appointed were Father James O’Sullivan and Father James Meehan. They saw the need for a proper church and parish school and a site on the corner of Cavendish Road and Norfolk Street was acquired from Colonel and Mrs Evans for the purpose.

The Carmelites converted the Evans family home into the priory and architect J. P. Donoghue was commissioned to design a two-storey combined church and school building for the new site. The foundation stone was laid by Archbishop Duhig in 1939. The Catholic Leader reported at the time, “The initial step in the erection of the first church conducted by the Carmelite Fathers in Queensland was taken on Sunday last, at Cavendish Road ... when His Grace the Archbishop … blessed and placed in position the foundation stone of the church-school of Our Lady of Mt Carmel in that district”.1 The new church and school building was soon completed. In 1940 the Courier Mail reported the dedication of the new church and school and the intention to expand the facilities on the site, including the construction of a new church which would face Cavendish Road, “the Carmelite Fathers intend to build a monastery and fine parish church facing Cavendish Road later”.1

As the congregation grew, it became apparent that both a new church building and expansion of the primary school was required. It is unclear when, but sometime in the 1950s, Donoghue began to draft plans for a new Catholic ‘precinct’ which included a new parish hall, school, church, convent and priory. This plan for the site never came to fruition and Donoghue died in 1960. Nevertheless, the intention to have a new church constructed for the parish facing Cavendish Road was still a priority for the Fathers. In 1962 the Carmelite Fathers lodged an application with the Brisbane City Council for the construction of a new church which was approved in 1963.

The Memorial Church of Our Lady of Mount Carmel was designed by the architectural firm Cullen, Fagg, Hargraves & Mooney, who, at the time received several commissions for various projects throughout Brisbane from the Catholic Church. Amongst them was Our Lady of Lourdes St Therese, Sunnybank (1963), St Joan of Arc, Herston (1963), Our Lady of Dolours, Mitchelton (1964), St Marks, Inala (1968, Holy Cross, Wooloowin (1968), St Pius X, Salisbury (1969) and St Ita’s, Dutton Park (1972).

There were over one hundred new churches constructed in the 1960s in Brisbane. Only a few of these were remarkable expressions of Modernist ecclesiastical architecture, such as the Memorial Church of Our Lady of Mt Carmel.

The 1960s was an era of great change in the Catholic Church throughout the world. The Second Ecumenical Council of the Vatican, better known as Vatican Council II, or Vatican II, was a series of assemblies from October 1962 until December 1965 amongst the leading figures of the Catholic Church which were held at the Vatican in Rome. The council was a response to the ever-growing disenchantment of many Catholics in relation to the views and position of the Catholic Church in a post-war and modern world. It was increasingly seen to be insular and out of touch with a rapidly changing world.

Following this philosophy, several of the new churches constructed in Brisbane in 1960s and the 1970s were designed with the altar positioned in the centre of the church and the pews surrounding it; this was a move away from the traditional cruciform layout of a Catholic church.

In April 1963 the foundation stone for the new church was blessed by Archbishop Duhig. At the close of his address to the dignitaries attending and the congregation, Duhig expressed his hope “that it would not be long before he could congratulate the parish on the opening of one of the most wonderful churches in the city”.1

Although the first service was held in the church in March 1964, it was not until June 1965 that the church was officially opened. The delay was attributed to several of the church’s components including the sacristy, confessionals, side altar and youth room not having been completed by that time.

Once the work had been completed, it was officially blessed by the then Archbishop of Brisbane, Archbishop O’Donnell, who had been appointed following the recent death of Archbishop Duhig. The blessing of the church was attended by many church dignitaries as well as Messrs Cullen, Fagg, Hargraves and Mooney. The Archbishop acknowledged the striking architecture of the church and stated that “it was with great pride that we worship in this church because we realise we have a worthy edifice for the worship of God in the name of His Holy Mother”.1

Unlike some of the Catholic church’s Cullen, Fagg, Hargraves and Mooney designed in the 1960s, which adopted the changes resulting from Vatican II, it was at the request of the Carmelite Fathers that the design of the Memorial Church of Our Lady of Mt Carmel retained the traditional layout of a Catholic church with the altar placed at the front of the congregation faced by several linear rows of pews.

The interior of the church has several ecclesiastical sculptures, including the striking piece above the altar. A very significant feature of the church are the Stations of the Cross, which are positioned within the windows each side of the church. Each Station leadlight window was made in Florence, Italy. By 1995 the windows had been damaged by the strength of the sun and required re-leading, “the sun had dried the cement which holds the images together so much that it has given it a sandy texture”1, stated parish priest at the time, Father Hofman. The fourteen panels were lovingly restored and cost the parish over $5000.

The striking Modernist design of the church was recognised in 1965 when it was nominated for the Bronze Medal Award for the Building of the Year, by the Queensland Chapter of the Royal Australian Institute of Architects. It remains one of the finest examples of Modernist ecclesiastic architecture in Brisbane.

The church is a striking “A-frame” style, brick building, with a steeply-pitched, tiled roof extending almost to ground level. The roof trusses are exposed on the exterior and are anchored in sculptural concrete bases. A series of skylights are inset along the ridge of the roof and the lower edges of the roof form a “zig-zag” pattern. A matching brick fence runs along the Cavendish Road perimeter and features a statue of the Lady of Mount Carmel. Stairs lead down from footpath level to the entry of the church and matching brick fences also surround the base of the church.

A large cross, extending from the apex of the roof to the ground, dominates the front elevation of the building, which also includes large areas of leadlight windows. The roof projects forward at the front of the church, forming an undercover area. Entry is through double doors either side of the base of the cross. There are also a set of double doors in either corner of the front elevation.

The roof is the dominant feature of the church interior and the altar, with a sculpture on the wall above, as a focal point. A line of windows runs along one side under the roof level and floor-to-ceiling vertical windows alternate with brick columns either side of the altar. There is a central nave, with rows of timber pews either side.

The church features leadlight windows depicting the Stations of the Cross, which were made in Florence, Italy in 1963. These windows are an unusual and significant feature which contribute aesthetically to the interior space. The church also contains a foundation stone, with the dedication in Latin, and two commemorative plaques. The first plaque reads: “The Memorial Church of Our Lady of Mount Carmel Under the direction of the Very Rev G D Moore, O Carm., Parish Priest (1961-1967), this church the northern shrine of Our Lady of Mount Carmel, was designed by Messrs Frank L Cullen, Fagg, Hargraves and Mooney, Architects and Constructed by Mr Norman F Corbett, Builder. The first Mass in this church was celebrated on Sunday, 8th March, 1964.” A second plaque, presented by the Coorparoo and Districts Sub-Branch of the Returned and Services League of Australia, records: “This memorial perpetuates the memory of those servicemen and women and citizens, who through their sacrifice and effort during the wars of our time defended and protected our rights to a free and democratic society in Australia today. Lest We Forget.”

as an excellent example of Modernist ecclesiastical architecture.

as a striking and intact example of a 1960s innovative Modernist church.

Our Lady of Mt Carmel is important to the Coorparoo Catholic community as a major symbol of faith and as an ongoing place of worship. 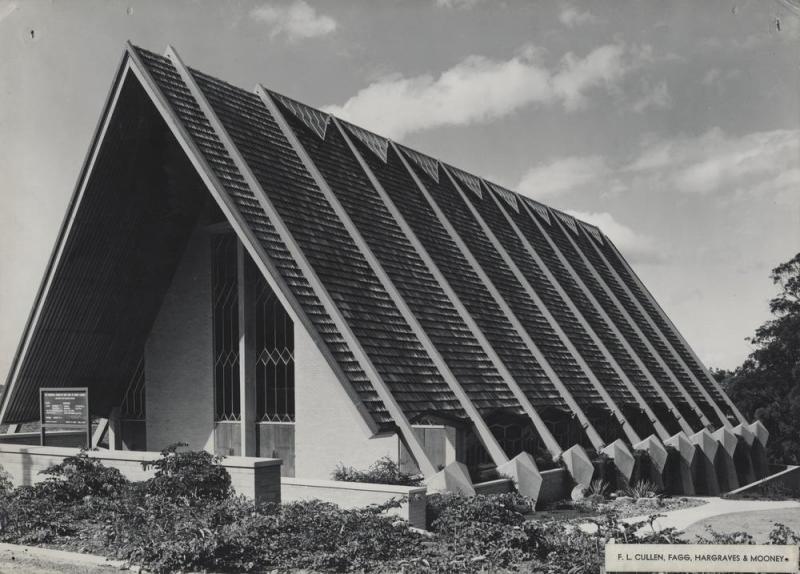 The architects were Cullen, Fagg, Hargraves & Mooney. The building, located at 312 Cavendish Road, was nominated for the Bronze Medal Award of 1965 for the Building of the Year by the Queensland Chapter of the Royal Australian Institute of Architects. (Description supplied with photograph)