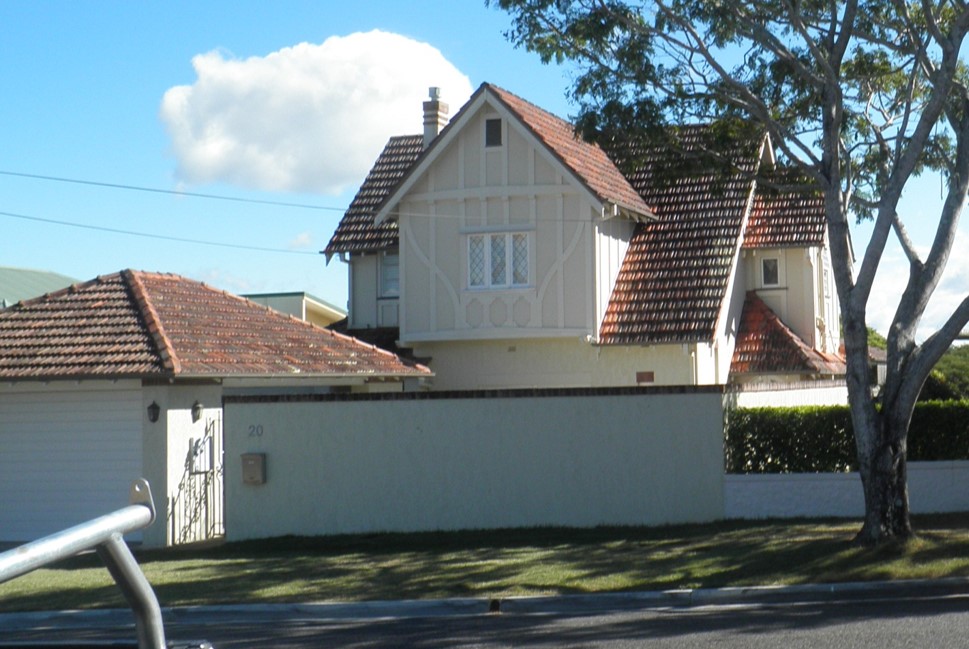 This two-storey masonry house was built in 1936 for successful Brisbane solicitor, Leo Garton Catt, who built the house following his marriage to his wife, Alma Hazel Catt. Designed by architectural firm, Blackburne and Gzell, the house is a fine example of Interwar Old English style architecture in Brisbane. Built as part of the Stonehaven Heights estate, it illustrates the suburban development of Holland Park when wealthy and professional Brisbane residents had modern architect-designed houses built on the tops of its hills. The house makes a strong contribution to the Percival Terrace streetscape.

At the beginning of the twentieth century, the suburb we know today as Holland Park was predominately farms. It was the extension of the tramline from Greenslopes to Holland Park in 1926 which became the catalyst for suburban development. By the late 1920s there was a post office, a hotel and a primary school.

As the large farm holdings were subdivided in the 1920s and 30s, various land estates were created in the area, including the Stonehaven Heights estate. Marketed at those with financial means, the estate took advantage of the high position of what was then known as Mount Pleasant, and its high ridgeline which afforded views from all directions. The estate was extensively advertised in the mid to late 1930s in the Brisbane newspapers:

Stonehaven Heights, Mount Pleasant, 57 Ideal Home Sites, Amidst Delightful Surroundings and Modern Bungalows; the estate is one of Brisbane’s beauty spots, and is conveniently situated … with glorious panoramic views of the city and mountains … right in the track of the cool summer breezes, and every modern convenience – water, electric light, gas, and telephone.1

Stonehaven Heights estate was promoted as being close to the tramline, public school and parks. By the late 1930s the majority of lots had been sold and suburban development had transformed the estate. A series of large, architect designed homes were built on the ridgeline amongst more modest but aesthetically pleasing houses creating one of Brisbane’s most sought after residential addresses.

In May 1939 Stonehaven Heights was featured in the Telegraph’s ‘Better Homes’ section under the heading “A Colony of Character Homes”. The feature highlighted the efforts made by all the property owners in the estate to ensure the aesthetics of the estate  were maintained, in relation to the fine houses, gardens and settings, “the object is to encourage each home whether small or large to give atmosphere to its neighbour and therefore build to an idea”.1  The article described the wide range of architectural designs in the estate such as Spanish Mission and English Revival, “It is a pleasure to drive amongst these well-planned and maintained homes … those people who own homes on Stonehaven Heights are to be congratulated”.1

In 1936 Leo Garton Catt purchased just over twenty perches of land on Percival Terrace, Holland Park. Catt was a successful solicitor in Brisbane from the 1930s well into the 1980s. His legal firm, L. G. Catt and Co., had their chambers at 180 Queen Street in the Brisbane CBD. In May 1936 plans for the construction of a new ‘brick and tile’ house were approved by Brisbane City Council. Later that year, Leo Catt married Miss Alma Hazel Forbes. The couple were popular in the Brisbane social pages with articles and photographs of the wedding featured in several newspapers. The newly wed Catts were also featured in the social pages as they left for their honeymoon in September 1936. As this was taking place, their new family home was being constructed on Percival Terrace.

As befits a socialite couple, the design of the new house was very fashionable for the time. Catt commissioned prominent Brisbane architectural firm, Blackburne and Gzell, to design the house. Godfrey Blackburne and Vitaly Gzell established their practice in Brisbane in 1934, continuing their partnership until 1953. Blackburne had earlier received the student gold medal of the Queensland Institute of Architects in 1931. The firm became known for their designs in the latest Interwar styles and designed some of Brisbane’s most fashionable Interwar residences; including several ‘Old English’ and ‘Spanish Mission’ designs in suburbs such as Ascot, Clayfield, Coorparoo, Graceville, St. Lucia and Holland Park.

The subject house was near completion by November 1936 and a large photograph was included in the Telegraph under the headline, “Ideal Home for the Future”.1 Although the article was about an exhibition showcasing the latest building trends and fashions, the caption beneath the photograph of the house read, “The half-timbered effect has been used to advantage in the new home of Mr. and Mrs. Catt, in Percival Street, Holland Park”.1 This illustrates how modern and well-designed the house was.

In March 1937 the home was featured in a large article in the Sunday Mail’s ‘The Home’ section. Both the exterior and the interior were described with a focus on the modern and well-designed architecture designed by Blackburne and Gzell. By 1937 the Catts were residing in the Percival Terrace house and continued to be often mentioned in the Brisbane social pages.

Leo and Alma Catt resided in the house into the 1980s. The Catt family retained the property until 1997 when it was sold.

Holland Park is strongly characterised as a residential area located in the green and moderately hilly south-eastern suburbs of Brisbane. Set along the prominent ridgetops, the early houses of the area are large, modern architect designed homes in a variety of styles popular in the Interwar period, with later development being primarily smaller Post-war timber houses. The subject residence shares its ridgetop location with a number of these early homes, all having prominent views across the rear yards to the Brisbane CBD and leafy surrounds.

Set on a steep block, the residence sits level with the street, incorporating a double garage to the street edge western boundary and a pool within the front setback. A tall rendered masonry fence with brick capping along the street boundary screens the pool and paved terrace to the front of the house. A tall timber paling fence lines the remaining boundaries. The house has a recent level added underneath the rear extensions due to the slope of the land and connects with the landscaped terraces of the large north-west facing backyard. A large shade tree with decking under is in the western lower corner. Lawn with border planting and a large water tank on the lower level are accessed by paved landscape stairs, with further hedging and gardens to the stepped terraces.

The exterior of the house is rendered masonry, with half-timber details to the upper level. The steeply pitched, glazed concrete tiled, transverse gable roof has a hipped roof to the single storey sections to the sides and rear. There is jettying of the upper front room with a ventilated gable end detail to the street. There are exposed roof timbers to all eaves. A rendered brick chimney with face brick details is located to the west of the front gable.

The panelled timber front door is under a masonry entry porch. Timber casement windows, with diamond leadlight glazing feature prominently on the front elevation. There are some narrow fixed leadlight windows with face brick lintels and sills to the internal stair.  There are arched top French doors featured to a side entry and new French doors noted to the lower front elevation.

The interior of Catt’s House has not been inspected. Publically available photography, including floor plans, have been reviewed. The interior includes timber floors, brick fireplace, and stately internal timber staircase and plaster walls. The timber stair case is enclosed underneath and has been painted and carpeted. There are some ornate cornices and skirtings. Much of the original feature timber detailing has been removed or painted out, some openings have been widened and internal leadlight doors removed. New coffered plasterboard ceilings installed with recessed light fittings and air-conditioning has been installed throughout. A modern kitchen and bathrooms have also been installed.

Catt’s House appears in excellent condition. The exterior of the residence appears largely intact to the front presentation, though now less visible from the street. The half-timber details have been painted to match the wall finish, reducing the contrast shown in historical photographs. A hipped tiled roof double garage, pool and tall masonry front fence has been added to the front of the house. A two storey addition to the rear continues the living areas of the main entrance level, out to a timber deck with an additional level underneath. The tiled gable roof of the addition has a low pitch. There have been considerable alterations to the living areas, though the original staircase remains with some integrity.

as an architect-designed house built in 1936 as part of the Stonehaven Heights estate, it is representative of Holland Park’s suburban development, with houses planned in a layout and orientation to take advantage of the topography on large, elevated sites during the Interwar period.

as an elegant 1930s house designed by Blackburne and Gzell in the ‘Old English’ style which contributes to the Percival Terrace streetscape. 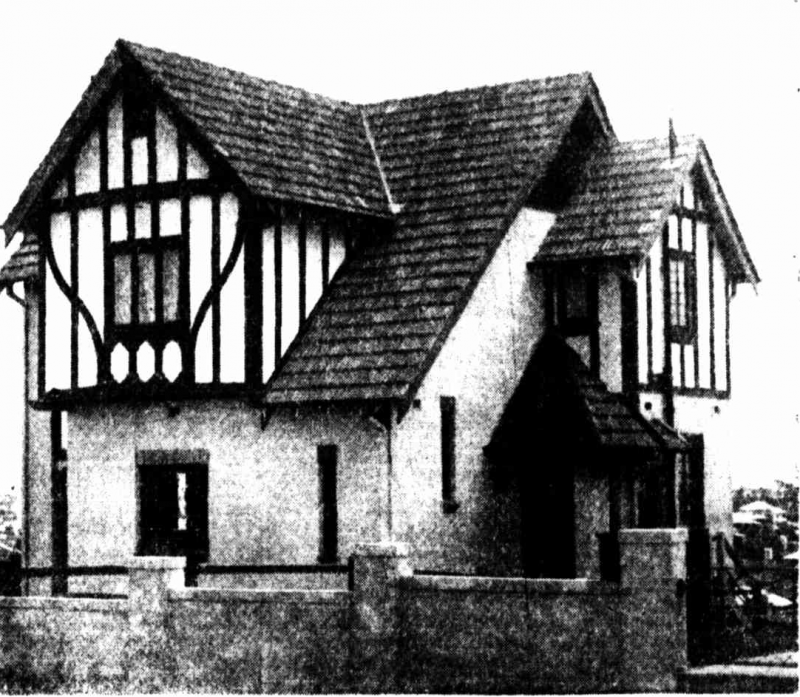