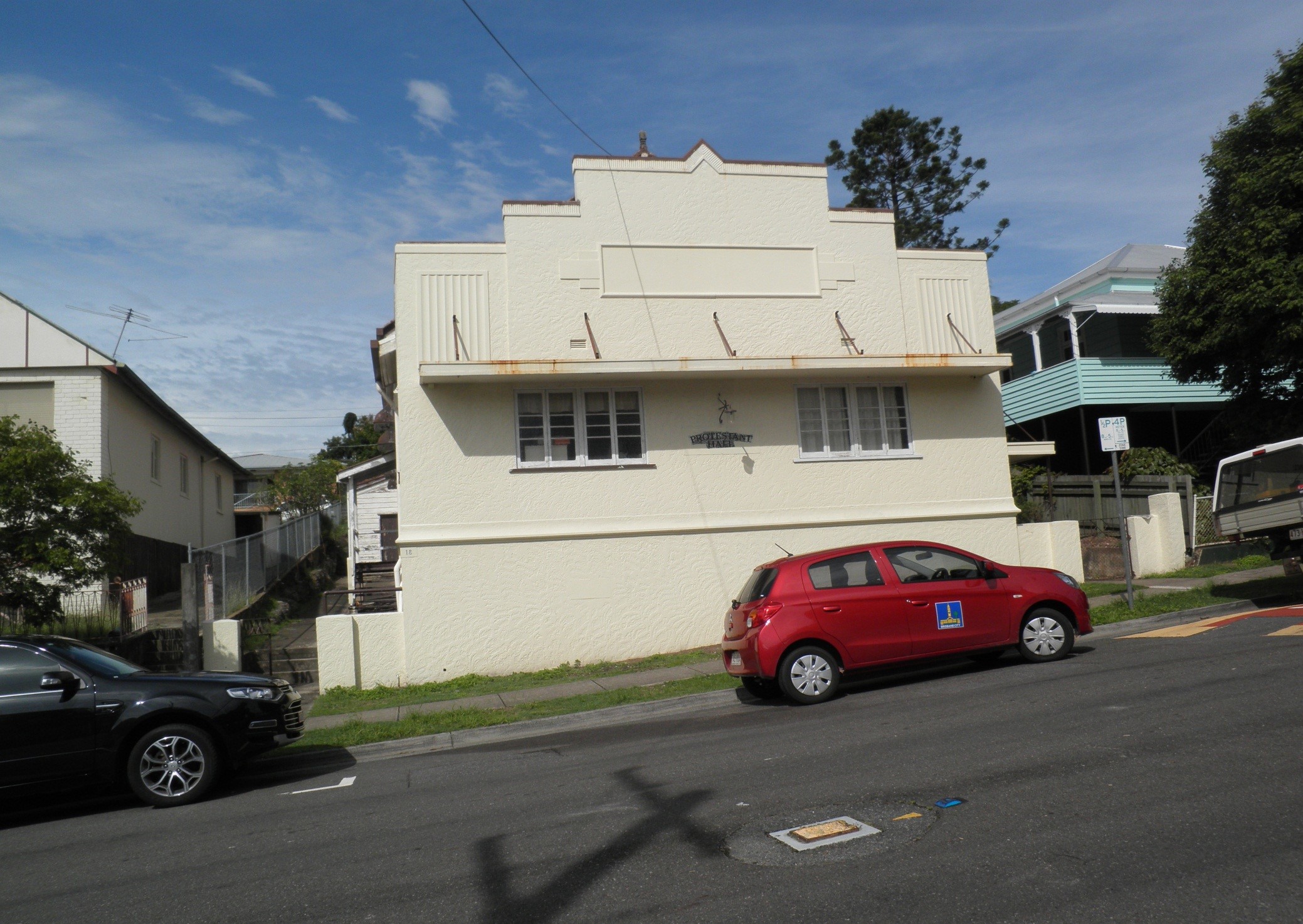 The hall was originally the Duke of Clarence Lodge for the South Brisbane order of the Manchester Unity Independent Order of Oddfellows (MUIOOF). It was built in 1891 and became a social centre for the movement. In 1923 the Protestant Church purchased the property when it became known as the Protestant Hall. The Loyal Orange Institute of Queensland acquired the hall in 1927 and in 1940 carried out additions which included the construction of the ‘Art Deco’ style façade and the extension of the hall.

First known as ‘One Mile Swamp’, land sales began in the Woolloongabba area in 1855. The land was very swampy and initially land sales were slow. Most of the land at this time was used to rest livestock which had been brought up to Brisbane along the Logan Road. The first hotel in the area, the Clarence, was established in 1864 to provide hospitality to those driving the livestock. The area, however, began to be dotted with cottages and shops were established along Stanley Street in the mid-1860s. By the 1890s Stanley Street had become one of Brisbane’s primary shopping centres, rivalling Queen Street and Fortitude Valley. The suburb continued to grow in the 1880s as the railway travelled through Woolloongabba from Ipswich to South Brisbane and trams were introduced in 1886.

In 1891 the Corporation of the Loyal Duke of Clarence Lodge of Oddfellows of Manchester Unity purchased 23 perches of land on Merton Street. This South Brisbane lodge had been officially established in 1864 when the first meeting was held at the Clarence Hotel on Stanley Street. In 1877 the lodge constructed a hall on the corner of Vulture and Stanley Streets. By the 1890s, however, this had proven to be unsuitable and the decision was made in March 1891 to build a new one, “The Duke of Clarence Lodge, Manchester Unity, have decided to build a new hall on their property, Merton Road”1

By August 1891 the new hall had been completed and the official opening ceremony had taken place, “After the general lodge business had been disposed of the lodge went into harmony, when some very good songs and recitations were rendered and much appreciated”1. The hall continued to be used for the Duke of Clarence Lodge’s meetings and fundraising events.

The MUIOOF was originally founded in Manchester, England, in 1810 as a ‘benevolent fraternity’ organisation. It provided a form of medical and funeral insurance to help offset the high costs of sickness and death during an era of poor public health standards, high funeral costs and no government funding for hospitals and medical expenses. Members made regular contributions to their lodge funds in return for payment upon death or illness to either
themselves or their dependants.

In 1923 the hall was sold to the City of South Brisbane Protestant Hall Company Limited. Four years later the property was transferred to the Loyal Orange Institution of Queensland, a Protestant fraternity, which held meetings and gatherings in the hall. It continued to be known as the Protestant Hall and remained a social centre for those involved in the Protestant Church.

In 1940 extensive additions were made to the 1891 hall. Designed by Brisbane architects, Ashley Shaw and Carlyle, the new additions included the ‘Art Deco’ style stucco front, which accommodated new toilets in the basement, storeroom, secretary’s office, waiting room and lobby. The main hall was extended 10 feet at the rear, making the hall 57ft x 30ft. Within the extended main hall, a new stage “with moulded plaster proscenium is being built, and a new supper room, divided from the stage by wide accordion doors to increase the seating accommodation of supper room if necessary”1.  The additions cost £1490 and provided “seats for 600 people in the main hall, to which had been added a supper room”1

The hall continues to be in the ownership of the Loyal Orange Institution of Queensland and is the only Loyal Orange Lodge remaining in the state.

This timber hall displays ‘Art Deco’ elements in the front rendered façade with its suspended awning. Behind is the nineteenth-century hall with gabled roof and timber flying gable. The corrugated metal roof also has two timber triangular ventilation openings. There is a series of timber sash windows. The rear 1940s extension of the hall has been built to fit exactly with the earlier part. The interior of the hall retains many original nineteenth-century elements as well as interwar elements. The timber floors and stage remains.

as evidence of the presence of friendly societies in South Brisbane in the late nineteenth century when they were increasing in popularity due to high unemployment and a lack of government support for healthcare costs.

as a good representative example of a purpose-built hall in the then municipality of South Brisbane.