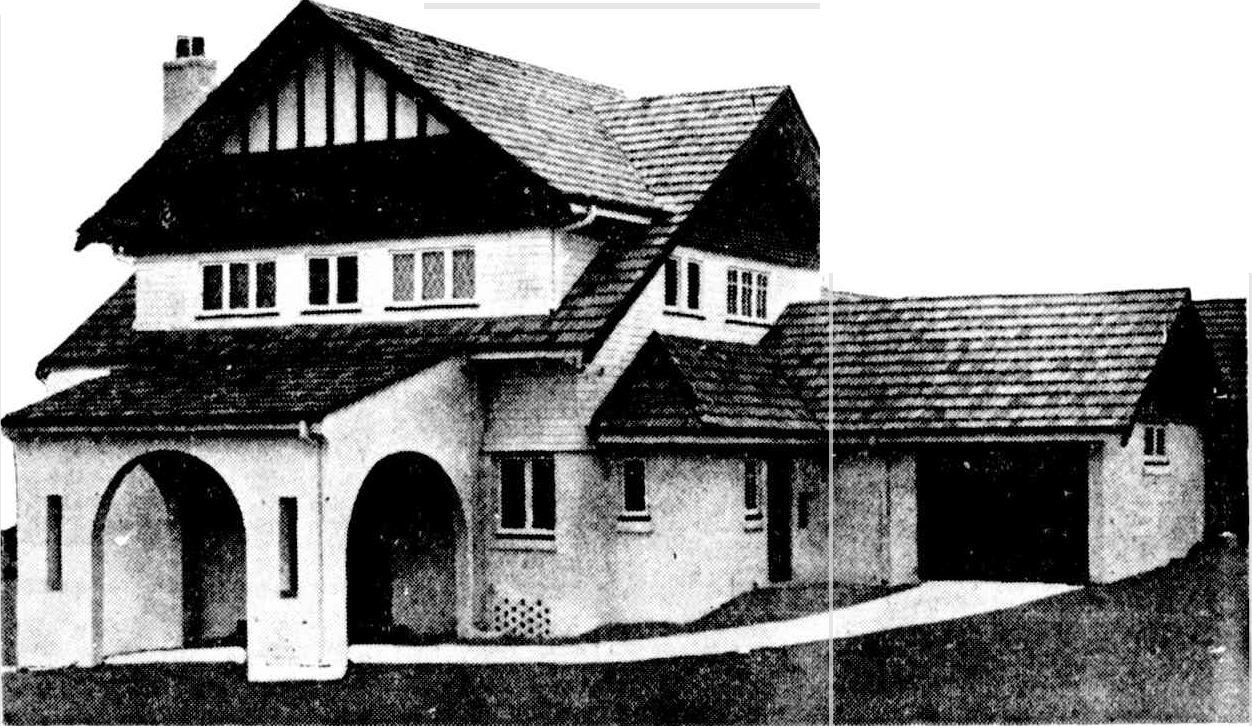 Suburban development of the Coorparoo district escalated in the Interwar period as a result of the extension to the tram line from Stones Corner, along Logan Road and down Chatsworth Road. The main Greenslopes tram terminus was located on the corner of Chatsworth Road and Upper Cornwall Street at the peak of the hill. By 1921 the population of the Coorparoo district was 5187 people.

It was at this time when many middle class and professional people bought newly subdivided land on the ridgelines and rises of the hills in the area on which to build homes reflecting their social and economic standing in the community. Those with lesser means generally bought lots on the lower parts of the hills, thus establishing a defined pattern of development in the district. By the 1930s, houses in the Coorparoo area were described as, “by reason of their topographical relationship and their grouping in Brisbane’s tramway system, possess a community of interest … many of the gentle slopes … command panoramic views … settlement in these localities is towards the highest expression of civic pride, a quality that should make these suburbs among the most beautiful in Brisbane”.1

Henry Roy Hancock purchased just over quarter of an acre of land on the corner of Mackay and Verry Streets in March 1936. Henry Roy Hancock married Irene Gordon Shaw in June 1936 and by late October 1936, this fine English-style house had been built. Featured in the Courier-Mail on 27 October 1936 as an “English Style acclimatised”, Hancock’s “recently erected home” illustrated the successful adaptation of “domestic styles from other climes and other times to local conditions”.

The half-timbered house with a brick veneer lower-storey and timbered exterior to the upper floor demonstrated the artistic qualities of wood while exemplifying how departing from a slavish loyalty to one construction material could achieve exceptional aesthetic outcomes. The inside of the home featured numerous examples of the exquisite effects that could be achieved through the use of many varieties of Queensland timbers, such as maple, ‘bird’s eye’, ‘hoop’ and ‘knotty’ pines.1

The incorporation of numerous varieties and finishes of timbers was to be expected of a home for Mr H.R. Hancock, a member of the then well-known timber milling firm of Hancock & Gore. Henry Roy Hancock was the eldest son of Josiah Henry Hancock and great-grandson of the founder of the timber firm, Thomas Hancock. Thomas Hancock migrated from Cornwall in 1855 and established a sawmill in Ipswich in 1867 with his sons, Josiah and Thomas junior. By 1886Hancock & Sons employed 274 people.1 Joseph Gore joined the firm in 1904 and the company was listed on the Stock Exchange. Under the leadership of Henry Roy Hancock’s father, Josiah Henry Hancock, the company expanded rapidly and by 1916 had mills in thirteen rural centres, five in the Brisbane metropolitan area and two in northern New South Wales. Josiah Henry Hancock was chairman of the Timber Merchants’ Association and in the 1930s he and a consortium of timber merchants purchased unprofitable state-owned mills in Brisbane and Yarraman. His own firm also installed a veneering plant in 1930-31 and became Australia’s largest producer of plywood by 1945. At that time Hancock & Gore was the second largest employer in Queensland, after Queensland Railways. As well as the logging mills of Hancock & Gore, Josiah Hancock headed seven subsidiary companies including Brown & Broad, the Timber Corporation Ltd, Burt’s Transport Ltd and Hancock & Gore Homes Ltd.1 Josiah Hancock died in 1945 and Henry Roy Hancock rose from the board of Directors in the 1930s to Managing Director of Hancock & Gore.

It was during this period of company prosperity and expansion that H.R. Hancock’s home on the corner of Mackay and Verry Streets Coorparoo was built. Another son, E.S. Hancock also built an outstanding “period” home in Welwyn Crescent in the Surrey Hills Estate Coorparoo in 1936. This house is still standing but has been greatly extended and altered. Both houses were designed by notable interwar architect Charles Herbert Griffin.

Charles Herbert Griffin was born in London in 1879 and trained as an architect in London. By 1915, Griffin was in Queensland and employed by the Queensland Workers Dwelling Board as a draftsman. From 1919 – 1922 Griffin worked as a partnership, Chipps and Griffin. Griffin became a member of AQIA in 1923 and registered as an architect in Queensland in 1929. He was an Institute of Architects councillor in 1933-34.1 Griffin specialised in adopting and adapting traditional English domestic architecture for well-to-do Brisbane residents. His own striking Tudor revival home was also featured in the Sunday Mail on 21 October 1934 with its “distinctly English entrance adding distinction to this home”.1

Henry Roy Hancock and his wife added an extra almost 20 perches to their land in 1952 and owned the house in Mackay Street until 1954. They remained in Coorparoo, living in Cavendish Road in the 1950s.

The subject house is a tall two-storey masonry and timber residence of the Interwar Old English style located on a large corner site in Coorparoo. Principle features of the place are the tiles transverse gable roof, porte-cochere and large garden setting.

Coorparoo is a suburb with a mostly residential character located south of the Brisbane central business district. The area mostly consists of one or two storey detached dwellings with some larger multiple dwelling buildings. The subject area of Mackay Street features Interwar one or two storey dwellings with a few contemporary houses and a substantial apartment building. Many properties have irregular shapes and there is little consistency in setbacks from the street.

The site boundary is lined with shrubs and hedges. There are timber gates at both the Verry and Mackay Street boundaries, the gate at Mackay Street has stone piers and brick retaining walls either side. A concrete strip driveway bordered by hedges leads from both gates to the porte-cochere of the house which is located at approximately the centre of the site. The subject house has large setbacks from both the street boundaries, particularly from Verry Street. The subject property has a large yard surrounding the house unlike other properties in the immediate area. The western and southern parts of the yard contain a mature tree and various plantings.

The roof is a high-pitched transverse gable with a combination of hip and gable roof forms on the single storey sections of the house. The roof is clad with glazed terracotta tiles. The gable ends on all sides project a small distance from the wall below and are clad in smaller weatherboards. The south facing gable end features the additional detail of half-timbering in the upper portion. A rendered chimney is located on the south facing gable, it has a flat capped top and two chimney pots.

The lower walls of the subject house are rendered masonry and all upper floors are clad in chamferboard. The porte-cochere is located on the southern side of the building and has large arched openings. The main entry to the house is located under the porte-cochere and features a timber door with glazed panels. Casement windows in single, double or triple arrangements are located around the house and feature leadlight panes with diamond arrangements.

The interior of this residence has not been inspected. Publicly available photography1, including indicative floor plans, have been reviewed. Timber floors are featured throughout. Timber panelled walls are noted in the entry foyer and dining room. Several rooms have ceilings with moulded details. The ceiling of the entry foyer has mock beams. A feature timber staircase leads from the foyer to the upper floor.

The subject house appears to be in good condition and had some alterations and additions including a patio at the eastern end of the building, conversion of the garage to living spaces, changes in painting scheme and the enclosing of the original porch at the western side. The later changes to the landscape are also sympathetic.

during the Interwar period and the growth within the local area that accelerated during the 1930s with the extension of the tram line, when Coorparoo experienced residential subdivision development that reflected the ambitions of the professional classes who sought large comfortable houses with garden settings.

as a largely intact Interwar period residence remaining within much of its original large 1611m² corner land holding and garden setting, complete with driveway and porte-cochere, which is rare in the local context where larger sites have lost much of the related garden setting due to later subdivision and infill development.

as a strong representative example of the Interwar Old English style, with key features including but not limited to the two storey masonry form, half-timbering, roof tiles, transverse gable roof, porte-cochere, and casement windows with diamond leadlight panes. Within this style it retains much of the integrated early garden context, including fence and gate elements as well as the driveway alignment. The alterations to the original garage are sympathetic and easily interpreted.

as a well-designed architectural residence of the Interwar Old English style which remains largely intact. The principal features of the architecture as well as the large 1611m² corner block and integrated garden setting create a strong presentation to the streetscape complementing the overall aesthetic. The interior further emphasises this considered design and includes numerous timber joinery features using a variety of timber species.

as a strong and largely intact exemplar of the residential work of local architect Charles Herbert Griffin in the Interwar period who specialised in adopting and adapting traditional English domestic architecture for affluent clients in Brisbane.

As the home built in 1936 for Henry Roy Hancock, Managing Director of Hancock & Gore timber merchants, which became a prominent Brisbane business and in 1945 was Australia’s largest producer of plywood. Hancock lived at this residence between 1936 and 1954 during this key period of the company prosperity and expansion and the house displays the versatility and attractiveness of timber detailing, both internally and externally.