The Lord Alfred Hotel was opened in 1864 as the Terrace Hotel. Renamed the ‘Prince Alfred’, it was rebuilt in 1881 to a design by renowned architect Richard Gailey. Its original cellars still exist. The hotel is a historical landmark at the entrance to Caxton Street and has had a long association with the nearby military and former police departments.

The block on which the hotel stands was part of suburban allotment 293, a holding of just over one acre purchased by George Bowser in 1861. In April 1864 John Dowling gained title to a 12.25 perch allotment from Bowser’s estate (subdivision 1). He appears to have begun work almost immediately on a hotel, and in September he announced his intention to open the Terrace Hotel as an inn on Petrie Terrace. The hotel was a wooden building with a bar, bar parlour, and five attic rooms for travellers. Dowling’s application for a publican’s licence was evidently refused, but in November 1864 a licence for the hotel was granted to Michael Carrick.

Petrie Terrace, being one of Brisbane’s earliest settled suburbs, was already attracting residents. The first land sales began in 1842 after the closure of the Moreton Bay Penal Colony. The suburb had been on the edge of Brisbane town during the 1840s, hosting only the cemetery. However, its proximity to the central business district and a population boom in Brisbane combined to make the area much more desirable from the 1860s onwards. Houses, shops and a school were quickly built on small, tightly-packed lots. The best residences were constructed along the Petrie Terrace ridgeline overlooking Brisbane Town. Workers’ dwellings filled the hollows of Petrie Terrace. With the opening of the Petrie Terrace gaol and military barracks in the 1860s, there were workers as well as residents to patronise local hotels. Hoteliers made the most of the demand, settling up establishments including the Terrace Hotel, Caxton Hotel, Junction Hotel and Cricketers’ Arms. Most were simple wooden buildings, like the Terrace.

In 1867 Dowling defaulted on his mortgage, and the property was sold to Robert Brady and trustees of the Queensland Building Society. In 1868, when licencee Henry Corbett took over, the hotel was renamed the ‘Prince Alfred’ in honour of the Prince’s Queensland visit. The hotel was one of several ‘Prince Alfred’ hotels established after the Prince’s visit in Brisbane and Queensland, including one at Kangaroo Point (which burned down 1869), at Dalby, at Ipswich; and one in Albert Street in the 1870s.

Robert Brady advertised the sale of stock on trade of the Prince Alfred Hotel ‘fronting to Petrie-terrace, at the rear of the Gaol’ in 1869. The stock included alcohol, billiard equipment, furniture for a parlour, dining and drawing rooms, six bedrooms and a kitchen, and animals, with two horses and 30 chickens. The hotel was advertised to let the following day, along with a four-roomed cottage next door; the cottage, on subdivision 2, had been added to the landholding in 1868. Joseph Adams purchased the property.

The licence for the hotel changed hands frequently in the 1870s and 1880s, and was held by both men and women. Petrie Terrace lacked a public hall before 1884, and the Prince Alfred Hotel made a convenient meeting place for business dealings and social gatherings, including the establishment of a lodge of the Ancient Order of Druids in 1882. Licencees organised groups for outings, and improved the property with stables in 1878. By 1881, however, the hotel was considered ‘rather dilapidated’. New proprietor John Murnane acquired title to the hotel in March 1881. In May, tenders were called for the erection of a stone and brick hotel on the site of the Prince Alfred, by architect Richard Gailey.

By June 1881 work had started on the ‘hotel of a superior class’, estimated to cost £2,000. Murnane funded £1,500 of it with a mortgage over the property. The new hotel was constructed at the beginning of a building boom in Brisbane, which lasted throughout the 1880s. It was also a time when the Licencing Board, as The Queenslander put it, were ‘doing a good work in their efforts to improve the class of hotels in the town and neighbourhood’. The work on the Prince Alfred Hotel appears to have been completed by December, when it was described in local newspapers as a ‘first class hotel’. The new hotel retained its old cellars, though the existence of a tunnel running from the cellars to the Victoria Barracks site has not been verified.

The hotel’s licencee, HM Kavanagh, moved the business to a building across the road while works were completed. When the new hotel opened, he added entertainment to the venue with a bagatelle licence.

The new Prince Alfred Hotel became a landmark of the suburb. Its corner position on the Petrie Terrace ridge contributed to its success, as did the proximity of the barracks buildings. The Petrie Terrace gaol closed in 1883 but was replaced by the police force, while the Queensland Defence Force occupied the barracks site from 1885. The hotel became closely associated with the police and military officers stationed nearby, though this did not prevent occasional thefts and assaults, reported at the hotel in the nineteenth and twentieth centuries.

1887 saw a change in ownership as well as licence holder. Catherine Jorgensen took over the hotel’s licence and was the hotel’s licencee for the following twenty-nine years. Murnane retained subdivision 2, but sold the hotel to the proprietors of the Castlemaine Brewery. The company included eminent businessman and politician George Wilkie Gray, and title passed to him alone in 1888. Gray, who operated import firm Quinlan Gray and Co as well as the Castlemaine Brewery, purchased a number of Brisbane hotels in the 1880s and 1890s, including the Prince Alfred and the Toowong Royal Exchange. His hotels were managed through a lease to Castlemaine Brewery and Quinlan & Gray and Co, who in turn would sub-lease the property to a licensed victualler.

Plans for further improvements and additions to the hotel, undertaken by McCredie Brothers and Chambers, were approved by the North Brisbane Licencing Board in 1890. Licensee Catherine Jorgensen was fined on multiple occasions for unlawfully providing liquor on Sundays, and was eventually refused a licence in 1906.

In addition to its military connections, the hotel was a regular venue for celebrations for the Roma Street railway workers in the early twentieth century. Other patrons were attracted to the hotel by a small commercial precinct which had developed around the hotel, along Caxton Street and Petrie Terrace. The continued growth of Petrie Terrace’s residential population also provided customers for the hotel. A singing and music licence added to its appeal and value.

The hotel’s proprietor George Wilkie Gray died in 1924. In July 1925 the hotel was passed to Castlemaine Brewery and Quinlan Gray and Co, along with Albion Hotel, Sportsman’s Hotel, Royal Exchange and Woolloongabba Hotel. A number of architectural firms were engaged to design alterations to the Prince Alfred Hotel both before and after the sale, including Hall and Prentice, Addison and Sons. It is unclear whether any of the alterations were completed.

The hotel continued to serve local residents and workers through the twentieth century. Castlemaine Brewery gained title to the adjacent allotments, subdivisions 2 and 3, in 1927 and 1977 respectively. Further alterations took place in the 1950s and 1980s. Castlemaine sold the hotel in 1986, and it has since passed through a number of proprietors. At time of writing (2015) the hotel continues to operate as Hotel LA.

The former Lord Alfred hotel is a two storey plus part basement rendered brick building on the corner of Caxton Street and Petrie Terrace in Petrie Terrace. It has a hipped roof clad with corrugated metal sheets. A wraparound first floor verandah cantilevers over the footpath, which is not original or of cultural heritage significance. The street elevations do not retain early detailing. The basement has stone walls and retains some early fabric and layout. The other levels are highly-altered. The rear includes many extensions from a number of periods, which are not of cultural heritage significance.

as an 1881 hotel with an 1860s cellar and reported tunnel to the former Petrie Terrace Barracks.

as part of the opus of Richard Gailey-designed hotels in Brisbane. 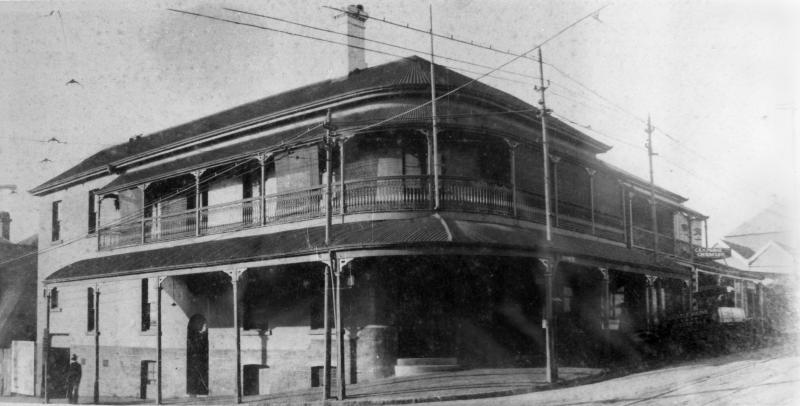 Situated on the corner of Petrie Terrace and Caxton Streets, the Prince Alfred Hotel dates from 1872, when D. Hyland became the first licensee. The original building was wooden and was presumably replaced by this building in the late 1880s.
(Description supplied with photograph)