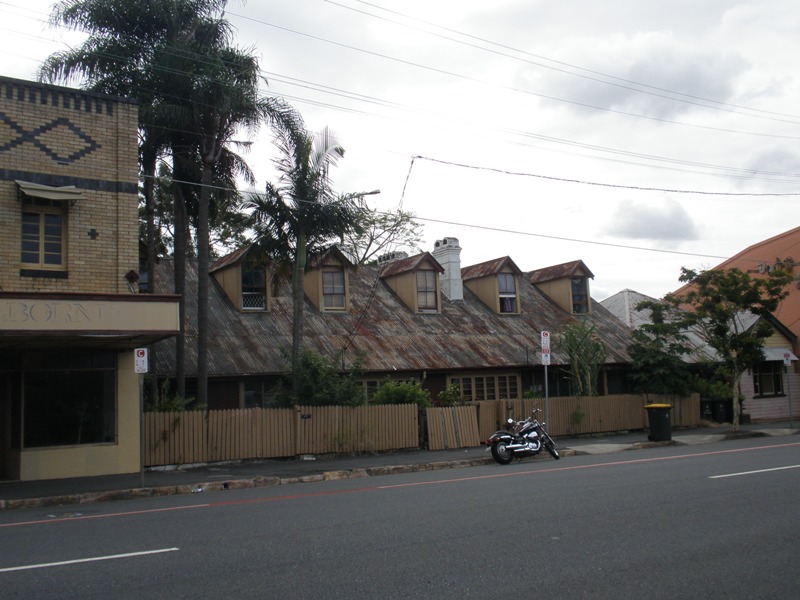 ‘Princess Row’ was built in 1863 for chemist, grocer and property investor William John Costin. The brick cottages were probably designed by James Cowlishaw, an eminent Brisbane architect, who undertook other work for Costin. Originally known as ‘Costin’s Cottages,’ they were leased to a series of tenants, they later became known as ‘Princess Row’. A shop was added to the front of the residence on the corner of Princess Street in 1929. ‘Princess Row’ is a rare surviving example of terrace houses constructed in the 1860s along the newly-developing Petrie Terrace.

The land on which Princess Row stands was part of a site of over two acres sold to Joseph Baynes in 1861. Baynes’ landholding was known as ‘Baynes’ Paddock,’ but the bucolic environment suggested by the name did not last long. Petrie Terrace, then called ‘Green Hills’ had been on the outskirts of Brisbane Town and home only to the cemetery since the closure of the penal colony, but in 1861 the area was on the cusp of significant development. The town goal and military barracks were erected along the terrace in the early 1860s, bringing officers to the area. Commercial and residential growth quickly followed. Petrie Terrace was within walking distance of the town, which, in the absence of reliable transport, increased its residential appeal. Large and grand residences were built on the terrace itself while workers’ cottages were constructed on the hills sloping down towards the former cemetery.

Baynes’ Paddock was subdivided, sold and developed shortly after Joseph Baynes’ purchase. In 1863, a 31 perch site in the paddock was sold to William John Costin, a Queen Street chemist and grocer. Born in 1838 in Sydney, Costin arrived in Brisbane circa 1854 and set up work as a chemist in 1855. He took up property investment in the 1860s, advertising numerous allotments for sale in and around Brisbane. In 1861 Costin engaged architect James Cowlishaw to design his first chemist and grocery store on Queen Street. He also had substantial buildings constructed as investment properties: a commercial building in Queen Street and this residential one on Petrie Terrace.

It is probable that architect James Cowlishaw designed Costin’s Petrie Terrace cottages. Cowlishaw, considered Brisbane’s ‘first successful private architect’, was responsible for the design of a number of early Brisbane buildings, including the Port Office Hotel [600098], Harris Terrace [600121] and Middenbury [600330]. In March 1863 Cowlishaw called for tenders for the erection of four brick cottages on Petrie Terrace. In addition to Cowlishaw’s earlier work for Costin, the architect was then also designing Costin’s commercial building on Queen Street. This was finished in 1863, and it seems likely that Cowlishaw’s Petrie Terrace brick cottages were also designed for Costin.

The brick cottages were not designed as detached dwellings, as most Brisbane residences were, but as a terrace. Terrace houses were relatively rare in Brisbane, and when built were generally limited to Brisbane city and the innermost suburbs like Spring Hill and Petrie Terrace. Only three terrace houses survive from the 1860s: Athol Place in Spring Hill (QHR 600167), Harris Terrace, George Street (QHR 600121) and Costin’s brick cottages.

The brick cottages drew some attention. The progress of work on the cottages was reported in June 1863, when the Courier mentioned that they would be ‘ready for occupation in about two months.’ (Courier 18 June 1863 p2) ‘Mr Costin’s building’ was used as a reference point by September 1863, and rental advertisements for the property began in October. Costin’s Cottages, ‘pleasantly situated on the Green Hills’ were marketed to wealthy tenants. As well as being on Petrie Terrace, rather than the slopes, they were described as ‘neatly finished gentleman’s villa residences’ and each had a servant’s room. The property had frontage to the popular Petrie Terrace, a slightly longer frontage along Princess Street, and rear access via a back lane, now Ormonde Street.

A lack of post office directories from the 1860s makes it difficult to identify early tenants of the cottages. Brisbane’s population had more than doubled between 1861 and 1864, suggesting there was no lack of demand for the property. Costin himself was an early resident, relocating from Queen Street with his family. Donald Cameron was believed to run the Brisbane Grammar boarding house from there from 1869, though this has not been substantiated.

Costin mortgaged the cottages in 1864 and 1866, for the substantial sum of £2600, suggesting financial difficulties. Although his Queen Street building was spared from a major fire in 1864, it was badly damaged in another blaze in 1866, and Costin’s insolvency followed soon after. In the insolvency hearing he stated that the cottages were built ‘for his mother’s benefit by him out of his own money,’ though they were not ever transferred to his mother. In 1870 the cottages passed to Henry Jordan, the mortgagee of the cottages. Jordan, a retired parliamentarian and immigration agent, leased the ‘Petrie Terrace Cottages,’ though he briefly resided in one in the late 1870s.

The four brick and stone cottages were advertised for sale in 1879. The ‘choice and extensive’ view was emphasised, as well as the ‘healthy’ position, helped along by the park across the road. It was also served by buses, as well as being ‘a few minutes’ walk from Queen street’. The name ‘Princess Row’ also emerged around this time.

The terrace was transferred to August Bernecker in 1881. Bernecker advertised the ‘well-known block of houses’ for sale in 1884 but retained the property until his death in 1907. Management of Princess Row was mostly left to its tenants, who sublet the terraces from around the 1880s. Women ran boarding houses from the cottages, catering to a diverse collection of residents, including drapers, bricklayers, railway porters, bootmakers, and the Inspector of Mines. The boarding house keepers highlighted the property’s favourable position overlooking Hardgrave Park, which was gazetted in 1875. From the early twentieth century transport workers were targeted as tenants, with advertisements noting the property’s proximity to the Countess Street tram-shed and railway station. Later advertisements described the composition of each tenement, which included four rooms on the ground floor and two attic rooms.

Princess Row was sold in the early twentieth century and held by non-occupants. In July 1929 Princess Row was transferred to Ah Tim, who had plans approved for a shop on the corner of Princess Street, fronting one of the cottages. He also had a garage built on the Princess Street frontage. JD English and sons constructed both additions, the shop at a cost of £1,620. From 1930 the shop was run by Arthur King Koi, whose South Brisbane shop and dwelling had been resumed for the Grey Street bridge in 1926. Ah Tim transferred the dwellings and shop to King Koi in 1937. The shop was known locally as the ‘Chinaman’s shop’, and the King Koi family coordinated charity drives for Chinese refugees from the shop through the twentieth century. King Koi owned the property until his death in 1979. Princess Row was transferred to its current owners, the Terrace City Unit Trust, in 2012.

Princess Row is a row of 4 terraces fronting east onto Petrie Terrace in Petrie Terrace. The southern end terrace is on the corner of Princess Street and the row has a rear access from narrow Ormonde Street. The terraces have a stone part basement, a ground floor with rattrap bond brick walls, and a habitable timber-framed attic level in the steep gable roof. The roof is clad with corrugated metal sheets and gabled dormer windows project from it to the front. These are clad with sheets and battens and have double hung sash windows that are not original. The terraces retain brick chimneys with rendered mouldings.

Each terrace has small front gardens except the end terrace which has a two-storey facebrick shop extension in its place. The other terraces have a narrow front verandah – enclosed by later material and windows that are not of cultural heritage significance. The interiors are very intact, retaining original layout and much original fabric, including: original timber floors and outstanding joinery (doors, windows, skirting, fireplace surrounds, narrow stair to the attic), which is rare; and rendered masonry partitions on the ground floor and very wide timber board lined partitions in the attic. An enclosed rear verandah accommodates a kitchen and bathroom with an external rear timber stair down to the basement and back yard. There is no vegetation of cultural heritage significance.

The shop is facebrick in running bond with decorative dichromatic treatment, including a diamond pattern and corbelling. The shopfront is tiled in black and red gloss subway tiles and has large show windows and a central recessed entrance. This is sheltered by a top hung footpath awning. The first floor has casement windows. The shop interior is somewhat intact. The rear wall opens into the terrace behind.

as a row of terrace houses built in 1863 when the fringes of Brisbane Town were experiencing a development and population boom. The addition of the shop in 1929 reflects their ongoing use and the interwar rend of self-contained accommodation.

as 1860s terrace houses with an interwar shop.

as 1860s terrace houses with an interwar shop attached.