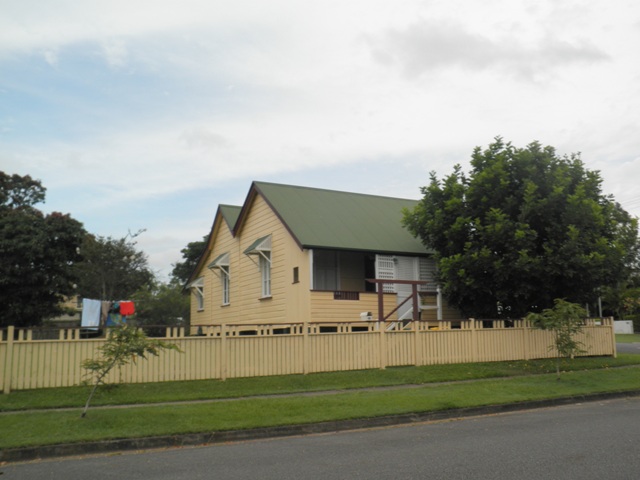 This lowset timber and tin cottage was built for Peter Forster in the mid 1890s and formed part of the Forster family’s dairy farm that fronted Old Cleveland Road. The Forster’s may have used this residence as a rental property or workers' quarters for the first couple of decades while Ashton Street was developing. The house is now one of the last surviving nineteenth century residences in Camp Hill and was still owned by the Forster family into the twenty-first century.

The site on which this cottage was built was originally part of a crown land purchase made by Andrew Holden on 29 December 1859. Holden, a resident of Cleveland, paid ₤46.5s.0d for 46 acres and 1 rood of land described as Portion 119 in the parish of Bulimba. Holden’s purchase was in that part of Bulimba parish that became known as Camp Hill. Camp Hill gained its name because it became an overnight rest spot for those farmers, bullock drivers and other travellers who journeying to and from Redland Bay, Cleveland and Mt Cotton and Brisbane Town in the early days of Queenslands history. The district around Camp Hill and Carina once was a strong German community and consisted mainly of vineyards and dairy farms. The district remained predominantly German until the speculation land boom of the 1880s, when many farmers sold their land. This land boom was further stimulated by the construction of the Cleveland rail line in 1888.

Thus Andrew Holden subdivided his undeveloped land and then resubdivided again such that resubdivision 2 of subdivision 1 of Portion 119 was sold to Peter Forster on 28 April 1887. Peter Forster (sometimes spelt as “Foster” in the Queensland Post Office Directories) was a farierer or blacksmith, who was living at Coorparoo at the time that he purchased the 19 acres, 3 roods and 4.6 perches of land from Holden. Peter Forster only held this land for just under a year before he sold it to Joseph Francis Oberthur on 28 February 1888.

Joseph Oberthur was a German migrant, a plumber and resident of Coorparoo. He wanted to profit from the 1880s land boom so he purchased various blocks of land fronting Ashton, Mary and Francis Streets to create the Oberthur Estate. The estate was considered to be part of Coorparoo at this time. This suburban estate was first marketed in 1888 with Oberthur himself living in Ashton Street for a period. Unfortunately the Oberthur Estate was not highly successful. Joseph was forced to take out various mortgages on the estate’s land during the late 1880s, such that he became insolvent in 1892. Yet by the 1890s, Ashton Street was the most densely populated street on the outskirts of Coorparoo (Camp Hill).

Another major buyer of land in the Oberthur Estate was German migrant and carpenter Carl Bleck. It was Bleck who purchased the land that became 38 Ashton Street. On 23 May 1889, he obtained subdivisions 20 and 21, totalling 32 perches. He followed this by buying subdivisions 18 and 19 on 11 July 1889. Then on 18 November 1889, Peter Forster purchased subdivisions 20 and 21 off Bleck. It is possible that Bleck (also known as Carl Black) built the simple cottage at 38 Ashton Street before he disposed of the property to Peter Forster. Carl is listed as a resident of Ashton Street in the 1891 and again in the 1894-95 edition of the Queensland Post Office Directories. But he was probably living in a house built on subdivisions 18 and 19, as at that time the land at 38 Ashton Street was owned by the Forster family. Certainly the 1895-96 edition of the Queensland Post Office Directories shows that a vacant house existed close to the site of 38 Ashton Street and therefore it is assumed that this cottage had been built by 1895.

Peter and George Forster already owned the land that is now 18 Ashton Street and they built the family home “Fulda” at that address in 1890 as he is first listed living in Ashton Street in the 1891 edition of the Queensland Post Office Directories. The name “Fulda” originates from the River Fulda in the Hesse district of Germany. The Forster family farm “Rosebank Dairy” fronted Old Cleveland Road. Subdivisions 20 and 21 were added to the farm and the land was passed between various members of the Forster family over the next few years. Blacksmith Andrew Forster gained ownership of the land on 23 April 1896 and he passed it to Henry William Forster on 13 December 1907. On that same day, Henry Forster mortgaged the land at 38 Ashton Street. He borrowed ₤100 from James Eagle Knight and it is possible that this money was used to extend the simple cottage on the site. It is thought that cottage at 38 Ashton Street was a used by the Forster family as a rental property or a quarters for a dairy workers as the Queensland Post Office Directories list the names of many different residents of the cottage until 1909.

With the arrival of the tramline to Coorparoo in 1915 and its extension to Camp Hill in 1925, the area attracted more residents. Oberthur Estate grew rapidly and by 1923 most of the land was sold or developed. On 20 May 1916, part of what was formerly known as Faust’s paddock (a dairy) was auctioned as “67 charming sites”. This estate was on the crest of the hill and within six minutes of the Coorparoo tram terminus and twelve minutes from both the Coorparoo and Norman Park railway stations. Henry Forster married Maria (Mary) Amelia Forster and her name was added to the title deeds on 30 April 1919.

On 26 March 1930, Henry Forster died and 38 Ashton Street passed to his widow Mary Amelia Forster who continued to live at the cottage with her son William. That same year Bovelles Street was dedicated as a road.  By 1938, most of the Forster’s “Rosebank Dairy” had been sold off as residential blocks and Ashton Street was lined with houses. The 1946 aerial photograph of Camp Hill shows that 38 Ashton Street was surrounded on three sides by houses and on the fourth by Bovelles Street. On 26 April 1955, Mary Forster died and her estate passed to three family trustees – Eileen Mary Forster, William Lawrence Forster and Matilda Elizabeth McQueen, the wife of Arthur Edward McQueen.

Eileen Forster was a spinster and so the other two trustees transferred their shares of the property to Eileen. She became the sole owner of 38 Ashton Street on 26 April 1957. The current owner of the Forster’s Dairy Cottage, James Vincent Forster gained the title deeds on 18 June 1976.

This cottage is one of the few surviving nineteenth century residences in Camp Hill. As the surviving remnant of a local dairy it is important in demonstrating the pattern of development of the area.