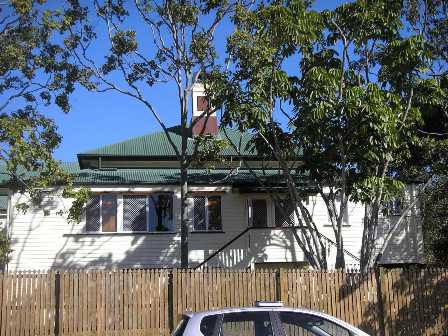 ‘Yalcongreen’ was constructed circa 1895 for the Metropolitan Freehold Land and Building Company who rented out the large residence. William Comfort began renting the house in 1900 and together with his wife Edith, purchased the property in 1922 after more than 20 years of renting. In the early 1950s the house was converted to flats, which was common for large residences at this time in order for them to take advantage of the housing shortage caused by the postwar population boom.

The land containing “Yalcongreen” was originally part of a crown land purchase made by August Dimper on 10 March 1864. Dimper paid ₤88 for 88 acres of land described as Portion 123 in the Parish of Bulimba. Dimper subsequently subdivided the land. On 19 April 1866, a new title was issued to Dimper for Subdivision A of Portion 123, comprising 25 acres, 2 roods and 38 perches of land. Dimper mortgaged the land on 12 May 1868. He obtained a loan of ₤75 from Carl Tohallhms.

Valentine Hesse, a resident of Bulimba, bought the property on 20 March 1872. He also subdivided the land though he only lost 8 perches from his purchase. A new title for Resubdivision 1 of Subdivision A of Portion 123 was issued to Hesse on 22 September 1887. At that time, Hesse was listed as a resident of Coorparoo. Unfortunately, the editions of the Queensland Post Office Directories that were published between 1874 and 1887, show no listing for Valentine Hesse.

On 3 November 1887, Hesse sold the property to the Metropolitan Freehold Land and Building Company, This land-development firm subdivided Hesse’s land into suburban blocks in preparation for a land sale. The company created the Croydon Park Estate that offered house blocks for sale along Bennett’s Road and Macdonald, Watson and Lloyd Streets. Auctioneer G.T. Bell conducted a land auction on 17 December 1887 but the first block was not sold until 27 March 1888.  Subdivisions 105 to 109 plus subdivision 112, on which “Yalcongreen” was placed, were not sold until 26 June1922, when Edith Margaret Comfort purchased the site. She was the wife of William Edward Comfort.

But “Yalcongreen” had already been built by the time that William and Edith Comfort bought the property. This residence is first listed as a postal address on Bennett’s Road, Coorparoo in the 1896-97 edition of the Queensland Post Office Directories. Harold Barraclough was listed as the person living at “Yalcongreen” at that time. In the following (1897-99) edition of the Queensland Post Office Directories, the residence is listed as vacant. Then in the 1900 edition, William Comfort is shown to be the new resident.

It would appear that the Metropolitan Freehold Land and Building Company built “Yalcongreen” circa 1895, as a rental property. William and Edith Comfort would have been tenants until 1922, when they were finally able to afford to purchase their home. They had acquired the house plus 2 roods and 25 perches of land. On 10 December 1923, they disposed of Subdivision 112 to Martin Burke. This left them with 2 roods and 9 perches of land. On 15 September 1950, the Comforts further reduced their land holdings by selling Subdivision 109 to James Francis McCann. During the 1930s, the Comforts further subdivided their land in preparation for a land sale. A 24-perch block described as Resubdivision 2 of Subdivisions 105-108. A 1938 sewerage map of Coorparoo identifies the Comfort’s residence as “Yalcongreen”.

“Yalcongreen” finally passed from the hands of the Comfort Family on 4 July 1945, when William David Ramage purchased the property. On 30 June 1952, the Brisbane City Council granted Ramage permission to convert “Yalcongreen” into flats. The Queensland Housing Commission currently owns the property. The Brisbane East Branch of the National Trust of Queensland identified it as a place of local heritage significance.

as evidence of the residential development of Camp Hill in the 1890s; and, as a house that was converted to flats during the 1950s in line with changing accommodation requirements caused by the postwar population boom.

as a good example of a large, nineteenth century house in the Camp Hill area.