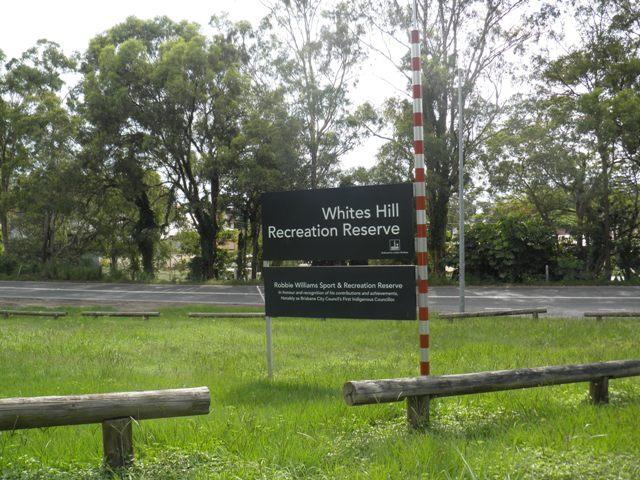 White’s Hill Reserve is a popular sports and informal recreation venue in the southeast of Brisbane. The summit of White’s Hill (120m), is a vantage point affording the residents and visitors of Brisbane expansive views across Brisbane and beyond. The views are now screened by the regrowth of trees that had been cleared during the time that the White’s Hill Kiosk was operational. It was not until 1925 that the locality was called Camp Hill. In the early days of settlement, Camp Hill was a waterhole resting place for teamsters and other travellers on the trip between Brisbane and Cleveland. From the mid-1850s, Camp Hill was settled as small farms, dairies and vineyards and included a strong German community. Many farmers had come out as assisted immigrants and had been allocated land grants or paid two shillings and sixpence per acre (0.4 hectares) for selections. Many of these properties were sold off during the 1880s land and housing boom when much of the Camp Hill land was subdivided by entrepreneurs.

In 1863, Robert White and his wife emigrated from England on the SS Indus arriving in Maryborough and then moving on to Red Hill in Brisbane. Arriving in Brisbane, White was keen to secure a hilltop property but by this time most of the Brisbane hilltops were occupied. He looked to the south side where already the Hollands had Holland Park and the Galloways occupied Galloway’s Hill. In 1873 he purchased 43 acres in the Camp Hill area on the last remaining hill in the south of Brisbane. The hilltop selected by White was probably still available because it was too steep for grazing and too poor for farming. There was no water and the soil was rocky but White was impressed by the view it afforded.

A carpenter, he worked as a joiner for prominent early settler and building contractor Andrew Petrie. Each day White travelled 11.3 kilometres (seven miles) into Kangaroo Point to catch the ferry across the river to Petrie’s workshop at Petrie Bight. White improved his selection, constructing a slab hut with a shingle roof for his family about halfway up the slope on the northern side of the hill together with a milking yard and piggery. On the western boundary near a Bulimba Creek tributary he was growing maize on three cleared acres enclosed with a three-rail split timber fence by October 1879. He built a sawmill near a reedy swamp now known as Eric Sivell Park to mill the timber in the area using water from the swamp. With axe, pick and shovel White dug out a road to the top of the hill where he constructed a substantial house with wide verandahs. The house was built for the views with a round living room that afforded dramatic views to Ipswich, out over the City and across to the sandhills of Moreton Island. The dining room could seat 50 to 60 people and was warmed by a large stove imported from England.

Sightseers began to visit the house, so the White family began providing refreshments and installed telescopes to enhance the appreciation of the vistas afforded. On a clear day through the telescopes it was possible to read the time on the Central Station clock. The house/kiosk soon became a popular venue for picnicking, dancing, weddings and parties and guests danced to music provided by a German music machine. In addition to the telescopes, a camera obscura was installed to take in the views. White built a tower at the northern end of the building and the camera obscura periscoped through the roof. The camera ranged through 360 degrees and projected views onto a circular table on the lower level. The projected view could be viewed from a circular mezzanine viewing platform within the tower reached by a narrow spiral stairway.

Visitors came by horse drawn vehicles, caught the Belmont Flyer to City View Station and walked or took the tram to the terminus at the corner of Chatsworth and Upper Cornwall Roads where a sign indicated that it was a 20-minute walk across the paddocks to White’s Hill.

An advertisement appearing in the Daily Mail in 1906 stated that White’s Hill was one of the best hills within easy access of the City from which a panoramic view of Brisbane could be obtained. Admission to the grounds was 6d for adults and 1d for children and access to the camera obscura was 6d. During the 1920s White’s Hill was more popular than Mt Coot-tha as an excursion destination.

The trees around the house were cleared or trimmed to facilitate clear views. One large ironbark tree near the house was retained and food was thrown around it to attract birds, the scene providing an attractive view from the camera obscura. The telescopes were used by the family to look across the scrub to the open paddocks of Greenslopes and count the picnickers coming off the tram. This helped with preparing pots of tea and batches of scones in anticipation of their arrival.

The White property was fenced and a drive travelled through the site to the summit where there was some terracing of the land. The remainder of the site was overrun with thick undergrowth.

I have given the whole of the question much thought and consideration and am satisfied that, not only in the interests of the citizens of today, but more especially of the future, we should not lose the opportunity of retaining all these beautiful spots around Brisbane. … If this policy were adopted, I have no hesitation in saying that Brisbane will rank as one of the best provided for cities in the Commonwealth in so far as open spaces and points of vantage are concerned. … The whole of the areas above described lie within the radius of 4 miles of the City proper and it should not be difficult to arrange transit facilities so as to give the public the maximum benefit of their existence.

In this Mayoral Minute, in reference to White’s Hill Jolly states that

This property (43 acres) is owned by Mr White and at present is, to a great extent, availed of by the citizens as a pleasure ground. I would recommend that steps be taken to negotiate for the acquisition of the whole of this area at an early date, as it would indeed form a very valuable asset to the City.

The provision of additional breathing spaces and the acquisition of vantage points on the ranges and hills around the City was pursued by Jolly with considerable vigour. In the drive to secure the vantage points around Brisbane for public use, 405 hectares (1000 acres) were added to Mount Coot-tha Park and Whites Hill and Mount Gravatt were acquired. Eildon Hill and Bartley’s Hill when taken over from the metropolitan Water Supply and Sewerage Board in 1928 were also laid out as vantage points.
In 1924 Robert White declined an offer of £22,000 for the site and in 1928 the Brisbane City Council purchased the property and various improvements and chattels for £8,826. The adjacent Sankey’s paddocks were used for grazing and were acquired by the Brisbane City Council in 1931. This land was a rubbish tip until 1993 when it was redeveloped as sporting fields and picnic areas. A number of resumptions occurred between 1934 and 1960 extending the White’s Hill Reserve holding. Resumptions included a parcel of land of 104.4 hectares (258 acres) owned by J.R. Sankey which was acquired in settlement of rates arrears in 1934.

Major J.R. Sankey was a partner in the Brisbane jewellery store Flavell, Roberts and Sankey. In 1868 the first gold of the Gympie Gold Rush was weighed in their shop. Sankey owned 160 hectares (395 acres) to the southeast of White’s Hill and near Pine Mountain.

During the Second World War the army used White’s Hill as an observation post and the surrounding bush for practice manoeuvres. Vandals so damaged the White’s kiosk that the Council demolished it sometime later. In 1964 the Brisbane City Council subdivided 125 acres around the lower slopes and sold the land for residential development but this did not include the White property which was developed as a park. In 1997 a bandstand was constructed down on the flat south of White’s Hill about 300m from the site of the earlier White’s Hill Kiosk.

Development of sports fields across the Reserve began in 1968-69 and a number of sports and community organisations now enjoy facilities within the park reserve.

White’s Hill Reserve covers an irregular wedge of land of approximately 172 hectares bounded by Boundary Road to the west, Pine Mountain Road to the south and residential properties to the east and north. The Reserve accommodates sporting fields, a quarry, a water reservoir and large areas of remnant bushland. Sportsfields and facilities have been developed for the playing of soccer, cricket and touch football. A play area, memorial gardens for Ted Hoare, a bandstand and a war memorial occupy ground between the soccer and touch football areas.

White’s Hill (120 metres high) is the westernmost peak of a ridge that starts at Pine Mountain. The hill slopes are mostly covered with open eucalypt forest of spotted gums, grey gums and narrow leafed ironbarks, with an understorey of grasses and shrubs. A lookout shelter has been constructed on the summit on the site of the earlier White‘s Hill Kiosk. A bitumened path edged with rounded concrete blocks winds around through the bush to the summit. Other paths winds through the bushland of White’s Hill and Sankey Hill.

Sankey’s scrub, a small pocket of dry rainforest, is located in the southeast of the reserve. The scrub shelters a number of rare or uncommon rainforest plants.

A brief inspection of the area indicates that the Reserve is in a satisfactory condition.

as a popular vantage point for views across Brisbane since the late 19th century.

as a hilltop with grassed and treed slopes forming a green backdrop to the surrounding suburbs.

as a place of informal recreation with walking tracks and vantage points affording expansive views across and beyond Brisbane.

as a vantage point secured for the citizens of Brisbane by William Jolly during his term as first Lord Mayor of Greater Brisbane.