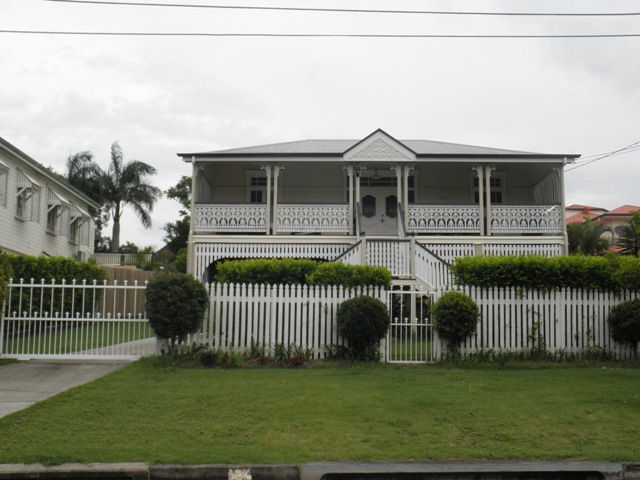 17 Bovelles Street was built ca. 1925 under the Anzac Cottage Scheme, an initiative of the Queensland War Council under the sub-committee named the Anzac Cottage Trust. Its directive was to establish homes for widows and their dependants of enlisted men killed in the First World War. Construction of the homes was funded by the Queensland Lottery, ‘Golden Casket’, and they were built using volunteer labour. Only thirty-eight Anzac Cottages were built in Brisbane, many of which no longer survive. 17 Bovelles Street is important as a rare surviving example of an Anzac Cottage in Brisbane.

The land on which ‘Fairfield’ was constructed was acquired by the Queensland Government’s War Service Homes Commissioner on 24 June 1920. The Commissioner obtained 15 acres, 3 roods and 28 perches of land, described as subdivisions 5-9 and subdivision B of resubdivision 4 of subdivision 2 of Portion 119, from widow Caroline Isabella Bowman. She had held the undeveloped acreage since 1888.

The War Service Homes Commissioner had the land subdivided into housing allotments and these were gradually sold-off during the period from 1925 through to 1969. These allotments were incorporated into a new housing estate called ‘Coorparoo Heights’ Estate. But one block, being Lot 26, was retained by the Commissioner for the purposes of erecting an Anzac cottage for a disabled returned serviceman and his family. This Anzac cottage was built around 1925 for returned soldier, Private James Percival Styles who gained the deed of grant to the property on 30 July 1927.

Private James Styles (service number 5193) enlisted in the Australian Imperial Force (AIF) on 19 October 1915. He became a member of the 49th Battalion AIF, which was raised in Egypt on 27 February 1916. Approximately half of its recruits were Gallipoli veterans from the 9th Battalion, and the other half-trained reinforcements from Australia. It can be assumed that James would have been among these new reinforcements after having completed training in Australia. The 49th was predominantly composed of men from Queensland. The battalion became part of the 13th Brigade of the 4th Australian Division.

Arriving in France on 12 June 1916, the 49th moved into the trenches of the Western Front for the first time on 21 June. It fought in its first major battle at Mouquet Farm in August and suffered heavily, particularly in the assault launched on 3 September. The battalion saw out the rest of the year alternating between front-line duty and training and labouring behind the line. This routine continued through the bleak winter of 1916-17.

Early in 1917, the battalion participated in the advance that followed the German retreat to the Hindenburg Line, supporting the 13th Brigade’s attack at Noreuil on 2 April. However by 4 May 1917, James Styles had returned to Australia. Without consulting James personal records, it can only be assumed that in the New Year Styles was wounded and discharged upon return to Australia.

After his return from Europe Styles resided at a boarding house at 18 Turbot Street, Spring Hill. From 1923 he is listed as living in Brunswick Street, New Farm. The first mention of Styles living in Bovelle Street is in the 1926 edition of the Queensland Post Office Directory. At that time, Bovelles Street was considered to part of Coorparoo.

In June 1923 the Queensland War Council decided to use the balance in the ‘Anzac Cottage’ fund to build ‘TB’ homes. TB homes were intended for returned soldiers and sailors suffering from tuberculosis and were rented at of 8/- per week. It is not known where the idea for Anzac Cottages first came from but they appear to have been built as a community response to the losses sustained during the First World War. Many were built on donated land with volunteer labour. Only married serviceman who did not own or were not buying a home were eligible and they were required to be members of the TB Sailors, Soldiers and Airmen’s Association of Queensland.

Homes were designed and built under the auspices of the Workers’ Dwelling Branch and were of a standard type, different to Anzac Cottages, costing around ₤600. The Public Trustee managed them in a similar way to Anzac Cottages. By October 1924 nine homes had been built, with 17 Bovelles St being one of this number.

The design of the TB house shared similarities with precut homes produced by firms like Campbell’s and particularly Brown & Board. Both firms were recorded as supplying materials to the Anzac Cottage scheme and produced designs which conformed to the requirements of the Workers Dwelling Act.

An October 1938 sewerage detail map shows the house identifies as ‘Fairfield’ with a section of it’s verandah enclosed. In 2004 this verandah has been reopened.

17 Bovelles Street is important in demonstrating the pattern of Brisbane's history, built under the Anzac Cottage Scheme to provide accommodation for the families of Queensland enlisted soldiers or sailors who died in the First World War. These houses were funded with the proceeds of the Queensland lottery, draws three, four and five.

as a rare aspect of Brisbane's cultural heritage as one of only a few surviving Anzac Cottages, built under the Anzac Cottage Scheme.