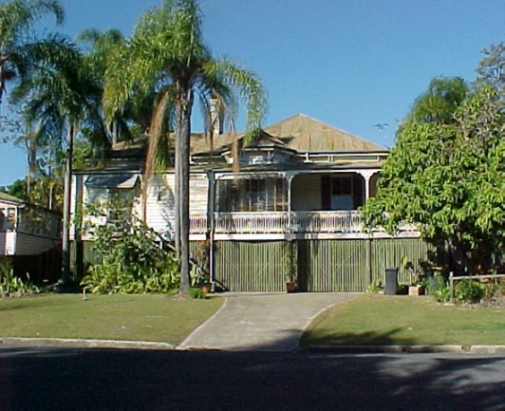 This high-set timber residence was constructed in 1887 for government surveyor and local dignitary John Smith Bennett and his family. In 1916, Bennett was elected member of the Coorparoo Shire Council and in 1919 was elected Mayor. He was also a prominent member of the Methodist community and was involved with the establishment of a local Methodist church group. In 1918, Bennett subdivided his landholdings around the property into a small estate and named the surrounding streets, including Ethel Street, after members of his family, further demonstrating their connection to the Camp Hill area. This house is one of a small number of surviving nineteenth century residences in Camp Hill.

The site containing this residence was originally part of a purchase of crown land made by Peter Schick and Peter Klupfel on 21 May 1859. The two partners, who were residents of Brisbane Town, paid ₤64.15.0 for 64 acres and 3 roods of uncleared land described as Portion 122 in the Parish of Bulimba. On 25 February 1865, with his partnership to Schick dissolved, Klupfel gained sole ownership of Portion 122. During this process his land had been subdivided so that Klupfel’s land holdings were slightly reduced to 32 acres, 1 rood and 20 perches. Peter Klupfel had moved to Cleveland Road (later renamed Old Cleveland Road) by this time where he established his property “Rose Farm”. On 22 April 1865, Klupfel mortgaged his land. Klupfel was able use the land in order to borrow ₤100 from John Redford Fox.

On 2 July 1866, Klupfel disposed of the land to Issac Bennett, of Brisbane. Bennett had acquired that part of “Rose Farm” where Cleveland Road met an unnamed government road. This government road would eventually be known as Bennett’s Road because of its proximity to Bennett’s land. On 9 July 1866, Bennett mortgaged his new land purchase. He was able to raise ₤250 with his creditors being John Petrie, Henry Buskley and Theopolis Parsons. By the time of the publication of the first edition of the Queensland Post Office Directories in 1868, Bennett was listed as a Brisbane resident. This indicted that he had not moved out onto his land at Camp Hill. Instead, Bennett used the land for investment purposes. He obtained a second mortgage on 12 November 1869. This was for ₤100 financed by Davis Layson. In the 1874 edition of the Queensland Post Office Directories, Bennett is shown to have moved out to One Mile Swamp (now Woolloongabba). His occupation is listed as a clerk working at Vulture Street, South Brisbane. Bennett took out a third mortgage, on the land, on 20 May 1876. He was able to borrow ₤500 from David Langland Brown.

On 7 December 1882, Issac Bennett disposed of the land to John Smith Bennett and William Fryar who was the brother of J.S. Bennett’s wife. The two men divided the land into two allotments, each of which contained 16 acres and 30 perches of land. They both received the new title deeds to their land on 15 March 1883. Bennett took out a mortgage for ₤440 on his land on 20 May 1884. It was possible that this loan was used to pay for the erection of a new residence on the highest point of Bennett family’s land. John S. Bennett first appears as the owner of a residence on Old Cleveland Road, Coorparoo in the 1888 edition of the Queensland Post Office Directories. As these directories were researched in the year prior to publication, then it can be assumed that Bennett constructed his house in 1887. Initially named “Rosefarm” as a tribute to Klupfel’s old farm, Bennett’s residence was first referred to as “St Helens” in the 1895-96 edition of the Queensland Post Office Directories.

Born in 1850, John Smith Bennett had married Emily Ann Fryar on 10 April 1878. At the time of construction of this residence in 1887, Bennett was employed as a clerk in the Queensland colonial government’s Department of Public Lands. A licensed surveyor, Bennett became an important local dignitary. In 1885, he attended a meeting of Methodists who were residing within the Coorparoo district. This meeting resulted in the formation of a Methodist church group in the area. A Wesleyan Methodist church building was erected in the following year and Bennett was appointed as one of the trustees. On 12 June 1916, Bennett was elected as a member of the Coorparoo Shire Council, a position he held through to 1919. In that year, he was elected Chairman (ie. Mayor) of the Coorparoo Shire Council.

On 16 June 1916, Bennett was issued with a new title deed to his land. This showed that the size of his block had been reduced to 16 acres and 18.8 perches. In 1918, Bennett subdivided his land to create a small housing estate. A number of new streets were created for Bennett’s new estate. Cyril Street was named after his son, Cyril Fryar Bennett who was also a surveyor. Ethel Street was named after his daughter, while Madeline and Audrey Streets were named after his granddaughters. Bennett retained 1 acre and 18.8 perches of land, which included “St Helens”. The first of this new house block was sold on 9 January 1919 to Rupert Lindley Wragge. The remaining blocks were sold off during the period 1919 to 1923.

Bennett’s wife, Ann died on 23 August 1920 at the age of 62 years. Bennett only retained ownership of his residence for another three years. He transferred the property to Rupert Wragge and Lindley Herbert Musgrove Egerton Wragge on 8 February 1923. John Smith Bennett (age 79) died on 20 January 1929 and he was buried next to his wife at Bulimba Cemetery.

The Wragge brothers bought “St Helens’ for their mother, who had been the wife of controversial Queensland meteorologist Clement Wragge. Mrs Wragge had moved into St Helens soon after the death of Ann Bennett. Rupert Wragge was a clerk and resident of Morningside while his brother Lindley was an Annerley commission agent. Acting as trustees of the property, the brothers subdivided the land into two allotments. “St Helens” was retained on a block that totalled 3 roods and 5.24 perches of land. On 31 August 1931, they mortgaged the house and land. They were able to obtain a loan of ₤130 from the Brisbane Permanent Building and Banking Company. The Wragge brothers disposed of 1 rood and 13.56 perches of excess land to William Alexander Losmore Ross on 12 March 1928.

On 18 August 1944, the Wragge brothers transferred the trusteeship of their mother’s house to their spinster relatives, Ann Marie Marguerite Blanche Wragge and Violet Lenore Eulalie Clementine Adelaide Wragge. The two sisters disposed of 35.9 perches of the land around “St Helens” to Leo Sheehan on 5 September 1944. Their home was now considered to be part of the suburb of Camp Hill, which derived its name from the ridge along Old Cleveland road where teamsters would rest their animals on the journey between Cleveland and Brisbane Town.

With the post-war housing boom in Brisbane, the sisters saw the benefit of subdividing their land even further. They sold off a 29.8 perch house block to Betty Alison Bardon and David Watson Bardon on 15 September 1952. They were issued with a new title deed for their remaining 39.2 perch block of land on 5 August 1955. After Violet Wragge died on 6 January 1967, it took nearly six months to settle her estate. Thus on 26 August 1968, Oldrick Wonke became the new owner of “St Helens”. His purchase was funded through a mortgage provided by Lindley Wragge. After Wonke’s death, Helen Michelle Timmins and Virginia Gwendoline Dowling inherited the property on 27 November 2000. That same day, Timmins bought out Dowling’s share of the property. The current owners, Carol Leigh Hattin and Kevin Robert Hattin took control of “St Helens” on 12 November 2001.

“St Helens” at 15 Ethel Street is one of the very few surviving nineteenth century residences left in Camp Hill area. Its local heritage significance has been recorded both by the Brisbane History Group in their 1990 heritage trail book Eastern Suburbs Placenames Drive and by the National Trust of Queensland in their 2001 book Where have all the creeks gone? – Camp Hill heritage drive tour.

as a residence built in 1887 for a government surveyor who was a member of a prominent local landholding family.

as one of the very few surviving examples of a nineteenth century residence in Camp Hill.