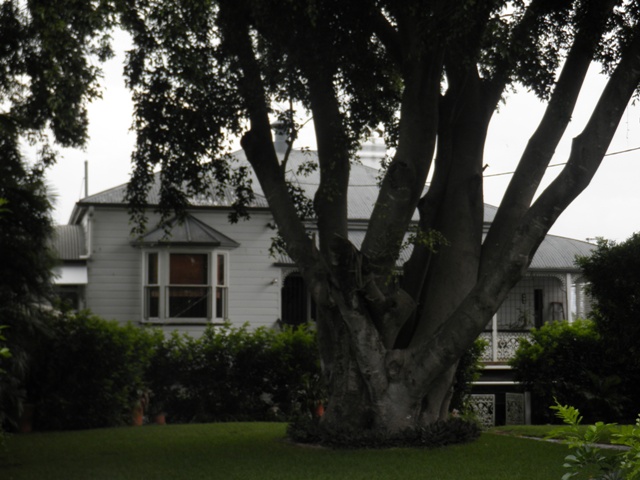 ‘Parooba’ is an elegant timber house constructed in the early 1890s. It was built for William Fryar, MLA, and his family. Fryar played an important role in Queensland politics and served as the State’s first Inspector of Mines from 1882-1904. In 1911 the large land holding was subdivided into smaller lots and residential development was invited. ‘Parooba’ is a reflection of Camp Hill’s rural beginnings in the late nineteenth century prior to its shift from a predominantly farming community on the outskirts of Brisbane to a sought after residential suburb in the early twentieth century. The mature fig tree at the front of the house is important as it contributes to the house’s historical setting.

Camp Hill took its name from the many travellers who camped there overnight on their way to and from the main Brisbane settlement in the early days of Queensland’s history. These included farmers from Redland Bay, Cleveland and Mt Cotton districts, bullock drivers and other travellers. The district around Camp Hill and Carina once had a strong German community and it consisted mainly of vineyards and dairy farms. The district remained predominantly German until the speculative land boom of the 1880s, when many farmers sold their land.

On 2 July 1866 Isaac Bennett purchased 32 acres of land that was known as “Rose Farm”. Bennett’s new land was situated where Cleveland Road met an unnamed government road. This government road would eventually be known as Bennett’s Road due to its proximity to Bennett’s land.

On 7 December 1882, Isaac Bennett transferred the land to John Smith Bennett and William Fryar, J.S. Bennett’s father-in-law. The two men divided the land into two allotments, each contained 16 acres and 30 perches of land. Fryar proceeded to have a large timber house built on the property and was first listed at the Lloyd Street address in 1892.

William Fryar was an important resident in the Camp Hill district. Prior to moving to the district Fryar had established himself as a successful politician. In 1874 he became an independent member for East Moreton in the Legislative Assembly, a role he held for the next three years. In 1882, after a long period of working as a surveyor, as well as serving as Secretary of Public Lands from 1875-76, Fryar was appointed Queensland’s first Inspector of Mines, a senior position that he held until his retirement in 1904.

From 1911 Fryar began to subdivide the large land parcel into smaller lots for sale. The estate was marketed as the ‘Parooba Estate’, The Brisbane Courier reported:

The sale of the Parooba Estate, which comprises about 50 allotments, will take place to-day…and will afford an opportunity to all desirous of securing a good building site in this progressive district.1

The subdivision and sale of land encouraged urbanisation in the area throughout the interwar period. Fryer’s house, however, remained on a large block that was slowly surrounded by residential development. Fryar resided at ‘Parooba’ until his death in 1912. It was then passed onto family members.

‘Parooba’ is important as it demonstrates the way in which the Camp Hill district evolved from a farming community to a sought after residential suburb of Brisbane. It is unclear when the fig tree in the front lawn was planted. It does, however, greatly contribute to the house’s setting and beauty and as such should be protected.

‘Parooba’ is a Victorian style high-set timber house with a hipped iron roof and curved roof verandahs with a cast iron balustrade. The front projecting wing has an oriel window, and the Living Room has a bay window to the front verandah. External walls are chamferboards.

Evidence on an early Sewerage Detail Plan indicates that the Eastern verandah and possibly the Living Room bay window are more recent additions, and the house has been raised and partly built under.

as a nineteenth-century timber residence, ‘Parooba’ demonstrates the increased growth of wealth and prosperity in the Camp Hill/Coorparoo district in this period as the area experienced increasing urbanization.

‘Parooba’ was home to William Fryar, MLA, and Queensland’s first Inspector of Mines.