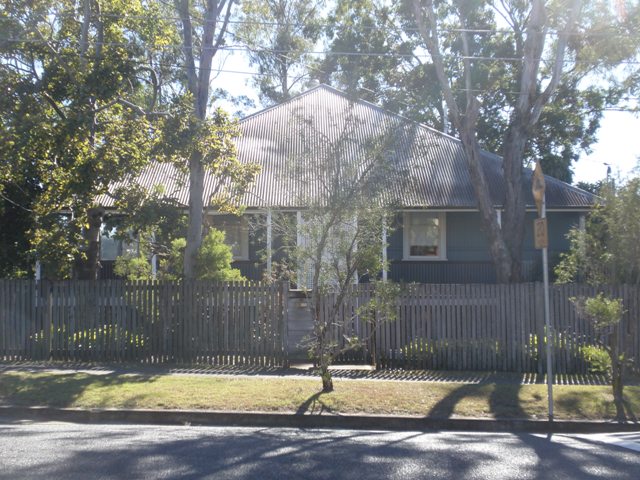 This Bungalow style house was constructed circa 1911 for Thomas Collins. After 1921, the property changed hands a number of times and in the early 1960s was converted into flats. The house has since been returned to a single, private dwelling and survives today as a remnant of early twentieth century Camp Hill.

The land containing “Lyndhurst” was originally part of a crown land purchase made by August Dimper on 10 March 1864. Dimper paid ₤88 for 88 acres of land described as Portion 123 in the Parish of Bulimba. Dimper subsequently subdivided the land. On 19 April 1866, a new title was issued to Dimper for Subdivision A of Portion 123, comprising 25 acres, 2 roods and 38 perches of land. Dimper mortgaged the land on 12 May 1868. He obtained a loan of ₤75 from Carl Tohallhms for the land that was part of the Coorparoo Shire but later would be known as Camp Hill.

Camp Hill took its name from the many travellers who camped there overnight on their way to and from the main Brisbane settlement in the early days of Queensland’s history. These included farmers from Redland Bay, Cleveland and Mt Cotton districts, bullock drivers and other travellers. The district around Camp Hill and Carina once had a strong German community and it consisted mainly of vineyards and dairy farms. The district remained predominantly German until the speculative land boom of the 1880s, when many farmers sold their land.

Valentine Hesse, a resident of Bulimba, bought the property on 20 March 1872. He also subdivided the land though he only lost 8 perches from his subdivision. A new title for Resubdivision 1 of Subdivision A of Portion 123 was issued to Hesse on 22 September 1887. On the title deed, Hesse was listed as a resident of Coorparoo. Unfortunately, the editions of the Queensland Post Office Directories that were published between 1874 and 1887 show no listing for Valentine Hesse.

On 3 November 1887, Hesse sold the property to the Metropolitan Freehold Land and Building Company, run by two men Lloyd and Mullins This land-development firm subdivided Hesse’s land into suburban blocks in preparation for a land sale. The company created the Croydon Park Estate, which offered house blocks for sale along Bennett’s Road and Macdonald, Watson and Lloyd Streets. Auctioneer G.T. Bell conducted a land auction on 17 December 1887 but the first block was not sold until 27 March 1888. The year 1888 also saw the Cleveland rail line take shape and the main impetus to suburban settlement in the Camp Hill area came from the establishment of the railways. Still, the last blocks in the Croydon Park Estate did not sell until the early years of the twentieth century.

On 13 July 1891, John Campbell Whitehall bought subdivision 173 within the Estate. Collins did not build on this small block and he only first appears as a resident of Brisbane, but at 484 lowers Bowen Terrace, New Farm, in the 1904 edition of the Queensland Post Office Directories. It would appear that Whitehall did little with his 16 perches of Camp Hill land and on 31 January 1910, he sold it to Thomas Collins. Collins was in the process of purchasing a number of adjoining blocks within the Estate. He completed these transactions by 11 February, by which time he controlled subdivisions 132, 133, 173, 174 and 175 encompassing an area of 5 roods (200 perches) of land.

Collins was already living in Coorparoo at the time that he bought the land probably in his family home in Watson Street. He built his own residence on his land in 1911 as he is first listed as a resident of Lloyd Street in the 1911-12 edition of the Queensland Post Office Directories. The name “Lyndhurst” was not given to the house at 46 Lloyd Street during the period that Thomas Collins lived there. When Thomas Collins died on 28 September 1921, his estate passed to his relative Mary Isabel Collins, though the probate was not settled until 11 April 1922. Mary was the wife of Noble Victor Collins. Mary able to put the house up for rental as the tramline had been extended to Coorparoo Junction in 1915 and so more residents were being attracted to the area. Walter A. Black became the tenant at 46 Lloyd Street in 1922. He continued to reside there until at least 1940.

Mary Collins died on 22 February 1937 and the property was inherited by Ella Ruth Collins. Ella was a spinster and she continued to rent the property to Walter Black. A sewerage map dated 9 August 1938 is the first reference to the house being named “Lyndhurst” and so it is assumed that it was Ella Collins who gave “Lyndhurst” its name. “Lyndhurst” is a Saxon word meaning “lime-wood” and the house is probably named after the village of Lyndhurst in Hampshire, Britain. The connection between the Collins family and the village of Lyndhurst remains unknown.

Ella Collins married Oswald Thomas Launders on 20 November 1940. They held onto “Lyndhurst” until after the Second World War. On 13 August 1946, they disposed of the property to William Edward Hulbert and his wife Harriet Isabel Hulbert. They used “Lyndhurst” as an investment property and mortgaged it through the English, Scottish and Australian (ES&A) Bank 0n 12 July 1951.

On 18 February 1960, Norman Ebenezer Barker Knight became the new owner of “Lyndhurst”. He paid for his purchase through a loan obtained from the National Bank of Australasia. Knight only held onto the property for a few months before disposing of it on 14 September 1960. Lionel Edward Dhu and his wife Helen Elsie Dhu, together with Heather Helen Anderson and her husband Robert William Anderson took control of the property. Their purchase was funded through a mortgage taken out through the Toowoomba Permanent Benefit Building and Investment Society. On 9 August 1960, they gained Brisbane City Council permission to convert “Lyndhurst” into flats. To complete this conversion, they sought Council’s approval on 13 February 1961, to undertake alterations to the interior of “Lyndhurst”.

Lionel Dhu died on 5 February 1967 and the property reverted to the remaining three partners. They sold “Lyndhurst Flats” to Henry Therp-Olsen, his wife Leonie Margaret Therp-Olsen and a widow Eileen Elsie Howell Scott on 16 July 1968. The new owners continued to lease the property as flats. They, in turn, transferred ownership to Frederich William Ryan and Shirley Janet Ryan on 17 February 1970.

The Ryans sold the property off to Barry John Irwin and Margaret Irwin who took possession on 12 June 1973. The Irwins returned “Lyndhurst” to a residence and they gained Council permission to alter and extend the building on 8 July 1974. The current owners, Lynn and Martin Lacy White gained control of “Lyndhurst” on 11 September 1981.  “Lyndhurst” is one of only of the few surviving Federation residences that were built in the Croydon Park Estate and its multiple uses as private residence, rental property and flats helps to contribute to an understanding of the historical development of Camp Hill.