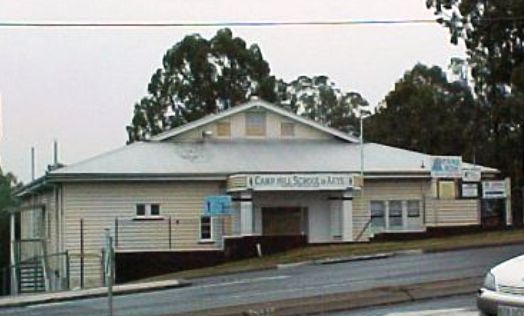 A substantial timber framed and weatherboarded rectangular building with a half-hipped roof covered in corrugated iron, and a classically derived front porch, it was constructed in 1939/40 as a School of Arts, and remains in this use today, as an important community facility.

In 1930 the Camp Hill Progress Association decided that there was a need for a School of Arts, so a committee was formed.

Schools of Arts were popular institutions in many Queensland towns, the first was established in 1849 in Brisbane. They were based on an English model, which provided opportunities for the education of wider sections of the community; this being a popular nineteenth century social concern. Typically, in Queensland, the schools were set up by the local community who received a government subsidy. The building usually provided a reading room, subscription library and a public hall for lectures and debating.1

One of the School of Arts Committee's early actions was to successfully lobby for part of the School reserve to be used for a proposed hall. Fund raising for the hall included picture benefits, raffles, socials in the state school, chocolate wheels, ugly man competition and fetes.

On 21 October 1939 the Wells Brothers signed the tender for a hall designed by James Arundel which cost £1,236/10/-. The opening on 9 March 1940 described the building as being 92 feet by 52 feet and accommodating a dance floor measuring 70 feet by 40 feet. There was a 12 deep stage. There was also a library and supper room.

During the war the School of Arts was the meeting place for the ARP (Air Raid Precautions) Officers, the centre for many fund raising functions in aid of the Red Cross, ACF (Australian Comforts Fund) and POW (Prisoner Of War) Appeals. For local St Thomas Church and Camp Hill school children it was the place for the Fancy Dress Balls, and for dancing classes. Political groups and Baby Clinics used the hall and of course the School of Arts had a lending library and held their own dances and fundraisers. It is also used for the Camp Hill Returned Service League.

Constructed in 1939/40 it is considered to be a late example of a School of Arts, with most being built at the end of the C19th, early C20th.

A substantial timber framed and weatherboarded rectangular structure with a corrugated iron roof, with a classically derived open front porch. It has a half-hipped gable roof to the front and rear. It has an open under croft with vertical timber battens, with a small enclosed area to the rear. It appears to be substantially unaltered externally.

as a School of Arts Building paid for by funds raised by the Camp Hill Progress Association and opened in March 1940, it demonstration of a strong initiative and commitment to providing community facilities for this growing suburb.

as a relatively rare and late example of a suburban School of Arts building still in its original community use.

as a late example of a substantial timber framed, weather boarded and corrugated iron roofed School of Arts building.

as a substantial traditional timber framed, weather boarded and corrugated roofed structure with a classically derived front porch, located on a prominent corner location on the busy Old Cleveland Road, it is a well-established local landmark.

as a School of Arts building which has continuously served the Camp Hill community for over 75 years, and for its association with a range of WWII community and defense groups, and the Camp Hill Returned Service League.