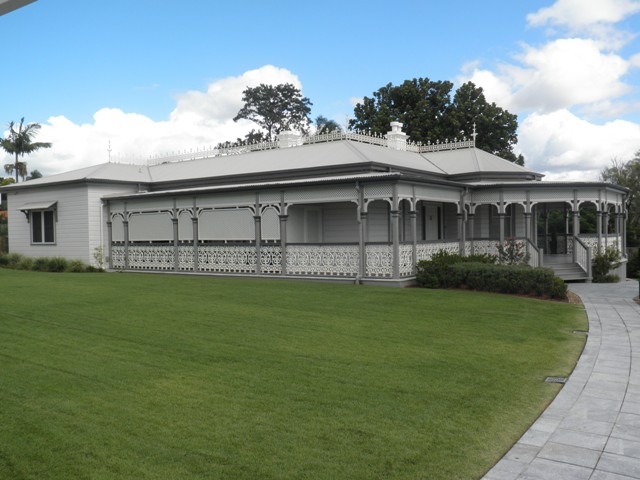 This house was built circa 1887 for either Abraham Street or Edward Mann Barnett, employees of the Barnett and Company importing business. It was likely designed by eminent architect George Henry Male Addison. The house is a rare example of a nineteenth century dwelling in Camp Hill, which did not develop as a residential suburb until the 1920s. Additional buildings on the site are former stables and coach house buildings designed in 1896 by Richard Gailey.

The land on which this residence was built was originally part of a purchase of crown land made by James Cowlishaw and Louis C Gould on 17 July 1862. The two partners paid £56 for 56 acres of undeveloped land, described as Portion 121 in the Parish of Bulimba. They bought the land for investment purposes, named it the ‘Windsor Estate’ and subdivided it into small farm lots. A selection of these lots totalling just over three acres was purchased by Isaac Markwell in 1882. Markwell’s holding was transferred to Abraham Street, junior, in 1885. Street had been employed as an office-boy with Barnett and Company, warehousemen and importers, and worked his way up to managing the company’s finances. In the mid-1880s he began spending large amounts of money on luxury items and land, including this site and a second parcel of land in Princess Street, Camp Hill.

Camp Hill was then known as Coorparoo or East Coorparoo. Street’s land holdings were on the edge of the Coorparoo Shire, close to the boundary of the rural Belmont Shire. Coorparoo was developing as a popular residential suburb in the 1880s, with estate sales encouraging the construction of large residences for some of Brisbane’s well-to-do citizens. The Camp Hill area, however, was poorly serviced by transport until the 1920s. This limited its growth, and the area was considered ‘bush’ in the nineteenth century. Street, nonetheless, engaged newly arrived architect George Henry Male Addison to design a residence on his landholdings. On one site he had built a grand mansion, ‘Coorparoo House’ or ‘Rockhampton House’, which is still extant and stands opposite this property. Street also appears to have commissioned the single-storey wooden house which stands on this site.

Addison, of Melbourne architectural firm Terry, Oakden and Addison, had moved to Brisbane in November 1886 to supervise the construction of the London Chartered Bank building. The distinctive style of his early Brisbane domestic designs, including Street’s ‘Coorparoo House’, made him a highly sought-after residential architect. Addison went on to design a number of prominent Brisbane residences, including Cliveden Mansions (1888), Kirkston, Windsor (1888-9), Ralahyne, Clayfield (1888), and Cumbooquepa, South Brisbane (1890).

Addison called tenders for two Coorparoo residences in May 1887. In September, the site containing the wooden residence was transferred to Edward Mann Barnett, Street’s fellow employee at Barnett and Co. By November Barnett had mortgaged the property twice, for a total of £3,500. The money may have been used to fund the completion of the residence, but it is more likely that the loans were connected with the family company, which was experiencing significant financial difficulties. In March 1888, Abraham Street was arrested and tried for fraud. He was convicted of multiple charges of fraud and embezzlement, having stolen thousands of pounds from his employer Barnett and Co. The trial took place in April 1888 and was covered in detail in Brisbane and Ipswich newspapers. Street’s fraud appears to have forced the winding up of Barnett and Co, and the judge in Street’s trial ‘saw no extenuating circumstances, and prisoner by his misdeeds had contributed materially if not wholly to the ruin of Barnett and Co.’ Street was gaoled for ten years, and his ‘Coorparoo House’ was auctioned.

Edward Barnett’s involvement in the trail was minimal, though newspapers described him as ‘conspicuous by his absence’. His assigned estate had been offered for sale in February 1888, including his ‘thoroughly well-built and beautifully finished Villa Residence’ at Coorparoo. Barnett relocated to Sydney, where he was married, and mortgagee Albrecht Feez again offered Barnett’s estate for sale. The estate was ‘well situated’ on elevated land at Camp Hill and included ‘good stabling’, essential in the remote Camp Hill area. There was also a racecourse nearby in Coorparoo, adding attraction for those interested in racing. The stated £2,000 pound mortgage over the property may have discouraged purchasers, however, as Feez retained the property for a further three years.

In March 1891 title to the property passed to John GW Barnes, managing director of stock company BD Morehead and Co. The Barnes family named the residence ‘Wandoo’ and lived there until 1899. The stable building burned to the ground during their tenancy one night in May 1896, providing a spectacle for East Coorparoo. In July 1897 Richard Gailey advertised for tenders for new stables, coachhouse and associated rooms at Coorparoo, which appear to be for ‘Wandoo’. Gailey, one of Brisbane’s most prolific and prominent architects, seems an unusual choice to design a stable building. But the house’s former stables had been unusually grand: a two-storey hardwood building valued at £300, which was considerably more than many contemporary houses. The ‘very extensive stables’ were emphasised in sales advertisements for the property in 1899 and 1907.

‘Wandoo’ was briefly owned by Arthur Springhall, of the South Brisbane Butter Company, before it passed to Ada and William Greenfield in July 1910. The Greenfields had been residents of Camp Hill since the 1890s, relocating to ‘Wandoo’ from nearby Lloyd Street. They retained ‘Wandoo’ until 1945, though from the 1920s they reduced its surrounding land to just over three roods by subdividing and selling small allotments. Demand for land in Camp Hill had increased dramatically after the opening of a tram line extension along Old Cleveland Road in 1925, which simultaneously raised the value of the Greenfields’ land. The land subdivisions and sales also turned up an interesting artefact: digging on the site in 1932 revealed a bush-house buried three foot underground, which contained a perfectly preserved loaf of bread.

‘Wandoo’ was offered for sale in 1950, with advertisements touting its five bedrooms, maid’s room, marble fireplaces and large fernery. The property passed through a number of owners in the second half of the twentieth century. Minor alterations were made in 1958, including the addition of a garage and the enclosure of the verandahs. ‘Wandoo’ passed to its present owners in 1997.

as a fine nineteenth century residence and stables