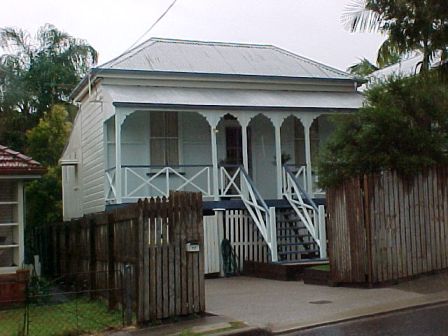 The land on which this residence was built was originally part of a purchase of crown land made by James Cowlishaw and Louis C. Gould on 17 July 1862. The two partners paid ₤56 for 56 acres of undeveloped land, described as Portion 121 in the Parish of Bulimba. They bought the land for investment purposes and subdivided it into small farm lots. Samuel Fisher, a resident of Brisbane Town, purchased 4 acres and 22.75 perches from Cowlishaw and Gould on 28 March 1864. Fisher mortgaged the land through Simon Fraser on 10 June 1886. Fisher may have used this ₤25 loan to pay for the further surveying and subdivision of this land. He then sold the land to John Thomas Costin on 26 August 1886.

Costin had purchased a block of land that comprised 16 perch housing allotments. So he named the block, the “Windsor Estate” which comprised Alice (now Warilda) Street, Queen (now Tarana) Street, Princess Street, Maud (now Brinawa) Street, Albert Street, Edward (now Lockyer) Street and one side of a government road that later would become Boundary Road. The sale of “Windsor Estate” was conducted by the firm of J.B. Ellis of Queen Street, Brisbane, with the first block sold on 6 September 1886.

On 7 December 1888, Joseph Chase purchased subdivisions 15 and 16 in the “Windsor Estate”. Chase obtained a total of 32.2 perches of land, on which he obtained a mortgage on 7 May 1889. He was able to gain a loan of ₤80 from the Federal Building Land and Investment Society. Chase first appears as a resident of Queen Street, Coorparoo in the 1895-96 edition of the Queensland Post Office Directories. As the information for these annual directories were collected during the year prior to publication, then it can be assumed that Chase built his cottage at 17 Tarana Street during 1894. His home was built on subdivision 15 and it was a modest cottage as befitted his occupation as a labourer.

Albert Abbott bought the house and land from Chase on 24 May 1901. When Abbott died on 24 June 1907, his estate was inherited by Emily Mary Jane Abbott. After the title deed to the property was destroyed in a fire, a new title was issued on 6 June 1912. A few months later, on 10 September 1912, Walter Watkins became the new owner of 17 Tarana Street. Watkins financed his purchase through a mortgage of ₤65, which he obtained from the Trustees of the United Ancient Order of Druids (Grand Lodge of Queensland Friendly Society). Then on 31 May 1920, Walter Watkins transferred the property to James Reece Watkins of Brisbane. Known as Reece, Watkins was a plumber who lived at Logan Road Coorparoo. So he chose to lease out the Queen Street cottage to tenants. When Reece Watkins died on 19 January 1926, his estate passed to the state government’s Public Curator’s Office.

The Queensland Government operated 17 Tarana Street as a rental property until 4 September 1935 when it was sold to Eliza Isabella Harwood and her husband William Harwood. The Harwoods resided at their Queen Street property rather than palcing it on the rental market. By 1938, Queen Street had been renamed Tarana Street and Chase’s little cottage was surrounded by the larger, more modern residences that had been built during the inter-war period. With William Harwood’s death on 5 December 1951, the property was transferred to the sole ownership of Eliza Harwood. She only retained the property for a few years before disposing of it. Albert Edgar Steele and his brother Alan Albert Steele became the new owners on 29 March 1955. With the post-war housing boom creating a demand for housing subdivisions close to public transport, the Steele brothers found that they had a good investment property located close to the tramline on Old Cleveland Road. Thus they decided to sell off subdivisions 15 and 16 separately. Chase’s cottage on subdivision 15 was sold to Joyce Gertrude Etherington Bell on 28 July 1955. The other block was sold off on 1 December 1955.

Joyce Etherington, described in the 1955 title deeds as a “single woman”, also used 17 Tarana Street for investment purposes. She obtained a mortgage on the property from the Steele brothers on 20 October 1955. She disposed of the property to William Spottiswood on 25 July 1958. He died on 25 August 1964 and his widow Phyllis Lily Spottiswood finally inherited the house and 16.1 perches of land on 12 August 1965. She continued to own the property until 1981.

On 26 June 1981, Trevor John Seib and Kristine Mary Spinner became the new owners of 17 Tarana Street. They only held onto the property for six months before selling it to Mark Edward Parry. He in turn sold the property onto Robyn McCrane and Boyd Douglas on 25 June 1984. As Chase’s cottage approached its centenary, it continued to be used as an investment property that was passed quickly from one owner to the next. Robyn McCrane ceased being a co-owner of the property on 20 November 1990, when Boyd Douglas was issued a new title deed that he shared with Joanne Susan Axelsen. They transferred ownership to Margaret Ann Barnewall on 21 April 1993. The current owner, Lynnelle Sulvera Day took possession of the property on 10 April 2002.

as an 1894 workers cottage built as part of the 'Windsor Estate'.

as one of the few surviving nineteenth century residences left in Camp Hill.