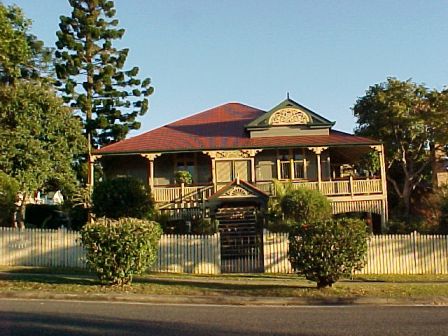 The land containing “Eastholm” was originally part of a Crown land purchase made by August Dimper on 10 March 1864. Dimper paid ₤88 for 88 acres of land described as Portion 123 in the Parish of Bulimba. Dimper subsequently subdivided the land. On 19 April 1866, a new title was issued to Dimper for Subdivision A of Portion 123, comprising 25 acres, 2 roods and 38 perches of land. Dimper mortgaged the land on 12 May 1868. He obtained a loan of ₤75 for the land that was part of the Coorparoo Shire but later would be known as Camp Hill.

Camp Hill took its name from the many travellers who camped there overnight on their way to and from the main Brisbane settlement in the early days of Queensland’s European settlement. These included farmers from Redland Bay, Cleveland and Mt Cotton districts, bullock drivers and other travellers. The district around Camp Hill and Carina had a strong German community and it consisted mainly of vineyards and dairy farms. The district remained predominantly German until the speculative land boom of the 1880s, when many farmers sold their land.

Valentine Hesse, a resident of Bulimba, bought the property on 20 March 1872. He also subdivided the land though he only lost 8 perches from his subdivision. A new title for Resubdivision 1 of Subdivision A of Portion 123 was issued to Hesse on 22 September 1887. On the title deed, Hesse was listed as a resident of Coorparoo. Unfortunately, the editions of the Queensland Post Office Directories that were published between 1874 and 1887 show no listing for Valentine Hesse.

On 3 November 1887, Hesse sold the property to the Metropolitan Freehold Land and Building Company, run by two men, Lloyd and Mullins. This land development firm subdivided Hesse’s land into suburban blocks in preparation for a land sale. The company created the Croydon Park Estate, which offered house blocks for sale along Bennett’s Road and Macdonald, Watson and Lloyd Streets. Auctioneer G.T. Bell conducted a land auction on 17 December 1887 but the first block was not sold until 27 March 1888. 1888 also saw the Cleveland rail line take shape and the main impetus to suburban settlement in the Camp Hill area came from the establishment of the railways. However, blocks within the Croydon Park Estate continued to sell slowly well into the early 1900s.

Title deeds show that the site of “Eastholm” was not sold until 15 October 1907, when James and Harriett Rait bought the land. They purchased a large block comprising 3 roods and 8.1 perches (128.1 perches) described as Subdivisions 150-153 and 191-194 of Resubdivision 1 of Subdivision A of Portion 123. The land ran from Watson Street down to Llyod Street. James Rait appears as a resident of Watson Street, Coorparoo for the first time in the 1909-10 edition of the Queensland Post Office Directories. This suggests that “Eastholm” was built by 1908. By 1909, the state electoral roll showed that an Alan Rait, a laboratory assistant was also living at “Eastholm”. In 1915, the tramline was extended to Coorparoo Junction, thereby improving public transport access to Camp Hill.

After the First World War, Camp Hill began to acquire more new residents who required land on which to build their homes. Thus the Rait family subdivided their large block and disposed of a couple blocks in land sales. John William Shaw and Maggie Shaw Hanson acquired Subdivisions 193 and 194 comprising 32.1 perches facing Lloyd Street on 23 May 1928. Postman Bertie John Lislie obtained the other two Lloyd Street blocks (Subdivisions 191 and 192) on 3 April 1930. The 1938 sewerage map of Camp Hill, shows the Rait’s residence marked as “Eastholm”, which is the first reference to this house name. The main entrance to “Eastholm” was off Watson Street and there was a side entrance off Leepers Lane that led to a garage. According to information compiled by a former “Eastholm” owner, this lane is named after the Rait family’s dog “Leeper”. More likely, both Leepers Lane and the nearby Leeper Street are named after Mr. RJ Leeper whose residence was across the lane from the Rait’s land. Leeper’s residence was in existence in 1902 when Leeper and Byrnes Street became part of the new Byrnes Estate. In the report History of Eastholme, it is also claimed that Rait’s land, at what is now 85 Watson Street, was originally occupied by stables, which, during World War Two, were sandbagged and converted into a family air raid shelter. Later the stables were destroyed by fire and replaced with a tennis court.

James Rait died on 12 January 1949 and his estate passed into the hands of the Public Curator’s Office. Harriett must have died before her husband as the state government acted as the administrator for both their wills. The property was finally transferred to Lorna Watson Short on 22 August 1950. She sold-off Subdivisions 150 and 151 (29 perches) to Struthers Mansfield on 6 November 1950 and thereby reducing the “Eastholm” property to its current size.  Lorna Short, a spinster and the Rait’s grand daughter, sold the house and remaining land to Honor Daphne Alys Richards, the wife of Phillip Gibbs Richards on 11 June 1953. According to information compiled by a former “Eastholm” owner, Phillip Richards was the owner of the Penny’s Department Store in Adelaide Street in the City. He converted “Eastholm” into two flats for the use of any Penny’s managers who were visiting Brisbane.

On 6 August 1953, “Eastholm” was sold to Sarah Hamilton, the wife of William Henry Hamilton. They apparently lived in one flat and rented out the other flat. Sarah Hamilton funded her purchase of “Eastholm” by taking out a mortgage on the property on the day of purchase. The lender was Lorna Watson Short. Paul Anthony Ryder and his wife Mona Irene Ryder bought the property on 12 March 1974. Mona was an artist and Paul was a university lecturer. They converted “Eastholm” back to a single residence. The Ryders only held the property for two years before selling it to Roslyn Pocock on 14 July 1976. Roslyn and accountant husband Neville began restoration work on the house and on 15 January 1979, the Brisbane City Council granted permission for an extension to be added to “Eastholm”. The cost of this extension was $30,000. On 20 August 1981, Council granted permission for the Pococks to place a pool on their land. Supreme Pools installed the pool at a cost of $6,500.

Four years after the pool was completed, the Pococks sold the property to Marie-Louise Cole and Donald Michael Cole. The Coles ran a computer business. They disposed of the property to brothers Kevin James Richardson and Wayne John Richardson on 16 August 1990.  The current owners, Gregory Vann and Janelle Smith purchased the property on 3 June1994. “Eastholm” is a good example of a Federation residence and it is only one of the few such residences built in the Croydon Park Estate. “Eastholm’s” local heritage significance has been identified by the Queensland Branch of the National Trust and in 2001 it was featured in a Camp Hill heritage trail.

as an example of a fine residence constructed in Camp Hill during the early twentieth century.

as an early twentieth century Bungalow style residence that makes a pleasing contribution to the streetscape.