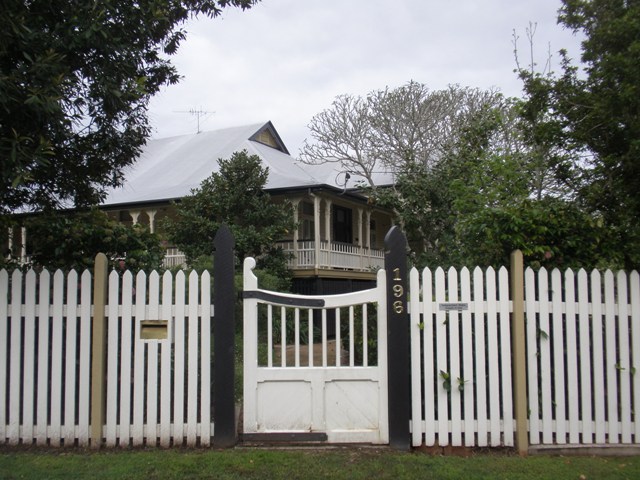 This large timber house was constricted circa 1900 for School Inspector Oliver Radcliffe. When the farmlands of Chelmer and surrounding districts were subdivided into residential lots a proportion were taken up to build fine residences for Brisbane professionals. The close proximity of the rail line allowed commuting to the city. Radcliffe, who had enjoyed a long career in education, was the son of Amos Radcliffe, one of the Oxley’s earliest pioneers, and who had been the first to attempt to grow sugar cane in the district.

School Inspector Oliver Radcliffe acquired the land in 1899 and built the house shortly afterwards. He appears in the 1900 POD in Graceville, after being listed in Breakfast Creek in the 1897-1899 POD. Radcliffe had a long career in the Department of Public Instruction, starting there as a pupil teacher in January 1868, aged 12. He worked his way upwards and in 1897 was appointed a District Inspector, Professional Class III.

Oliver’s father was Amos Radcliffe, settled at Oxley in 1861, and was the first farmer to grow sugar cane in the district, building a mill on Oxley Creek in 1869. Oliver was Amos’ oldest child, born November 1855, one year after Amos had married 16 year old Sarah Peach in Adelaide. Oliver was the first pupil registered when the West Oxley (Sherwood) School opened in 1867.

Oliver Radcliffe held the large property at Mortlake Rd until 1908. It passed through a number of owners, the land on which the house stood being reduced in size to 2 roods and 32 perches in 1925 (allotments 23-26, 90-92). It was bought by Leonard Lindsay Byth in 1960. When Judge Byth sold the property to developers Mitchloe Pty Ltd in 1994, the house became the centre of much public debate, since its new owner wanted to remove it for infill housing. Local residents’ petitions in protest prompted, in part, the introduction by Brisbane City Council of Demolition and Removal Controls for character housing, and also the Local Area Planning schemes.

Lot 76, directly behind the house, once held the property’s tennis court, but has subsequently been sold and built upon.

This residence presents as a turn of the century dwelling of bungalow style with a Dutch gable roof. The dwelling is constructed of wood with a tin roof. There are two brick fireplaces, with the chimneys in a prominent position. There is an attached service wing at the rear.

as it is a large fine house built as a professional's residence at Chelmer circa 1900 when the area was developing as a residential suburb.