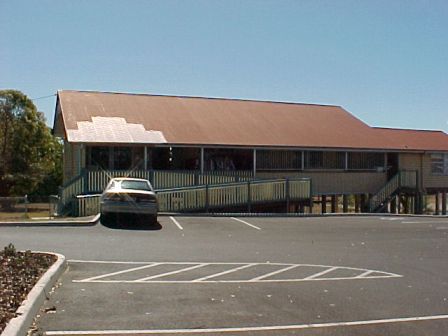 This building was constructed in 1931 as the second classroom block for Chermside School (opened 1900). Students planted the trees in the 1920s to celebrate Arbor Day, an important event on the Queensland schools calendar. Due to falling enrolments, Chermside School closed in December 1996. This building and trees are the only reminders that this was once the site of Chermside School.

Europeans settled Chermside in the 1850s and the large farming district was first known as Downfall Creek after the nearest large source of fresh running water.

By the 1890s, the Downfall Creek district had grown in population to over 600 residents. Many of the residents had children and the nearest existing schools, at that time, were located at Aspley (then known as Little Cabbage Tree Creek), Nundah or Stafford. All these schools were about the same distance from the Downfall Creek district and required the district’s children to undertake a long journey of four miles district backwards and forwards each school day. So district representatives began to lobby for a local school to be built.

The first district meeting to discuss a local school was held on 2 June 1898 at the home of the large landowner and district pioneer Thomas A. Hamilton. This was a private meeting of a few concerned residents and it was decided to hold a general public meeting on 6 July 1898.

At this meeting, Hamilton and William E. Sammells proposed a site for the school on Portion 535 located at the north-western corner of the intersection of Rode and Gympie Roads. These were two major, well-defined roads within the Downfall Creek district and therefore the proposed school was to be sited in a prominent location. The site comprised cleared land opposite Downfall Creek’s Alliance Hall. The site was part of an original land purchase made by Peter Fleming on 22 May 1866. Fleming paid £10.8.11 for 10 acres, 1 rood and 31 perches of uncleared land (Portion 535). Fleming sold portion 535 to James Watts Stewart on 15 July 1876. At that time the property’s dimensions had been reassessed so that Portion 535 comprised 11 acres, 1 rood and 34 perches of land. The school was to receive 5 acres of Stewart’s land.

Hamilton submitted an application for a district school to the Queensland colonial government’s Department of Public Instruction on 20 July 1898. The department sent an inspector, Mr. Cain to talk to residents and insect the site, two weeks later. On 26 August 1898, the local residents were informed that the department had granted approval for a Downfall Creek district school. A local school building committee was formed to raise funds as the Department of Public Instruction had made it clear that the local community had to raise one fifth of the cost of construction of a new school building. Subscriptions were called for from Downfall Creek residents and there were numerous fundraisers held within the district during 1899. On 3 February 1899, the Secretary of the Department of Public Instruction purchased the school site, described as subdivision 1 of Portion 535.

By 1929, the year the Great Depression began, Chermside School enrolments had risen to 183. The original 1900 school building had become cramped due to the increasing enrolments but funds were scarce due to the Depression. But a new opportunity for fund-raising had become available through the opening of the open-air Chermside Picture Show (later the Dawn Theatre closed and demolished in 2005) further along Gympie Road in 1928.  ‘Benefit Nights’ for the school were held at the Chermside Pictures.  Funds were provided for an additional school building.

This new building (the one that is remains on the site) was to contain two classrooms and a verandah. The contract to build the new classroom block was awarded to builder Mr. W.M Lindsay on 19 September 1931. The cost was £698. The opening of any new state government building was a big event during the dark, early years of the Great Depression. The Queensland Minister for Education Mr. R.M. King officially opened the new Chermside School building on 4 March 1932.

The first Arbor Day was held in Queensland on 1 August 1890 and was proposed by Philip McMahon, the curator of Brisbane’s Botanical Gardens in the City. He distributed 2,496 trees obtained from the Botanical Garden’s nursery for planting to schools throughout Queensland. This soon developed into an important day on the annual school calendar for Queensland. Arbor Day marked the final month of winter in Queensland, with the tree plantings expected to benefit from the onset of the spring season in September. School children were given trees to plant around the school grounds in places where they might provide playground shade and/or add to the aesthetic attractiveness of the school grounds. They were often planted along the fence line of the school so as to help mark the school’s boundaries. The 1946 aerial photograph of the school shows a substantial row of trees planted within the Chermside School grounds along the Henry Street fence line.

After World War Two, the opening of new schools at Wavell Heights (1947) and Craigslea in West Chermside (1972) decreased the enrolments pressure on Chermside School. With spread of Brisbane’s urban sprawl during the 1980s and 1990s, the creation of new, outer Brisbane suburbs meant that Chermside became less attractive to new homeowners. This led to declining enrolments such that, by 1988, Chermside School had 4 teachers and only 72 students. At the close of the 1996 school year, in December, the Queensland Government closed Chermside School due to decreasing enrolments. In 1997, the Uniting Church in Australia purchased the property. The Uniting Church generously donated the first (1900) school building to the local community and it was transported to 7th Brigade Park at Chermside to become part of a community buildings precinct. Already on the site was a post-War hall ‘HMAS Voyager’ used by R.A.N. naval cadets. In 1999, the former Sandgate Drill Hall was moved to the park site and joined the other two buildings. The former Downfall Creek School building is the used as offices and an archives centre by the Chermside & Districts Historical Society. Other school buildings were removed from the Gympie Road Chermside School site in preparation for the construction of a new Chermside Uniting Church at the corner of Rode and Gympie Roads. This church was completed in 2004.

as a remnant of the Chermside School (1900-96), marking the school site that was chosen after lobbying by the local rural community.

as a local school building used for community fund-raising activities, fetes, public meetings etc as well as the education of Chermside's children for 96 years; as the trees were planted by Chermside school children in the 1920s to mark Arbor Day in their district and to improve and beautify their school grounds.