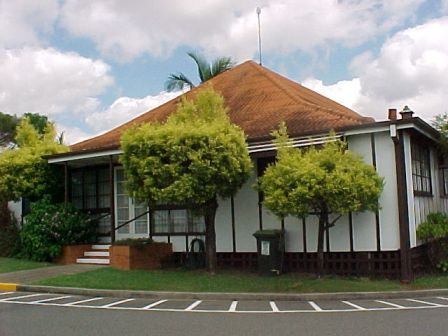 This site was first opened as the Chermside Garden Settlement in 1936 and provided the first aged care garden settlement in Brisbane. It was constructed due to the combined efforts of Methodist social advocate Reverend Harold M. Wheller and philanthropist/businessman George Marchant. By mid-World War II, the settlement had expanded to 29 cottages and included the Marchant Lodge Hall, ‘The Sanctuary’ chapel and a bowling green, and continued to expand throughout the twentieth century. In 2013 the settlement refocussed its activities and approval was given in 2014 to relocate 4 cottages into the Heritage Settlement Area included in the current boundary.

The creation of an aged person’s home at Chermside is linked to two men – George Marchant (1857-1941) and the Reverend Harold Manuel Wheller (1888-1979). It was Wheller, the Superintendent Minister for Brisbane’s Central Methodist Mission who, in 1934, envisaged a new, modern facility that could care for the elderly. At that time, during the height of the Great Depression, aged care was either the responsibility of individual families, or of regimented, government-run institutions such as the Dunwich Benevolent Asylum at Stradbroke Island. Wheller wanted to pioneer a new standard of semi-independent aged care that was based around small communities, or settlements, set amongst pleasant gardens. But, due to lack of funding, Wheller was unable to put this concept into practice until he presented the idea to Brisbane businessman and philanthropist George Marchant.

Wheller moved to Queensland in 1904 and was ordained in Brisbane in March 1905. He was an advocate for social justice, particularly during the Great Depression (1929-39). He established two Methodist-run hostels in Brisbane for people made homeless by the Depression. He also established a Brisbane mission, run by his wife, Edith May Wheller that served meals daily to 400 unemployed men, as well as a clothing bank that provided for the destitute. From 1931-41, he conducted a weekly worship service particularly for the unemployed. He also administered the Methodist Queensland Book Depot in Adelaide Street, St Helen’s hospital and the William Powell Home for prisoners on release. Wheller was a member of the University of Queensland Senate (1936-56) and a founding member and later Chairman of the Queensland temperance League. It is presumably through his efforts in the Temperance League, that Harold Wheller established a solid working relationship with George Marchant.

A man of considerable wealth, Marchant not only owned aerated waters factories in Brisbane, Sydney, Melbourne, Adelaide and Newcastle but also held the world patent on a bottling machine. In 1899, Marchant purchased 97 acres of land in Chermside for grazing purposes. This land became known as Marchant’s Paddock and, in 1917, Marchant offered this land as a park to the Kedron Shire Council. Marchant Park was officially opened on 3 May 1924. Marchant was also a philanthropist, contributing ₤82,000 towards the construction of the Queensland Temperance League’s Canberra Hotel in Ann Street, the City, as well as donating money to the Montrose Crippled Children’s Home at Taringa, the Kings Home for Soldiers, the City Mission Home and the Paddington Creche and Kindergarten.

In August 1935, Marchant offered to donate 26 acres of Chermside land towards Wheller’s project. Downfall Creek, Gympie Road and a small, new interwar housing estate along Curwen Terrace bordered the site on offer. Chermside was largely a rural, farming community. It had a small shopping and community precinct centred on the Hamilton Road and Gympie Road intersection but it also had a few modern facilities such as the Chermside (later the Dawn) Theatre that opened in 1928. A local bus service connected the Chermside shops to the tramline that ran from the Lutwyche Cemetery into town.

Marchant’s proposal also included the offer to construct 20 new cottages suitable for elderly residents. Wheller accepted Marchant’s generous donation and the first attempt to put into practice the garden settlement for the aged concept began to take shape. On 7 July 1936, Marchant applied to the Brisbane City Council to gain approval for the erection of 20 wooden cottages for an Aged Peoples Home along Curwen Terrace. This application indicated that the project was expected to cost ₤7,103. The architect who designed the cottages was Albert Brooks, who had previously been employed by the prominent Brisbane architect firm of Hall & Dods. Mr. H. Lanham, of Annerley Road, Annerley, won the tender to build the cottages.

On 3 November 1936, the Governor of Queensland, Sir Leslie Wilson, officially opened the Chermside Garden Settlement. The initial site consisted of 20 cottages plus a large community building “Marchant Lodge”. In 1939, a further nine cottages were added to the site and a bowling green was laid down. In 1941 a Methodist Chapel, known as “The Sanctuary” was dedicated. That same year, the site was being advertised under the title of the Marchant Garden Settlement Homes for the Aged.

The lack of labour and materials caused by the Second World War stopped any further expansion of the site, though the 1946 aerial photograph shows 34 structures on the site as well as the entrance gates and circular driveway.

Under Wheller’s administration, the Chermside Garden Settlement expanded rapidly after the war. A further three cottages together with Settlement House were added to the site. In 1951, Cooper House and 12 cottages were built and a building containing eight bedrooms for elderly males was completed two years later. The Sydney William Jones House was completed and both Marchant House and the Gardens Settlement site were extended during 1954. The Uhl Memorial Hall was opened in 1957, the same year that Henry Youngman House and 12 cottages were completed. In 1962, a branch settlement, the John Wesley Gardens was opened in North Chermside. Wheller was awarded an O.B.E. in 1952 and he continued to run the Chermside Garden Settlement until 1976.

In 1967, new works, worth $425,000, were completed at the Chermside Garden Settlement. The major component was St Paul’s House, which contained 50 single bedrooms. The N.A. Nevitt Wing, which was a 20-bed extension to St Luke’s Hospital, was another new addition. The Queensland Premier, Frank Nicklin, opened these buildings on 30 September 1967. These additions brought the total accommodation available on the site to 455. By 1977 this figure had grown to about 600 with the site also having expanded from 26 to 57 acres of land. In 1978, the owners changed their name to the Wesley Mission of Brisbane. In 1980 the Marchant Garden Settlement Homes for the Aged became known as H.M. Wheller Gardens in honour of the Reverend Harold Manuel Wheller.