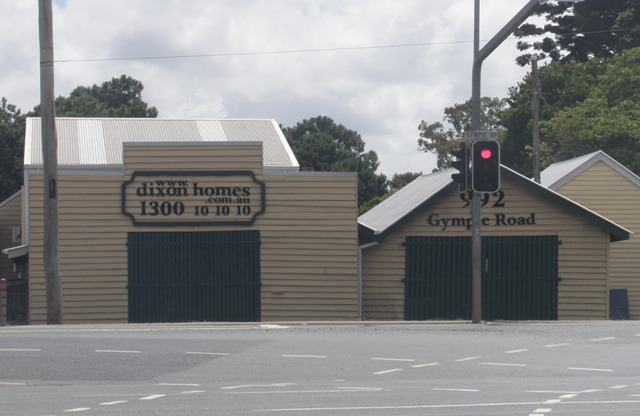 Two of the timber buildings on this site are the former forge and shed of Vellnagel’s Blacksmith business. They were previously located on the opposite side of Gympie Road on land purchased by August Vellnagel in 1899. When George Marchant donated his adjoining land to Kedron Shire Council in 1917, Vellnagel was offered land across the road to facilitate the creation of Marchant Park. August Vellnagel moved his residence and business to the western side of Gympie Road, to an acre of land given to him by the Kedron Shire Council as compensation for the loss of his original four acres.

Vellnagel continued his blacksmithing business until his death in 1932. His family continued the business with an extension added on the northern side of the forge after 1946. The Vellnagel Bros business closed around 2002 but the buildings remain a local landmark along one of Brisbane’s major thoroughfares.

Following the declaration of Queensland as a separate colony in 1859, the newly formed government was anxious to increase the colony’s population and to encourage agricultural settlements. Edward Huxtable surveyed the Chermside district on behalf of the government in 1864. At that time, the district was named after the nearest large watercourse – Downfall Creek. The first sale of crown land in the district was held in Brisbane on 23 May 1866.

In 1868, Edward William Murphy paid £186 for 504 acres of land at Downfall Creek which became known locally as Murphy’s Paddock. At this time, large numbers of German migrants began arriving in Australia. In Brisbane, a substantial number of these German families came to settle in the Downfall Creek District. They took up small farming, with many of these families choosing to reside near the junction of Hamilton and Webster Roads, an area that became known locally as the ‘German Quarter’.

Following Murphy’s death in 1881, the land was sold in 1885 to Michael Ballinger. By December 1891, Murphy’s Paddock had been subdivided, leaving Ballinger with a smaller allotment comprising over 101 acres. By 1897, a roadway ran through Murphy’s Paddock and connected to Gympie Road.

August Vellnagel migrated to Queensland from Germany in 1891. After working as a stock hand and then later at Bundaberg’s sugar mills, he purchased Christopher Murr’s leather works shop situated at the corner of Gympie and Hamilton Roads.

On 7 February 1899 August Christian Vellnagel purchased four acres of “Murphy’s Paddock” on Gympie Road. Vellnagel established a blacksmith business on this site and “achieved a good reputation for shoeing horses”.1 He attracted particular business from the farmers of the ‘German Quarter’ and married Christiane Fischle, the daughter of a German farmer from Aspley.
The same year, George Marchant, the owner of a successful aerated waters factory, purchased 97½ acres of land that was formerly Murphy’s Paddock, other than the 4 acres owned by Vellnagel. Marchant wanted the land to use as a spelling paddock for his horses. Thereafter the land became known locally as Marchant’s Paddock. A man of considerable wealth, Marchant not only owned factories in Brisbane, Sydney, Melbourne, Adelaide and Newcastle but also held the world patent on a bottling machine. He was also a philanthropist, contributing £82,000 towards the construction of the temperance organisation’s ‘Canberra Hotel’ in the City, as well as donating money to the Montrose Crippled Children’s Home, the Kings Home for Soldiers, the Garden Home for the Aged, the City Mission Home and the Paddington Creche and Kindergarten.

In 1917, Marchant offered to donate Marchant’s Paddock to the Kedron Shire Council for use as a park. Marchant placed, as a major condition of his donation, the requirement that Vellnagel’s land also had to be acquired by the Shire Council. This would allow the whole area bounded by Gympie, Murphy and Ellison Roads to be turned into a public park.

The Kedron Shire Council decided, on 20 March 1917, to resume Vellnagel’s land. The Council offered £150 for his four acres of land, a further £75 for loss of business and one acre at the corner of Short Street and Gympie Road, to where they would move the blacksmith’s shop and house free of charge. Vellnagel attended the Council meeting on the 21 May 1917, when he presented a written objection to the resumption of his land. As well, a number of ratepayers, led by Councillor Ruskin, pushed for a rejection of Marchant’s offer of land. Vellnagel probably found himself in a difficult situation as World War I was reaching a climax. Undoubtably there was some anti-German sentiment directed at the Chermside and Aspley districts where there was a large German migrant population. The resumption was registered on 11 February 1919.

At the Council meeting held on 13 March 1919, discussions continued on the subject of the £1,000 required to outfit the park and compensate Vellnagel. By 6 March 1920, the Council had also taken over responsibility for the erection of a war memorial on the land that had been given the name of Marchant Park.

By 1 February 1921, Marchant was threatening to withdraw his offer of land by 1 July, if the issue of moving Vellnagel off his land had not been resolved. Vellnagel was offered a similar size block of land that was situated on a Council reserve that was across Gympie Road from his existing site. On 2 March, Vellnagel wrote to the Council and accepted the land swap but he requested an additional £300 compensation for loss of business and cultivation, deprivation of fruit trees and personal inconvenience. Vellnagel’s request was accepted by the Council on 8 March 1921.

Photographs of the smithy in its original location show a timber gabled building with a corrugated iron roof extending over a front verandah which addresses the road. A later photograph shows the forge was extended at one end and a chimney added. A second gabled timber building is visible behind the forge and this appears to be the building now located on the northern side of 992 Gympie Road, set slightly back from the front of the block.

On 12 April 1921, Isaac White was awarded a contract for £180 to shift Vellnagel’s house, blacksmith shop, paint shop and stables across Gympie Road.2 It appears that only the forge (the longer timber building with the chimney) and the gabled shed visible in the historical photo of the eastern side of Gympie Road (probably the paint shed) have survived on the current site. The extension to the end of the forge was removed at some stage, probably prior to the relocation.

Vellnagel received title to his new land of just over three acres in August 1921 and continued to provide blacksmithing services to his customers.  A gabled extension was added to the northern side of the relocated forge probably in 1953 when the Brisbane City Council approved an application for an addition to the workshop. After August Vellnagel’s death on 3 September 1932, the property passed to Edward Jacob Vellnagel and Benjamin Henry Braun. By the 1990s, another extension had been added at the rear of the southern side of the former forge.

With the rise in private car ownership in Brisbane after World War Two, there was a corresponding downturn in the blacksmith trade. Possibly as a reaction to this loss of trade, Charles Vellnagel submitted a proposal to the Brisbane City Council, in September 1951, to convert the blacksmith site into an amusement hall with a 432 seating capacity. However as Chermside and Aspley made the transition from rural to urban communities, new trade came to Vellnagel’s blacksmith shop in the form of increased demand for metal security grilles, garage doors and gates. Harold Vellnagel and Son continued to operate their blacksmithing business until 2002, providing over one hundred years of continuous service to Chermside and surrounding areas. They have now relocated their business to Brendale.

The site of Vellnagel’s blacksmithing business was sold in 2004.

The two gabled timber buildings face Gympie Road, with the smaller building on the northern side set back from the front boundary.

The former forge has not been inspected internally but photographic evidence indicates that the southern wall has retained the original wall of wide timber slabs.

The smaller timber shed has two unevenly placed windows facing Gympie Road and a door and additional two windows on the northern wall.

as part of a former nineteenth century blacksmithing business, it provides evidence of early industry at Chermside when it was a rural outpost of Brisbane.

as a rare surviving example in Brisbane of nineteenth century blacksmithing buildings.

as evidence of the contribution of German immigrant, August Vellnagel and his family to the development of Chermside and the surrounding district since the 1890s

Vellnagel’s Blacksmith Shop on eastern side of Gympie Road prior to relocation. (Note timber shed on right). (photo – Chermside and District Historical Society, no date)