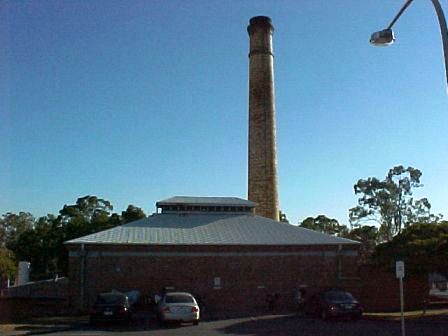 The Prince Charles Hospital Boiler House Chimney, constructed circa 1959 as part of a new laundry complex, is the only remaining component left from the infrastructure of the original Chermside Chest Clinic. The Clinic was opened in 1954 in response to the conversion of Brisbane’s predominantly rural outer districts into modern urban suburbs, which required increased medical facilities. After numerous expansions during the 1950s and 60s, the Chermside Chest Clinic was officially renamed the Prince Charles Hospital in 1974.

The Rode Road hilltop site for the hospital was chosen because of its prominent location overlooking the emerging post-war suburbs that were replacing the former “Green Belt” on Brisbane’s northside. Chermside, in particular, was significant amongst these modern suburbs for it received Brisbane’s first drive-in shopping centre and Chermside was chosen as the location of many of the prestigious Mater Prize Homes.

Prior to the construction of the Chermside Chest Clinic, the site was farm and bushland that belonged to the Staib Family. Staib Road located within the hospital’s grounds commemorates their former ownership of the site, while the adjacent Beneke’s Bushland is representative of the native vegetation that was cleared to make way for both the hospital and the surrounding housing estates.

The Chermside Chest Clinic commenced with just three prefabricated buildings that served as hospital wards for 186 tuberculosis patients. One full-time and two part-time doctors tended to the patients. The first Director of Nursing was Miss I. Grigg.

The chimney was constructed for the Chermside Chest Clinic around 1959, when the first Main Block was built to accommodate 380 patients. The chimney was part of the Chermside Chest Clinic’s new laundry complex. With the rise in Brisbane’s population and the subsequent expansion of Brisbane’s new northern suburbs during the early 1960s, the Clinic added new buildings to the site. Buildings C7, C8, C9, C10, a first and then a second Nurses Home (live-in quarters) and a Doctor’s Quarters had been added by 1964. The new facilities also allowed the hospital to treat children, particularly those with disabilities. Of the many buildings and other structures constructed for the Chermside Chest Clinic during its first decade of operation, only the chimney survives.

By 1970, the Chermside Chest Clinic no longer served just TB patients and a proposal was made to change its status to that of a hospital. The Queensland Government had a tendency to name its hospitals after members of the British Royal Family (eg Princess Alexandria Hospital, Queen Elizabeth II Hospital) and so it was proposed that the Chermside Chest Clinic be renamed the Prince Charles Hospital, after the heir to the British throne.

as a remnant of the Chermside Chest Clinic, which was built in response to population growth and the urbanisation of the City's emerging northern suburbs in the postwar period.

as a 1950's boiler and waste-disposal chimney.