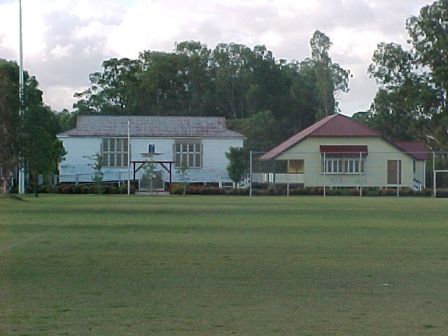 The Chermside Historical Precinct was created in 1997. The site contains the former Chermside School (1900) and the Sandgate Drill Hall (1915) and the Training Ship Voyager Centre Sea Scouts’ hall. The school building was moved to the site c1997; the drill hall in 2000; while the TS Voyager Centre was built onsite at the Hamilton Road Reserve (now 7th Brigade Park) c1964.

The site was previously part of the Hamilton Road Reserve. It was renamed 7th Brigade Park on 31 August 1996.  In 1998, prior to the relocation of the former Chermside School building to a site adjacent to the TS Voyager Centre hall in 7th Brigade Park, a Chermside Historical Precinct Steering Committee was established to manage the site. The Committee featured the Marchant Ward councillor Terry Hampson and the state Member for Chermside Terry Sullivan MLA as Joint Co-ordinators. They worked closely with Patrick O’Keeffe, the Chairman of the 9th Battalions War Memorial Museum Collection and Property Trust and Jim Whalan, President of the Kedron/Wavell RSL Sub-Branch. Original access to the Chermside Historical Precinct was via Playfield Street. Access is now via Kittyhawk Drive.

A school was opened at Chermside (then called Downfall Creek) on 9 July 1900 at 590 Gympie Road. The school building now located within the Chermside Historical Precinct was the first Chermside School classroom and was constructed in late 1899 and early 1900 for the Queensland Department of Public Instruction. After the Downfall Creek district changed its name to Chermside in 1903, the school followed suit. It provided education for children across a wide area of northern Brisbane and as enrolments rose so did the student accommodation problems. After World War 2, the opening of new schools at Wavell Heights (1947) and Craigslea in West Chermside (1972) decreased the enrolments pressure on Chermside School. The spread of Brisbane’s urban sprawl during the 1980s and 1990s that created new, outer Brisbane suburbs meant that Chermside became less attractive to new homeowners. This led to declining enrolments such that, by 1988, Chermside School had 4 teachers and only 72 students.

In December 1996, at the end of the school year, the Queensland Government closed Chermside School due to its decreasing enrolments. In 1997, the Uniting Church in Australia purchased the property. The Uniting Church generously donated the first (1900) school building to the local community. It was transported to 7th Brigade Park at Chermside on 28 May 1999 to become part of a community buildings precinct. In 2000, the Chermside & Districts Historical Society took occupancy of the former Chermside School building for use as offices and an archives centre thus retaining its community educational function.

Already on the site was a post-war sea scouts’ hall TS Voyager Centre. The 2nd Chermside Sea Scouts Group took out a first lease on the Hamilton Road Reserve site 1 October 1962. The lease was for a scout hut site and a later map of the lease site shows that the building had been constructed by 1968. The Royal Australian Navy has previously allotted the name Voyager to two destroyers. The first HMAS Voyager was lost during World War 2. On 23 December 1942, HMAS Voyager ran aground at Bentano Bay, Timor while evacuating the Dutch and Australian soldiers of ‘Sparrow Force’.  The second Voyager was a Daring class destroyer launched at Cockatoo Island, Sydney on 1 March 1952. It was lost on 10 February 1964 when it collided at night with the aircraft carrier HMAS Melbourne. HMAS Voyager sank with the loss of 82 crewmen in what became known as ‘The Voyager Disaster’.  Perhaps, as the name of HMAS Voyager was associated with two naval losses, the RAN decided to allocate it to a land-based facility such as the Chermside sea scouts hall. Thus the hall acquired the name TS Voyager c1964 and was probably built around the same time.

The Sandgate Drill Hall was completed at Bowser Parade, Sandgate in December 1915. It was placed in a central location being next to the Sandgate Post Office and across from the Sandgate Town Hall. With the commencement of World War 1 in August 1914, the Australian Government continued its program of building infantry drill halls for the training of local Australian Military Forces (militia) units that would then provide reinforcements for the 1st Australian Imperial Force.  Tenders for the Sandgate Drill Hall had been called on 18 February 1915. It was a ‘Type 4’ design, 60 ft x 30 ft infantry drill hall containing five offices plus a central, open-plan area. Adkins & Carrick won the tender to build the hall at a cost of £886.5.0.

The first unit based at the new drill hall was the headquarters of ‘D’ Company, Nundah. They had transferred from Nundah to the Sandgate Drill Hall by June 1916. By 1921, 2nd Battalion, 9th Infantry Regiment with ‘Area 2B’ occupied four of the offices (two each), with the fifth used by the Sandgate Rifle Club. As the only public hall within the Sandgate district, it was in constant use by a variety of community groups. It was the home of the Sandgate RSL plus the local Electoral Office (1920s-30s), a Creche and Kindergarten facility and a National Fitness Centre (1940s) and a Girl Guides hut and a Sandgate Teenagers Club venue (1950s). But it continued to be used for military purposes until its closure in the late 1990s.

In 1999, the Department of Defence closed the hall in preparation for the commercial sale of the Bowser Parade site. There was much public lobbying to retain the drill hall at Sandgate, particularly by the Brisbane City Council. In mid-1999, the Defence Department donated the former Sandgate Drill Hall to the 9th Battalions War Memorial Museum Collection and Property Trust that operated a small military museum at Gallipoli Barracks at Enoggera. The donation was made on the condition that the drill hall was removed from its Bower Street location so that it could be sold as a cleared site available for commercial redevelopment. A condition of the drill hall’s relocation was that it was to be placed with the same orientation at the Chermside Historical Precinct as it had at Bowser Parade, Sandgate. There were some concerns about the Chermside site to where the hall was to be relocated. The Defence Department noted:

“…there may be environmental issues concerning an area adjacent to the site proposed for the relocation of the Drill hall. Defence has been informed that an agreement has been reached financially that will ensure an appropriate artificial habitat is established.”1

The Chermside Historical Precinct has been the subject of numerous vandalism attacks since it was created in 1998. While graffiti on the three buildings is a constant problem, in April 2007, the historical precinct was the subject of a major vandalism attack that saw the balustrading torn from the former school building and damage inflicted on the framework of the school building’s main doorway.

Collections of different old buildings moved onto one site are a common tourist attraction in many Queensland towns. Two examples are the Caboolture Historical Village and the Beenleigh Historical Village. Brisbane’s only equivalent site was the ‘Early Street Historical Village’, based around the residence ‘Eulalia’ that was located in McIlwraith Street, Norman Park from 1965. It operated as a tourist attraction and also as a reception centre. When it closed in 1998, all of the buildings, except ‘Eulalia’, were sold-off, with the majority of buildings removed to sites outside of Brisbane. The Chermside Historical Precinct is different in that it is not a tourist attraction but, rather, a publicly owned community facility that utilises the old buildings that have been moved into the Precinct. This makes it unique in Brisbane.

as the Chermside Historical Precinct is the only one of its kind in Brisbane.

as the Sandgate Drill Hall is one of the few surviving infantry drill halls remaining in Brisbane.