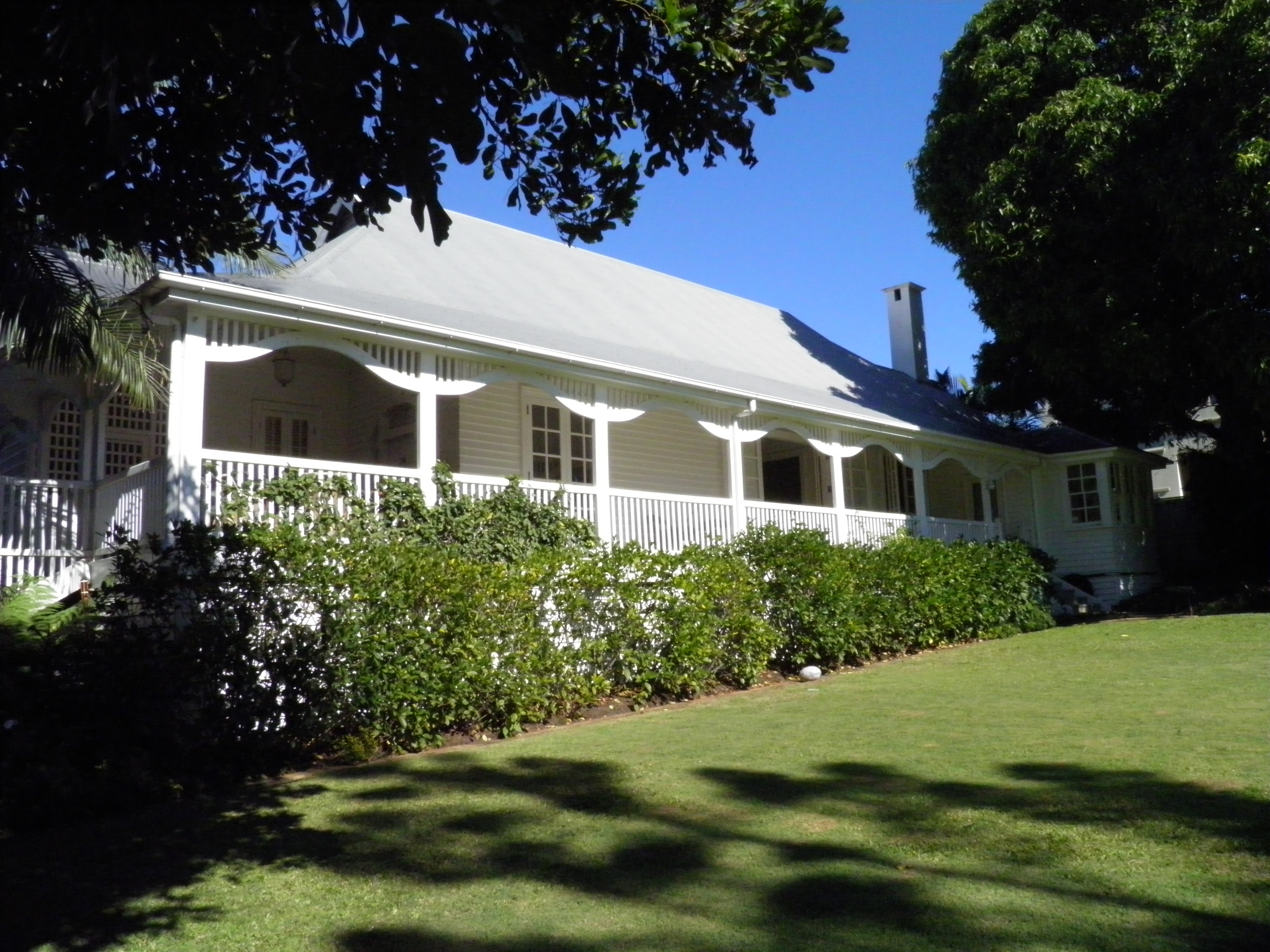 This graceful timber residence was built for John W.H. Grout, merchant, soldier and Spanish Vice-Consul, and his wife, Winnifred, in 1907. It was designed by prominent Queensland architect, Robin S. Dods, and illustrates some of the key elements of Dods’ work, for example the dominant roof, generous verandahs and simple yet sophisticated timber detailing. ‘Rangemoor’ was subsequently occupied for many years by obstetrician and paediatrician, Dr Charles A Thelander and his family.

‘Rangemoor’ was built for successful merchant and Vice-Consul for Spain, John William Huggins Grout, circa 1908. It was designed by Robin Dods, one of Brisbane’s most eminent architects and is one of several fine residences in the suburbs of Clayfield and Ascot designed by Dods for wealthy Brisbane families.

In the late nineteenth century, John William Huggins Grout was in a partnership as Charlton and Grout, stock and share brokers and commission agents, operating in Queen St, Brisbane. The partnership was dissolved in December 1899. Grout then joined the Queensland militia and was a Lieutenant in the Moreton Regiment, and vice president of its rifle club. He moved to Dalby in 1900 where he worked for the Queensland National Bank. Grout was instrumental in the formation of the Dalby Company of the Queensland Mounted Infantry and became its first Commanding Officer. By July 1902, Grout had returned to Brisbane where his occupation was recorded as a merchant. He also took up the role of Vice-Consul for Spain.

In the early 1900s, Clayfield and the neighbouring suburbs of Albion and Ascot were well established as fashionable addresses for the city’s professional and mercantile families such as the Trittons and the McWhirters. Many of the substantial houses built in the area were architect designed and surrounded by generous gardens with tennis courts or other recreational facilities.

‘Rangemoor’ was constructed on an acre of land in Adelaide Street purchased in the name of Grout’s wife, Winifred, in September 1907. In November 1907, Grout commissioned the firm of Hall and Dods to design their new home. The building was put to tender and erected for £1,280. The large, timber home displays many of the signature characteristics found in Dods’ domestic designs such as the dominant roof form, side entrance porch, generous verandahs and restrained timber detailing, as well as some Spanish or Moorish features which perhaps reflected Grout’s consular role. The wave shaped timber verandah valance was featured in at least two other Brisbane houses designed by Dods -  the 1902 Littledike residence in Drane Street (since demolished) and the Drake residence in Richmond Street, Morningside (also 1902).

Robin Dods attended the Brisbane Grammar School before training in Edinburgh as an architect where he was exposed to the influences of the Arts and Crafts and Art Nouveau movements. He worked in London before returning to Brisbane in 1894. After jointly winning a competition for the design of the new nurses’ home at the Brisbane General Hospital in 1896, Dods and Brisbane architect, Francis Hall established their architectural practice. Dods took on the role of principal designer for most of the firm’s projects, which ranged from hospital buildings (eg Mater Misericordae Hospital, South Brisbane 1908) , churches (eg St Brigid’s Catholic Church, Red Hill, 1913-14) and many commercial buildings.

Dods’ domestic architecture refined the design of the existing traditional Queensland house. His domestic designs were usually elevated timber houses with boarding enclosing the understory and screening the stumps. Adaptation for the humid Brisbane climate was a priority and the houses were carefully oriented and planned to take advantage of breezes. Roof ventilation and large verandahs also encouraged the cooling movement of air. Surviving residences designed by Dods in the Clayfield/Ascot area include ‘Lyndhurst’ (1896) and ‘Turrawan’ (1906, now known as ‘Clayfield House’).

John Grout died at Clayfield, Brisbane in 1918 as a result of complications from appendicitis. The property was held by his wife until 1921 when it was sold to Helene Thelander, wife of prominent Brisbane obstetrician and paediatrician Dr Charles August Thelander.  The son of Swedish immigrants, Thelander was educated in Brisbane and studied medicine in Edinburgh, before returning to Queensland. Helene died within a year of moving to the house.

Charles Thelander’s life was not without controversy. He was Chairman of the 1935-37 Royal Commission that gave a negative report on Sister Elizabeth Kenny’s treatment of poliomyelitis. Sister Kenny was a very popular Brisbane figure and a cousin of Thelander’s second wife. Charles lived at ‘Rangemoor’ until his death in April 1959, and the family remained there for many years before the property was sold in 1988.

Early plans of ‘Rangemoor’ show the house addressing Adelaide Street East with two large bay windows looking north across the verandah to the front garden. These bay windows have been removed and replaced with french doors. A lobby, living room and dining room occupied the front of the house and the western corner of the front verandah was enclosed as a study at some time prior to 1930. The kitchen, two bedrooms and a laundry opened onto the rear U-shaped verandah as did a passage way with access to the other two bedrooms. A brick fireplace at the front of the eastern wall of the house was once framed by curved timber arches and a pair of small windows on either side of the mantelpiece but these features have been removed. The brick fireplace has been replaced and now has a marble appearance.

The grounds were bordered to the west by Enderley Avenue. Originally, a shed and garage were situated behind the house to the south. A grass tennis court was later added on the western boundary at some time between 1915 and 1935. Photographs of the property from the 1940s and 1970s show mature trees and palms in the grounds. Some of these have been removed, particularly from the Adelaide Street East frontage.

In 1953, the acre of land was subdivided into three allotments. The Thelanders retained the house and over half an acre of land on the corner of Adelaide Street East and Enderley Avenue and sold the two lots at the rear. This parcel of land has remained the same size to the present day (2 762 m²) and the rear boundary is now quite close to the house.

In the late 1980s, an addition was constructed at the rear of the house on the eastern side. A further addition was approved by Council in 1992.  While these additions have altered the house and some original detailing has been removed, much of Dods’ original design is still apparent and the house is an important part of the historical fabric of Adelaide Street East.

‘Rangemoor’ is a substantial timber house designed in the Federation style. It has a large, steeply pitched metal roof which extends at a shallower angle over the wide front verandah. The verandah is decorated with a curving timber valance and simple timber balustrading and extends around to the eastern side of the house. French doors open onto the verandah (replacing the original bay windows) and the understorey is enclosed with timber boards.

There are several mature trees including a poinsiana tree (near the Adelaide Street East gates) which provide an attractive setting for the house.

as a fine architect designed residence which provides evidence of the development of Clayfield in the Federation period as a fashionable address for Brisbane's merchant and professional classes.

as a well-proportioned and designed residence with elegant timber detailing set in generous grounds with mature trees, the original timber driveway gates and a timber fence which is sympathetic to the style of the house.

.as a good example of a substantial residence designed by prominent Brisbane architect, Robin S Dods.