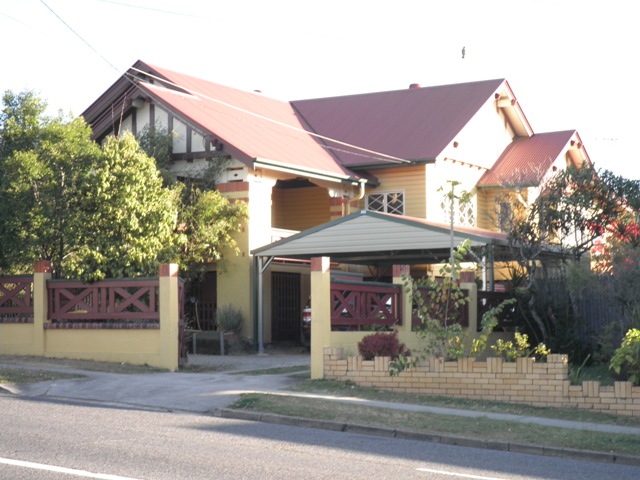 This house was designed in 1932 by prominent Brisbane architect Douglas Roberts and is a fine example of his domestic designs. Built for Mr and Mrs Henry Roberts, this residence makes a strong contribution to the Cavendish Road streetscape and demonstrates the residential growth of Coorparoo in the interwar period.

The initial settlement of the area now known as Coorparoo was relatively slow. Coorparoo land sales occurred from 1856, and development gradually occurred as purchasers, mainly farmers and land speculators, bought land at these early sales. By 1888, the locality had a population in excess of 2,000 people, residing in over 550 homes. The population growth in the area saw ribbon development along the main transport arteries of Logan Road and Old Cleveland Road, while there was pocket development in areas such as Stones Corner.  Wealthier residents lived on the hill tops, especially along the Cavendish Road ridgeline.

From the mid-1870s the population of Brisbane increased markedly, with a corresponding rise in residential settlement  Brisbane’s population had grown to 47,000 by 1881. It was during the 1880s that the greatest changes to the residential settlement patterns occurred.  An expanding economy, expansion of infrastructure including extended tram and train services, improved communication systems, and an increase in immigration to Brisbane, had all assisted this change. By 1891 Brisbane’s population had increased to over 100,000.

By the 1890s, the Stones Corner and Coorparoo area included a socio-economic mix that ranged from farmers to politicians. These included Frederick Brentnall M.L.C., James Stodart M.L.A. and Walter Henry Barnes M.L.A., business men such as Nathaniel Lade, James Hipwood and Reuben Nicklin and important public servants such as Edward Deshon C.M.G., Reginald Mulholland King, James Evan Burstall and T.W. Connah. Coorparoo, while not distant from the city, was a semi-rural area until the 1910s.  But with the extension of the tramline to Stones Corner in 1915, the population began to increase rapidly.

Cavendish Road, with its plethora of hilltops, was one of the important Coorparoo roads.  This road developed into an elite address for a small number of wealthy local residents.  By the 1890s, there were six such families living along Cavendish Road between Old Cleveland and Chatsworth Roads and in 1914 this number had increased to ten. They built their large houses on acreage sites, employed domestic staff and had such amenities as kitchen gardens, orchards, fowl houses and tennis courts.

The interwar period heralded a period both of residential expansion and developmental consolidation in Brisbane.  With the extension of tramlines, suburbs such as Greenslopes, Camp Hill and Coorparoo experienced major increases in residential development throughout the 1920s and 1930s.

The lot on which the house at 203 Cavendish Road was built was originally part of Brentnall’s 23 acre estate in which he had purchased in 1884.  After Brentnall’s death in 1925, the land was subdivided and sold. This 26.6 perch lot was sold twice before Henry Roberts bought it in June 1928.  By 1930 the Roberts family was residing in a house on the property known as ‘Dalesford’.

In November 1932, Roberts had plans for a new tiled residence on Cavendish Road, constructed by the Queensland Building and Construction Company, approved. It was to cost £950 and was designed by Douglas F.W. Roberts who, despite sharing a surname, does not appear to be related to the owner.

Douglas Francis Woodcraft Roberts was a local architect, the son of a master builder of the same name.  He had worked as a draftsman in his father’s office from 1922-1929.  Although registered as a Queensland architect in 1930, Roberts worked in Sydney and travelled overseas before becoming one of a group of young Interwar architects designing buildings in Brisbane in contemporary styles, such as Old English and the more modern Functionalist. This house is one of the earliest examples of his work. Other examples of his domestic work in Brisbane include Kent House in Oriel Road, Clayfield (1938), the Rhoades’ home in Samford Road, Enoggera (1939), the MacMillan home in Bonney Avenue, Clayfield (1938) and the State Heritage listed Chateau Nous, Rupert Tce, Ascot, built in the Functionalist style in 1938.  In poor health, Roberts transferred his business to Conrad and Gargett and died in 1941, aged 35.

A mortgage was registered over the property in February 1933, and it is likely that this funded the completion of the house. The house, named ‘Mairita’, was inherited by Alice Rita Roberts in 1963 following the death of her father Henry.  She retained ownership until her death in 1980, when the house was sold.

as the house was built in 1932/3 in a period of suburban growth in the Coorparoo area when the area was experiencing major residential expansion.

as a fine example of the domestic work of Brisbane architect Douglas Roberts.