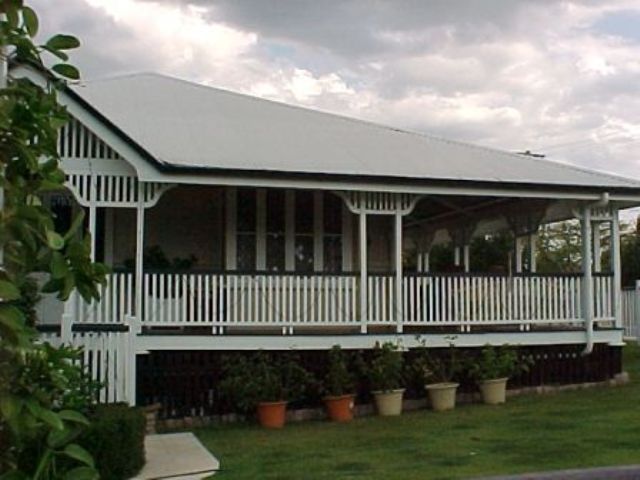 This low-set federation style bungalow was constructed in 1914 by local architect Henry Hayward Priest for well-known local identity John Andrew Watson, who was Commissioner of the GIO from 1920 to 1945. John Watson saw the government insurance office through the Depression and World War 2. His son Kenneth also became a well-known leading orthopaedic surgeon in Brisbane.

In 1915, Coorparoo experienced rapid population growth with the expansion of the tramline to Stones Corner.

Although Coorparoo land sales occurred from 1856, development was gradual with mainly farmers and land speculators purchasing land at these early sales. It was not until the mid-1870s that the number of children living in this farming district led to the agitation for a school. The Coorparoo School finally opened in January 1876. By 1888, the locality had a population in excess of 2,000 people in over 550 homes. The population growth in the area saw ribbon development along the main transport arteries of Logan Road and Old Cleveland Road; pocket development in areas such as Stones Corner; with the wealthier residents living on the hill tops especially along Cavendish Road ridgeline.

By the 1890s, the area included a socio-economic mix that ranged from farmers to politicians. These included Frederick Brentnall M.L.C., James Stodart M.L.A. and Walter Henry Barnes M.L.A., business men such as Nathaniel Lade, James Hipwood and Reuben Nicklin and important public servants such as Edward Deshon C.M.G., Reginald Mulholland King, James Evan Burstall and T.W. Connah. Coorparoo, while not distant from the city, was a semi-rural area until the 1910s. Then the population began to increase rapidly due to the extension of the tramline to Stones Corner in 1915.

One of the important Coorparoo roads became Cavendish Road with its plethora of hilltops. This road developed into an elite address for a small number of wealthy local residents. By the 1890s, there were six such families living along Cavendish Road between Old Cleveland and Chatsworth Roads and in 1914 this number had increased to ten. They built their large houses on acreage sites, employed domestic staff and had
such amenities as kitchen gardens, orchards, fowl houses and tennis courts.

Glenena was one of these houses. It was designed and built by Henry Hayward Priest in 1914 for recently married John Andrew Watson and Mina (Ena) Pauline Maurice. Priest was John Watson’s uncle. The boundaries for this large house were Woodhill Street, Derby Street and Cavendish Road. The Watsons, however, built their home near the corner of Woodhill Street and Cavendish Road and used the open space on Derby Street side for their stables, a kitchen garden, and as a space for their children to play. The land was re-subdivided and part sold to the C.P. Wymans about 1937.

Originally, the house had an L shaped verandah wrapping around one corner of the building, with the master bedroom gable appearing above the roof. Symmetrical stairs with stepped balustrading were at the centre of the front verandah while similar stairs with gable pediment provided access to the side verandah. Divided or symmetrical steps were a feature of late nineteenth and early twentieth century Queensland homes, while stepped stairs only came into fashion later on.

A feature of this 1914 house was the chimney that provided a back to back fireplace for the dining room and kitchen, and for the copper in the laundry downstairs. Three bedrooms were on one side of a central corridor while arched room dividers opened onto the lounge and dining room.

An increase in family size of four sons and one daughter necessitated enlarging the house. A verandah was added on the northern (Woodhill Street side) for social and family purposes, while the other side verandah was partitioned and used for sleeping areas. This additional verandah balances the dwelling with the new side verandah having a symmetric stepped stairs surmounted by a gable pediment and the same verandah balustrade and balance. A rectangular bay window, like that for the master bedroom, was added to the dining room.

John Watson was the Deputy Commission of the Government Insurance Office (G.I.O.) when it was established in 1916 and he succeeded Commissioner Goodwyn when the latter resigned on 31 October 1920. The Queensland Labor Party created the G.I.O. to deal with Workers’ Compensation, Workers’ Dwellings mortgage insurance and to compete with private insurance companies. As the new Commissioner, Watson
managed this state enterprise through the boom period of the Roaring Twenties, the terrible financial conditions caused by the Great Depression and throughout the Second World War. Soon after the war’s end, Watson took his retirement on 30 December 1945.

Commissioner Watson was one of the first Coorparoo residents to own a car. Like most of the affluent residents of Cavendish Road, the Watson family had servants and the children attended Coorparoo State School before completing their education at private schools. Watson’s son Kenneth John Watson became an orthopaedic surgeon, the insurance industry attracted another son John, another son Jeffrey became a
urologist and fourth son David was a mine manager.

Kenneth Watson was a leading orthopaedic surgeon with room at 113 Wickham Terrace. He and his wife, Mary Edgeworth Rockliff, and their five children were the next owners of Glenena. During the early 1960s, Dr Watson had the arched room dividers linking the dining room, lounge and hall removed to create one large elegant room or lounge. He also closed in part of the end of the verandah, which faced
Woodhill Street, to create a bedroom.

Since the 1970s, much of Coorparoo’s housing stock has been replaced with unit development, and this is particularly noticeable along the hilltops and ridges of Cavendish Road. While this house has been used as a rental property since Dr Watson’s death a few years ago, it is one of the few extant large houses of a former era.

The mature plantings include a Norfolk pine planted in memory of John Watson killed while on active service in December 1944. Cocos palm trees planted in the 1920s along the fence line are typical of the time and enhance the house.

Glenena is a timber-framed and timber-clad single storey house elevated on stumps.

The corrugated iron roof with its gabled projections, has Federation era complexity and is a dominant element of the house. The main roof extends over the wide, open verandahs. These have simple timber slat balustrading and elegant, slender paired timber posts with valance brackets.

The house has a variety of fenestrations. Both the front bedroom and large lounge room have bay windows with leadlight casement windows. A number of doors also feature coloured glass sidelights. Doors have fanlights above.

The chimney, that served both the large family room and kitchen fireplace, is a prominent element. During the 1960s renovations some alterations to these fireplaces were carried out. A bathroom is located in a verandah corner near the bedrooms and the laundry under the kitchen still has its original copper.

Although the house has experienced modifications in the course of time it still retains most of its integrity.

The mature trees and shrubs on the site, particularly the Norfolk Island pine and the
Queen Palms along the perimeter provide the house with a natural graceful setting.

As a large Federation-style, architect-designed residence built in a landmark location at Coorparoo

As a good example of a later, simpler Federation Style architect-designed residence with its refined proportions, elegant detailing and harmonious form.

As the residence of John Andrew Watson, the second Commissioner of the SGIO who managed the government insurer during the interwar period and then of his son, leading orthopaedic surgeon Kenneth Watson.