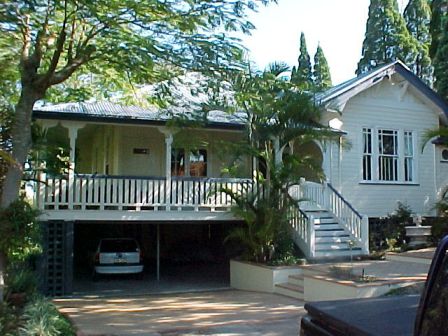 This Federation style house was constructed in 1915 for Arthur Deshon, and his wife Violet. Arthur Deshon was a government appointee to the Land Court from 1931 to 1946, and lived at ‘Wynyard’ until 1956. In 1964, the original front gate entrance was demolished, the house relocated to another part of the block, and the remaining land subdivided. However, the house remains largely intact in a prominent position in Coorparoo, and is a fine example of an early twentieth century Asymmetrical Bungalow style house built during the federation era.

The site containing this residence was originally part of a purchase of crown land made by John Brown on 30 March 1865. Brown, who was a resident of Brisbane Town, paid ₤43 for 43 acres of uncleared land described as Portion 179 in the Parish of Bulimba. Brown transferred Portion 179 to Julius Holland, of Brisbane, on 21 May 1867. Holland, in turn, sold the property to Nathaniel Lade on 19 January 1885.

Lade subdivided Portion 179 into seventeen allotments and disposed of these through a land sale held between 1885 and 1887. The first to be sold were Lots 4 to 12 and Lot 17, which went to Edward Deshon on 11 February 1885. Deshon obtained the largest slice of Portion 179 by buying a total of 29 acres, 1 rood and 10.5 perches of land. Edward Deshon, a Crimean War veteran, arrived in Queensland in 1862, where he joined the civil service. He became Under-Secretary for Lands and he was appointed to the first Land Court. By 1889, he had become Auditor-General for the Queensland colonial government and he was awarded a Companion of the Most Distinguished Order of St. Michael and St. George (C.M.G.). In 1885, he bought land at Cavendish Road, Coorparoo where his family home “Woodhill” was erected. He later bought land further along Cavendish Road at Loreto Hill, that is now the site of Loreto College.

The last block to be sold was Lot 14, which was purchased by William Henry Griggs on 30 December 1887. Griggs’ total acquisition came to 3 acres, 1 rood and 8 perches of land. On 31 January 1887, he mortgaged Lot 14 through John Kingford, obtaining a loan of ₤125. The next year, on 21 April, Griggs sold Lot 14 to Albert Edward Nills. Nills also used the block of land for investment purposes. The widow, Jessie McDearnnid financed a loan for ₤300 on 3 July 1888. Lot 14 was transferred to a new owner; Nathaniel Bridges Lade on 16 January 1891. Lade mortgaged the land for ₤168 on 16 January 1891. Albert Edward Wills provided the money. Mary Darling Howling then took ownership of Lot 14 on 14 October 1898. The Brisbane Permanent Building and Banking Society provided Howling with a ₤130 mortgage on 28 March 1901. On 22 October 1909, this building society took control of Lot 14. On 31 October 1913, Arthur Papham (also spelt Popham) Deshon, the son of Edward Deshon, added Lot 14 to the property that his father had purchased in 1885.

Arthur Deshon decided to subdivide Lot 14 into two parts. A total of 1 acre and 32 perches of this land (resubdivision B) was sold to John Albert Cleeve on 5 November 1913. This left Albert Deshon with 2 acres and 16 perches of land that was designated as resubdivision A of Lot 14. In 1915, Deshon took out two mortgages on his land. The first mortgage, for ₤600, was obtained through Thomas Harkaway Chandler on 4 February. Chandler also lent Deshon a further ₤60 on 31 December 1915. It is thought that these mortgages were used to finance the building of the residence situated at 44 Lade Street. The residence was specifically sited on a hill overlooking the Coorparoo district. It was completed during 1915 and became the new home of Arthur Deshon and his wife Violet Brenda Deshon. By 1937, their home had been given the name “Belgaum House” as that section of Lade Street between Cavendish Road and Marriott Street was originally known as Belgaum Road.

Arthur P. Deshon is first listed as a recipient of mail in Coorparoo in the 1915-16 edition of the Queensland Post Office Directories. Arthur Deshon was born on 27 December 1876. Arthur followed in his father’s footsteps by joining the Queensland state public service. He was appointed to the Land Court in July 1931 and he remained in this important position until his retirement in December 1946, at the age of 70.

On 24 September 1927, Violet Deshon regained 3 roods and 12 perches of land from John Cleeve to add to their site. This land purchased covered subdivisions 1, 2 and 3 of resubdivision B of subdivision 14 of Portion 179. Subdivision 1, a 2-rood block of land at the corner of Lade and Marriott Streets, was resubdivided into three residential blocks. Violet sold a 32 perch block to Karl Emil Bucher on 25 October 1933 and a similar block to Bridget Danaher on 23 September 1937. Violet had amalgamated the remaining 16 perch block (resubdivision 3) in with subdivisions 2 and 3 that she had bought from Cleeve. A new title for this amalgamated block, that faced Lade Street, was issued on 18 October 1933.

As an employee of the Lands Department, Arthur Deshon was well aware of the need for suburban house blocks in expanding pre-war suburbs such as Coorparoo. Thus in a series of complex subdivisions, Deshon began to create the layout of the existing property at 44 Lade Street. In 1939, he organised the disposal of most of his wife’s land but retained a 16 perch block for himself. This strip of land, described as resubdivision 3 of subdivision 3 was transferred to Arthur by his wife on 9 January 1940. This strip of land became the basis of the current driveway leading to 44 Lade Street. But in 1939, it was a tradesman’s entrance to the Deshon property as the front entrance to “Belgaum House” was from Marriott Street.

The Deshons continued to sell off more of their property in succeeding years. Muriel Pearl Newbold bought a block totalling 1 rood and 4.6 perches on 8 September 1947. The Deshon’s son, Thomas Edward Deshon and his wife Thora Elizabeth Deshon received a 24 perch block on 15 October 1948. A tiny piece of land covering only 7 perches was cut from the back access block and transferred to Mary Ellen Cramond on 9 July 1954. Boaz Blumberg obtained 24.7 perches of land on 9 July 1954.

On 15 November 1956, Arthur Deshon finally sold his remaining 2 roods and 34.9 perches of land that included “Belgaum House” to Patricia Laurie Ryan and her husband Dermot Clark Ryan. Arthur Deshon moved to Hillcrest Avenue in Camp Hill, where he died, aged 80, on 12 September 1957. His funeral was held at St Stephen’s Church of England Coorparoo and his body was then taken to Mt Thompson Crematorium.

The Ryans applied to the Brisbane City Council on 20 December 1963 to have “Belgaum House” moved further up the hill and turned to face the back access road leading to Lade Street. Permission for this removal was granted on 3 January 1964. The Ryans had the property resurveyed during 1964 in preparation for the further subdivision and sale of the Deshon land that faced Marriott Street. This land sale saw the demolition of the original front gate entrance to “Belgaum House”. The Deshon family home, sited on a new 36.3 perch block of land, was sold to Bruce George Castell Walker and his wife Winifred Grace Walker on 20 October 1964. When Bruce Walker died in 1990, the property was transferred to the sole ownership of Winifred Walker. The current owners Mark and Debbie Brittains took possession of the property on 3 March 1998.

as a grand home built during World War I in a landmark location at Coorparoo.

as the former residence of Arthur Deshon who was a state government appointee to the Land Court from 1931-46 and a member of a prominent Coorparoo family.